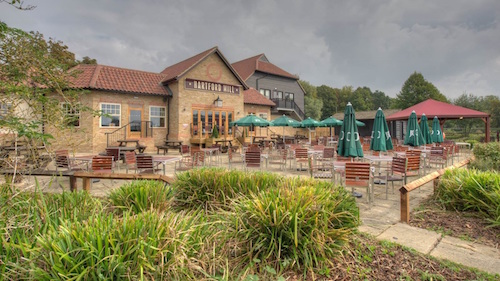 A pub which was destroyed by fire last year has been completely rebuilt and is now enjoying a roaring trade.

The reconstruction of the Hartford Mill Pub in Huntingdon was carried out for The Spirit Pub Company by Main Contractors Orientrose Contracts Limited, with PDS as project architects. Since Orientrose Contracts was formed as a specialist building contractor in 2004, the company has completed numerous projects in both the leisure and commercial sector. These have included pubs, restaurants, hotels, clubs, offices, dental surgeries and storage units.

The project was completed on schedule and was re-opened in August 2014 with a party for the firefighters who valiantly fought the flames a year ago.

The riverside pub overlooks a marina and features a large terrace to the rear with views over the River Ouse. There is also an outside bar and grassed seating area to both sides of the building. All that remained of the original pub were the existing foundations and a children’s play barn known as the Wacky Warehouse.

The building is structured around a steel frame with brick external elevations, hardwood framed windows and a pitched mansard roof to the front, concealing flat roofing behind.

Additional work included the renovation of the patio area to the rear of the building and improvements to the children’s play barn.

Last year more than 40 firefighters from eight crews joined to battle the blaze using jets, light portable pumps and an aerial appliance. After four hours the fire was extinguished but the pub, living quarters and the roof of the building were destroyed and the remaining unsafe structure was demolished. The function room was saved, but suffered substantial smoke damage.

“Out of the ashes has risen a pub that is bigger and better than before with an expanded dining area and a newly-improved Wacky Warehouse soft play centre for the kids. It’s completely different inside now. The layout is more modern and it is much lighter. The kitchen has been redesigned and the toilets have been moved.”

Spirit Pubs aim to be the number one hospitality company in the UK by being regarded as the best employer, delivering the best guest experiences and generating the best returns for their shareholders in the hospitality industry. The company has a high quality estate of over 1,200 pubs nationwide and a strong portfolio of award winning brands.

The company’s managed division contains over 750 high quality pubs, many in prime locations and owns more than 450 Leased pubs in their Leased division, which is one of the highest quality estates in the sector.