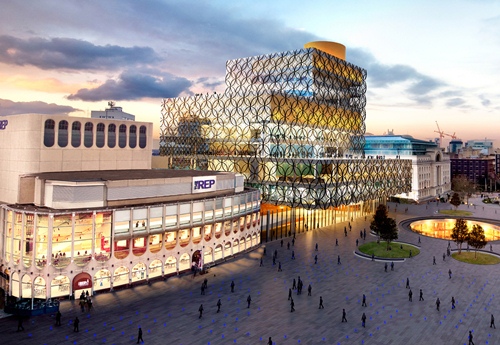 The multi-award-winning new Library of Birmingham building – the largest public library in Europe – is the city’s newest icon, receiving accolade after accolade, 12 months after its completion.

The £188m library has won a RIBA National award in addition to being crowned RIBA West Midlands Building of the Year, as well as being successful in two special categories, with Birmingham City Council named as Client of the Year for the Library project and Patrick Arends of architects Mecanoo named Emerging Architect of the Year.

In addition, the library’s construction partner, Carillion, was awarded the 2014 Considerate Constructors award.

“We have just celebrated an amazing first year after the building was opened in September 2013 with 2.7 million visitors. And this at a time when people are questioning whether a library is still relevant today – well I think we have answered that one pretty conclusively!

“Carillion did a good job. They engaged really enthusiastically with the scheme and delivered good quality work. I was particularly impressed by their commitment to the values of the library and the community. One of the agreements we had with Carillion – which they exceeded – was to offer a number of apprenticeships to local people from the long term unemployed, as well as to offer work to homeless people.”

The 31,000 sq m building has a basement level with nine storeys above and incorporates an impressive host of facilities including: storage for 800,000 volumes; 1,000 study spaces; around 25 miles of archive storage for books, manuscripts and photographs; a 300 seater theatre, a conference suite; events and performance spaces; meeting facilities; a music library and a children’s library.

There is also an exhibition gallery which is hosting an exhibition entitled ‘Voices of War’ commemorating the outbreak of World War 1. Other facilities include a Shakespeare Memorial Room, workshops, staff accommodation, a cafe and a shop.

Another important feature of the building is that it has been designed to be highly sustainable with a number of features built in, including partly natural ventilation and grey water harvesting.

The internal design centres on a pivotal atrium at the heart of the building, with a layout that lends itself to being a truly public and civic building,

The building exterior is largely glazed, with the glazing enclosed by a metal frieze. The design features two garden terraces and an outdoor performance amphitheatre, and on the top level a prominent golden rooftop rotunda houses the Shakespeare Memorial Room, crowned by a brown roof hospitable to local wildlife

According to architects Mecanoo, A cantilevered volume not only provides shelter at the entrance, but also serves as a grand balcony with a discovery garden. The circular courtyard cut out of the square is a protected outdoor space that invites daylight deep into the building.

Visitors move from one floor to the next through interconnected and overlapping rotundas that provide natural light and ventilation. Ever-changing vistas unfold through the building’s delicate filigree skin of interlocking circles, inspired by the tradition of metalwork in this former industrial city.