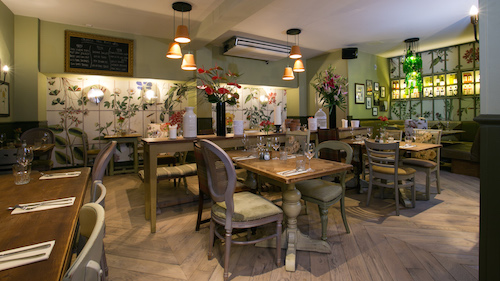 Dramatically upgrading facilities throughout, including the creation of a brand new hotel, is a wide ranging refurbishment project just completed at the Orange Tree Public House in Richmond.

The project included the refurbishment of the ground floor bar, the construction of an extension, the conversion of previous staff accommodation on the first and second floors to create a hotel and the creation of a further bedroom in an attic space which previously contained water tanks.

Main contractors were Stenball Construction; architects were Fusion by Design and PSE Associates were the project managers.

Within the ground floor area of the public house, the interior was stripped out, with the fixed seating in the front bar being retained and refurbished and seating in the back bar being stripped out and replaced and a new coffee station being installed. A new tiled floor apron was laid around the bar, new timber flooring was laid to replace carpeted areas and existing timber flooring was refurbished.

A new dining area known as Fenton’s Dining Room has been created to the rear of the building.

“The scheme concept was based on a fictional character we invented and called Mr Fenton, who was supposed to have previously occupied the premises. The overall look and feel of the design in different areas of the building was based upon his imagined pursuits and interests including sports such as fishing, rugby and hunting, as well as walking in Richmond Park and botany. For example, the bar area is focused on Mr Fenton’s sporting interests, as the public house is often frequented by rugby fans on their way to Twickenham. The botanical theme is in evidence in the dining area, which has a Victorian influence.”

Works to create the new hotel included internal reconfiguration and conversion of the original rooms to form 13 new en-suite air conditioned bedrooms. This element of the scheme also involved the creation of extra space by stripping out the original public house toilets from the first floor and relocating them to the basement, which involved a complete new fit out. In addition, a former attic containing water tanks has been converted into a luxury bedroom within the eaves featuring a four poster bed and a bath and incorporating new dormer windows.

A small single storey raised extension incorporating an additional two bedrooms and a fire escape route has also been constructed to the rear of the building. The original building has been re-decorated throughout, including wallpaper and specially commissioned prints for the dining room and reception areas.

“Everyone concerned is happy with the scheme including the client who now has a new hotel, which they hope will be a productive space for them. The pub refurbishment has gone down really well. Before the project it was a little Spartan and masculine, so we have added more feminine touches to attract a different clientele” said Cheryl.

Located barely a stone’s throw from Richmond Station and next to the famous Orange Tree Theatre, the Orange Tree is as much about service and quality as it is about it’s history and rugby connections. Managed by Hans Arthur, the Orange Tree prides itself on being a historic landmark among Richmond’s public houses.

Fiske Decorators are expert decorating contractors specialising in the leisure and retail industry. The firm have been in operation as a limited company for nine years and since their inception have undertaken numerous hotel, pub, shop and restaurants projects for a plethora of prestigious clients.

Clients include Punch Taverns, Enterprise Inns, Youngs, BT, Carillion and Stenball to name but a few. Premier Hospitality caught up with one of the firms Directors, David Fiske, to find out more about the company’s latest project; The Orange Tree. David said:
“We acted as the main decorating contractor for The Orange Tree project undertaking all decorative works and were on site for five weeks. It was important to be involved with this project as it is a popular, well known pub in Richmond which was a great project to work on.
“We pride ourselves on our quality finish and undertaking projects within budget and on time.”