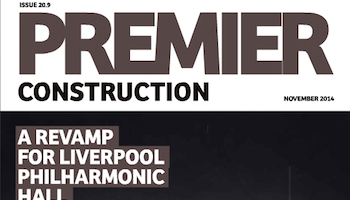 Dear readers, Welcome to the latest edition of Premier Construction magazine. In this month’s issue we take a look at the Queen Elizabeth Olympic Park project […]

In this month’s issue we take a look at the Queen Elizabeth Olympic Park project in Stratford; we get our popcorn ready in preparation for the completion of the Odyssey Cinema in St Albans; and we head to Cardiff to check out The Smoke Haus.

A £70m project is currently underway to transform the stadium used for the London 2012 Olympic and Paralympic Games into a multi-use venue. Works are well underway at the venue in Stratford – which will be known as the Queen Elizabeth Olympic Park – and once complete will become the permanent home of West Ham United Football Club. Bam Nuttall Balfour Beatty is carrying out the project, which, when complete will have involved 5,000 people working 2 million man hours.

Meanwhile, a landmark art deco cinema threatened with demolition has been saved thanks to a £2 million project to dramatically restore it to its former glory. The previously neglected and derelict former Odeon Cinema is being restored to create the newly named Odyssey Cinema, in a project nearing completion in London Road, St Albans. The project to restore the building, which has been described as ‘one of Britain’s most stunning art deco cinemas’ is being headed by James Hannaway, who previously led the campaign to restore The Rex in Berkhamstead which re-opened in 2004.

He commented: “When it’s finished, it will be glorious.”

And finally, The Smoke Haus – a 6,000sq. ft. 200-cover American-style restaurant has recently opened in Cardiff following a project described as “a joy” by the client. Located on Mary Ann Street, this is the second venue for The Smoke Haus, with the first already a success in Swansea. Specialising in BBQ ribs, burgers, steaks, sandwiches, pork and brisket and foot-long hot dogs, The Smoke Haus was established by managing director Mark Power who has spent 20 years working in the catering industry and has travelled around America where meat and barbeques are hugely popular.

“The restaurant’s theme is very much inspired by my time in America and my love of the food there, which has now become massively popular in the UK. Luckily we’re a little bit ahead of the game when we opened up in Swansea two years ago.”

With all this and more, join us as we continue to explore the beautiful developments that shape our landscape.