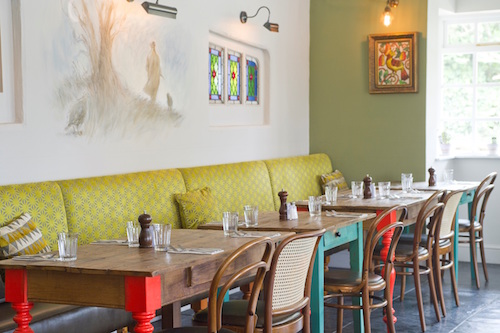 Comprehensively refurbished after being stripped to shell, then utterly transformed into a stylish country dining pub of great character, The Poacher and Partridge has just re-opened following a project that has delighted both client and customers alike.

The (approximately) seven month project for Elite Pubs was undertaken by a site team led by Trevor Cain, who acted as main contractor and project manager on the scheme and has carried out a number of other projects on pubs owned by the client.

New reclaimed tiled flooring from a French chateau was laid and new fixtures and fittings including a bar and fixed seating were installed, together with a new sound system and new toilets. A new private function room was also created.

Upstairs, staff accommodation has been extensively refurbished and the entire building was re-wired and re-decorated, with new heating and boilers being installed throughout. Reclaimed materials including bricks, tiles, railings, stained glass and oak were used extensively throughout the project to add character and ensure an appearance in keeping with the building which was constructed in the 1930s.

Externally, the elevations of the building were greatly enhanced by the addition of white weatherboarding and the construction of a large custom-made lych-gate style oak porch. The roof has also been refurbished and original murals were specially commissioned to enhance the oak porch and bar area.

Further works included the construction of foundations for a new barn, which will be built next year.

“The project included a lot of work, was finished on schedule and was very successful with everyone working as a team”, said Trevor Cain.

The Poacher and Partridge is nestled among the orchards and fields of the Kentish countryside, close to the famous All Saints church with its Marc Chagall windows.

Boasting both unusual and beautiful features internally, as well as a beer garden with views across meadows, The Poacher and Partridge offers seasonal cuisine, tapas and ales, as well as an extensive selection of wine direct from the barrel.

All food is seasonal, cooked fresh and is sourced from local suppliers wherever possible. Cuisine is of the highest quality and created by an expert chef using a wood fired oven.

Then there’s a whole range of wood fired pizza options such as The Poacher’s pocket – with pepperoni, fennel, chilli, baby mozzarella and oregano; The Poacher’s net – crab, prawns, corn, chilli and coriander and The cheeky Poacher – goat cheese, roasted beetroot, pecans, and caramelised onion – just to name a few of the many tempting flavours on offer.

Desserts come in many forms including Amaretto crème brulee with short bread biscuit;

Elite pubs are an award-winning group of five friendly dining pubs in Kent and Sussex.  Each one is full of character, steeped in history and set beautifully within its own grounds.  Elite pubs pride themselves in offering each guest a wonderful dining experience with outstanding service.

Elite pubs are headed by Martial Chaussy who financed his first pub, the Great House in Kent, by borrowing against his house. The pub was a success and the group has since gone from strength to strength.