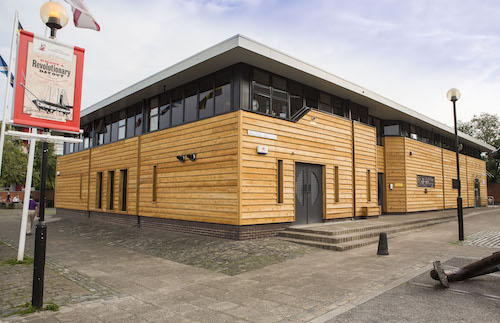 An £800,000 refurbishment project to the former Maritime Heritage Centre (MHC), situated on Brunel Square in front of Brunel’s ss Great Britain, has now been completed.

The venue has been transformed into a new education and exhibition space, as well as providing a 250 seat conference and events hall thanks to a grant from the Arts Council.

The £800,000 project has freed up the Grade II* Drawing Office for an exciting new project; The Being Brunel Project. Being Brunel will see the Drawing Office and the partly derelict 20th century buildings that run along the starboard side of the ss Great Britain transformed into a brand new visitor experience, allowing visitors to step into Isambard Kingdom Brunel’s world.

Premier Construction caught up with Gary Musson, Special Projects Manager at the ss Great Britain Trust, to find out more about No 1 Brunel Square. Gary told us:

“The building was originally built in 1984 to house some of the collection from the National Maritime Museum in Greenwich. After numerous complications this didn’t go ahead and so the building was never used. The ss Great Britain Trust acquired the building from Bristol Council and decided to use it as part of the SS Great Britain museum.

“After many years if being dormant it was decided that the space would be ideal to relocate staff into, as well as a commercial space that could be hired out and therefore bring in much-needed revenue for the charity.”

Works began on site in January 2014 with WSP, Arturus Architects, Chapel Quantity Surveyors and main contractors HPS Ltd working alongside the ss Great Britain Trust to bring No 1 Brunel Square to life. The building’s existing mezzanine level was substantially extended meaning the staff which were being relocated had a large, open plan and airy office space to work in.

The first floor now contains six private offices for the Trust’s directors and managers as well as a plethora of desk space for other employees. The venue contains three entrances for staff and client; staff can enter the building and follow a large staircase up to their newly renovated open office space.

Gary said the old office building was very confusing layout-wise and so this new high vaulted space is a breath of fresh air for all those using the facilities. The building has a pitched roof and two large windows that look down into the downstairs event space again adding the open plan feel of the building. Around the perimeter of the building low level windows have been installed which offers an impressive panoramic view of the surrounding area

Those entering the events space can enter the venue via a set of automated doors. The space holds space for 250 people as well as a dual placement of projector screens on two different walls. The high level walls comprise air conditioning and ventilation systems, as well as vibrantly coloured fabric panels which soak up the sound, as well as represent the Trust’s corporate colour scheme.

The events space can be sectioned off by moveable oak panels which can be used to create additional teaching rooms and break out spaces if required; the moveable sections can also be fully opened up to cater for larger events.

The downstairs space also contains a large kitchen which catering teams can utilise to prepare food and drink for large events. The glass meeting space also has its own separate kitchenette enabling those within it to be completely self contained.

Roller glazed sectional doors at the back of the events space are still being fitted which, when completed, will bring yet more light into the vast space. The large glazed doors caused a slight delay to the project due to planning consent restrictions and so it will be another six weeks before they are fitted.

The rest of the project was handed over to the Trust on the 30th July 2014 and all of the staff are now settled in their new offices.

“I have been here nine years now and have seen a lot of change and to be involved with this groundbreaking and historical project, that isn’t about the ship, has been great.”