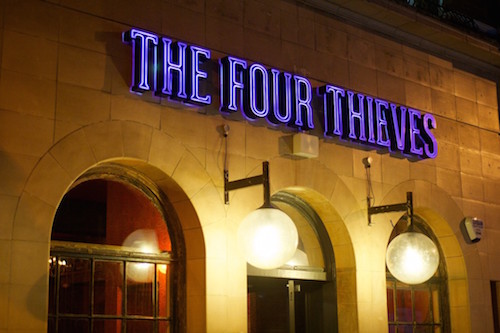 The Laine Pub Company’s latest venue, The Four Thieves, opened its doors in September this year, in Battersea.

The venue is located off Lavender Hill in Battersea in a Victorian music hall which was previously home to the original Jongleurs comedy club.

Four Thieves will brew its own ale and distil its own gin onsite while hosting accessible leftfield entertainment from comedians to alternative cabaret stars and vintage DJs. The venue gains its name from Battersea’s famous crop of lavender which saved the lives of the nefarious Four Thieves in medieval times. 650 years later Battersea’s famous crop is again bringing life to the district.

“At Laine’s we view a great pub as the third place outside the home and workplace that flourishes with a similar emotional, creative and loyal investment. To achieve that our pubs need to be individual, inviting and inspirational and we reckon that with its history, fantastic location and all of the amazing offerings going on inside, The Four Thieves will be all these and more.”

The pub will be made up of a main bar, split over two levels, the Boat House, which will host much of the entertainment, and a gin yard perfect for autumnal evenings complete with a lavender roof, the harvest of which will be used to make the house gin. The space brings the inside outdoors, with heated and covered areas, soft furnishings – and lots of sun in summer. Hidden away is a private dining room that will be able to seat up to 12.

The décor includes weird and wonderful artefacts and furnishings from throughout the pubs history, with elements of Victorian music hall, masonic symbolism, 60s kitsch, which all combine to create an eclectic environment. The pub also gives a nod to the darkness of the Four Thieves legend that saw the Black Death corpse robbers spared their own lives to reveal the secret that made them immune to the plague.

The venue boasts its own onsite brewery which produces up to 40 casks a week; equalling an impressive 1440 pints, meaning there will be a steady flow of craft ale at The Four Thieves. Laine Brewing’s London head brewer, Jim Wilson, uses his highly regarded recipes for IPA, ESB, RPA and Porter – ales that are already loved at The Four Thieves’ sister brew pubs, The People’s Park Tavern and The Aeronaut. In addition The Four Thieves will have its own keg pale ale. Laine’s have also brought its own brewery fresh lager into the venue – a Czech style pilsner that is served straight into the glass from the brewery tanks.

The venue also has its own distillery making Four Thieves Gin and will house around 45 of the world’s best gins and a range of tonics that allowing for roughly 260 different gin and tonic options.

“We are really excited to be able to challenge most people’s perceptions of what a gin and tonic actually tastes like. With so many different gin and tonic combinations we will be able to create a flavour experience tailored to the individual customers taste. Whether you like a big zesty citrus bitter drink, or a soft, savoury and fragrant one, we’ll have something for you.”

The Four Thieves food offer is led by Head chef Hayden Smith who has put together a menu of British pub classics made with seasonal, fresh local sourced ingredients. The menu includes street food, European and pan Asian cuisine with dishes ranging from braised BBQ ribs to ceviche of yellowfin tuna with spiced peppers and pea shoots; from kimchi and pulled pork, to a Laines beer battered haddock and chips.

The new venue also comprises a full week of entertainment, much of it happening in The Boat House room, as well as great drinks and quality food. From the familiar faces of Simon Munnery, Jarred Christmas and Patrick Monahan headlining the Wednesday comedy nights, to the dance classes from Swing Patrol each Monday, the calendar is offbeat, upbeat and accessible.

The entertainment line-up continues through to the live music on Thursdays that takes in gypsy, vintage Americana, Latin ska and much more. On Friday DJs add northern soul and jump blues to those genres, while pop up performers will showcase the best of the alternative cabaret scene.

The perfect pub Sunday manifests itself in a roast with unlimited veg and gravy, and live jazz from key players in London’s 20s jazz scene. A four-piece New Orleans-style hot swing outfit picks up the pace in the evening to round off a lively, cultural week.

Since opening its first pub – Brighton’s influential Mash Tun in 1996 – The Laine Pub Company has an impressive roster of 47 creative, individual pubs, 40 of which are in Brighton, making it the dominant operator in the city. Lately the company has expanded rapidly into London, with sites including The People’s Park Tavern and The Aeronaut, both of which have Laine’s breweries onsite.

The company’s cultural and ecological ethos underpins its commercial objectives, ensuring that its pubs remain relevant and central to the communities in which they operate.

When a fourteenth century king offered to repeal the death sentence placed on four thieves in exchange for the secret that allowed them to rob the graves of wealthy Black Death victims without catching the plague, little did he know that he had discovered the life-saving properties of lavender.

In reality there was no real magic to the oil that the four thieves rubbed all over themselves to stay alive, the lavender contained in the oil is repellent to the fleas whom, unknown to middle ages society, were the carriers of the plague. But the four thieves became famous and their eponymous oil spread in popularity around the world and made lavender equally as famous as a life saver.

The fascinating duality created by the good qualities of lavender and the evil actions of the four thieves are hinted at in the Four Thieves pub located in the heart of what was once London’s lavender fields.

Established in the mid-1970’s, Kensington specialise in providing the complete end to end package for commercial kitchens, catering equipment, air conditioning or refrigeration systems, from design, sales and installation right through to continual servicing to ensure that clients get the most out of the equipment.

The company has a long standing relationship with The Laine Pub Company, covering the entire venue portfolio bridging the gap between Brighton and London.

Four Thieves is the latest venue Kensington has worked on; we caught up with Ellis Mendelson – Managing Director of Kensington – to find out more. He commented:

“Four Thieves is a great example of what we provide; specifying and fitting the new commercial kitchen and extraction systems; designing and building the facility to Laine’s specifications. Alongside this was the heating and cooling for the ground floor; removing the old air conditioning equipment allowed us to install state of the art energy efficient Daikin ceiling mounted cassette units.

“Another service we undertake for Laine’s is providing the brewery control system, and extending to maintaining the brewery once it is up and running. It is very important for us to be involved with Laine’s on this project to maintain the historic relationship we have with the group. They transform all of their sites and create something unique and special.

“My company prides ourselves in our professionalism handling budgets and meeting deadlines at the same time as providing ultimate client satisfaction.”

Barracuda Shopfitting specialise in the refurbishment and refits of pubs and restaurants as well undertaking high end residential projects. The firm has been in operation for 20 years and since its inception has worked all over the country; now the firm focuses on projects mainly in the Brighton area.

Since it began in 1993, Barracuda has established an impressive portfolio of clients working alongside The Laines Pub Company, Indigo Leisure and The Lion Group. Most recently the firm acted as the main contractor during the development of The Four Thieves Pub in Battersea, the latest venture from The Laines Pub Company.

Premier Hospitality caught up with the Director at Barracuda Shopfitting, Jonathan Grant, who is known by all in the industry as Briggs. Briggs commented:

“As the main contractor we carried the Four Thieves project through from conception to completion, supplying all of the tradesmen and materials needed to meet our client’s requirements. The Laine Pub Company are a major client of ours, so we’re happy to support its expansion into the London area and reinforce our longstanding relationship with Peter Bennett. It was also a great opportunity to transform a tired space into an exciting, edgy venue – something we thrive on.

“We pride ourselves on providing clients with a bespoke service, offering high standards of workmanship, even when faced with the tightest of licensing trade deadlines.”