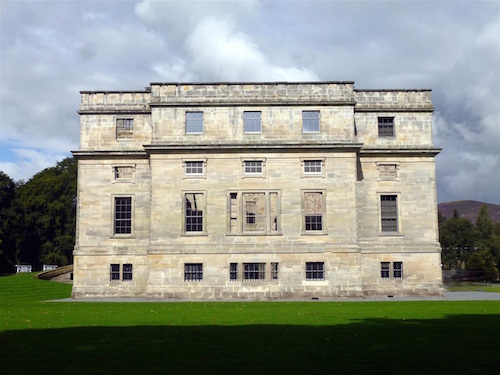 The future of the historic and impressive facade of Penicuik House, badly damaged by fire in 1899, has now been secured following an extensive and complex project to save the structure from imminent collapse, as well as to begin the reinstatement of its famous landscaped gardens.

The project, which is the first phase of a larger scheme in Penicuik, near Edinburgh, is believed to be the first of its kind undertaken on this scale in Scotland.

Penicuik House stands at the heart of one of the country’s most important 18th century designed landscapes, the Penicuik Estate. Built in the 1760s by Sir James Clerk and John Baxter, the house is one of the finest examples of Palladian style buildings in Scotland.

Main Contractors for second half of the first phase works were Graeme Brown, who took over from Hunter Clark after the firm went bankrupt; Architects were Simpson and Brown.

“The object of the scheme was to save the building from imminent collapse through a programme of conservation and stabilisation work, making it accessible to the public.”

He added that the works were carried out for three reasons. The first reason is that the building is architecturally important; secondly it is a major element of Scottish cultural history due to the people who owned it and played a major role in Edinburgh society in the 1770s and 1780s; and thirdly, it is the centrepiece of what is generally agreed to be one of the most significant 18th century designed landscapes in Scotland.

“I believe that this conservation project is the first of its kind to be undertaken on this scale in Scotland” said James Dawney, adding “traditionally grant aid was provided to preserve buildings such as castles and churches, but there has never been a project to conserve and stabilise a great 18th century house like this, so we are breaking new ground.”

Initially, works included the installation of a large crane to remove unstable and dangerous stonework from the top of the building, to make the site safe for people working at ground level within. Other work comprised the removal by hand of approximately 10ft of rubble from the building which collapsed in on itself after the fire. Extensive vegetation was also removed, including 25 ft high trees which have grown amongst the ruins, which has been roofless for 110 years.

The work has included the consolidation of the final four rooms in the house as well as work on the prominent staircases and portico on the north elevation. Significant repairs, which have included the installation of new steel beams, were carried out on the external elevation of the East Bryce Wing and 110 new unglazed sash and case windows have been installed to match the originals. Public access has now been provided throughout the house by installing a wheelchair and pushchair friendly gravel finish. A major element of the scheme involved the use of teams of highly skilled stonemasons. Considerable works were also carried out to reinstate the landscaped gardens.

The project also incorporated both apprentice and adult training programmes in traditional building skills such as the use of lime mortar and stonemasonry.

“Both of the main contractors were very good and Graeme Brown was particularly skilled in the stonemasonry element of the scheme and did an extremely good job” said James Dawnay.

The project is the first phase of a much larger 20 – 25 year scheme geared to restoring the impressive house and its 390 acre landscaped gardens.