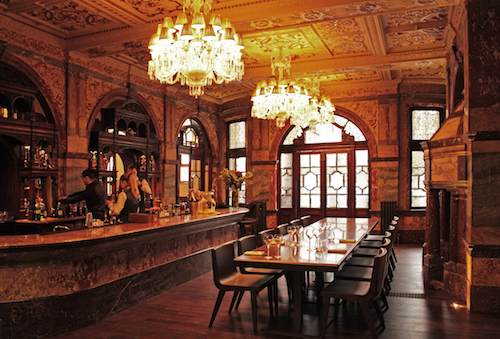 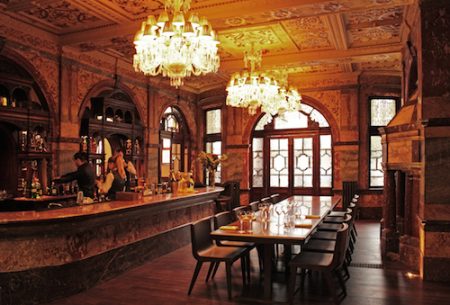 Created through the comprehensive and expert restoration of one of London’s most ornate and beautiful old gin palaces, complete with stunning marble, mahogany and plasterwork interior, Crocker’s Folly Restaurant has recently opened in St John’s Wood.

The building comprises a basement level with four storeys above and the project included the creation of the restaurant on the ground floor, as well as luxury apartments.

The Grade II* Listed building was constructed in 1898 as the palatial Crown Hotel by entrepreneur Frank Crocker who, it was said by some, anticipated serving travelers on the Great Central Railway. Mr Crocker spared no expense on the lavish interior. However the railway terminus was sited at Marylebone rather than St John’s Wood, so the investment was not as promising as anticipated. Nevertheless the pub continued to operate for over a century until closing in 2004. Three years later the Victorian Society put it on their top 10 Buildings at Risk register. 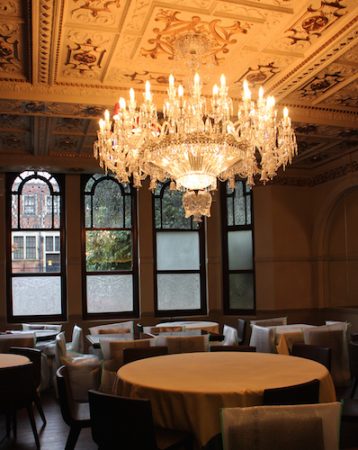 The exterior and the extremely elaborate interior ground floor has been retained and restored – including previously concealed original features discovered during the works. New mechanical and electrical services have been installed including new heating, lighting and ventilation.

The project was carried out for the Maroush Group. Architects were Gegori Chiarotti Architects, with Beatrice Zonta carrying out the detailed design. Main Contractors were BF Construction.

“The building is in an extremely ornate classical style known as Northern Renaissance, with the ground floor public house area featuring lots of different styles, timbers, marbles and plasterwork. Although the upper floors had been extensively altered, the ground floor remained largely intact. Basically the project was a full blown restoration both internally and externally,” architect Nello Gregori told Premier Hospitality.

“Our brief was to provide a really low impact solution for the whole building. Over the years items such as kitchen extract ducts had been installed visibly throughout the building and air conditioning plant was located on the roof. Our scheme involved removing all of this and re-installing everything so that it was no longer visible. For example, we have re-installed all the mechanical plant in the basement and used a small perimeter dwarf wall as a plenum to facilitate air circulation for the heating and air conditioning systems. The planning authority was particularly pleased with this,” said Nello Gregori, adding that throughout the scheme the emphasis was on repair wherever possible, and replacement only where absolutely necessary.

Internally, the building is divided into three rooms on the ground floor, with the main room being in the centre and featuring over 50 kinds of marble, including a huge fireplace, and a stone fronted and topped bar. The back bar features a stone shelf and two carved mahogany bottle racks above. There is also an impressive ornate plasterwork ceiling and a niche to one end of the room now features a new beveled mirror and a wine rack. This room is now an informal dining area. 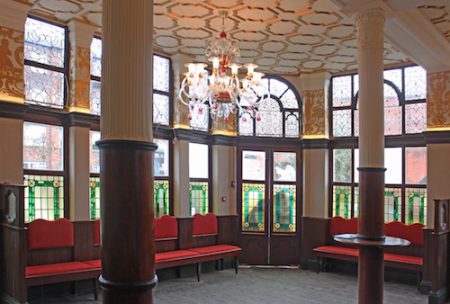 The room to the left is now used as a more formal fine dining restaurant and also features an ornate plasterwork ceiling, with plastered and niched walls and a large fireplace. An original servery with a mahogany backdrop, where diners can now see food being prepared, is situated to one end of the room. The servery was a later addition to the building and replaced a former stage area, but is still listed. Beveled mirrors have been placed in the niched walls and the room has been re-painted.

The room to the right is the restaurant’s bar area and features original mahogany panels dating to different periods and numerous leaded lights. The original large mahogany bar and mirrored mahogany back bar have been retained, as have the banquettes which have been restored.

Large sections of the decorative plasterwork on the ground floor had come away, so this was restored by taking rubber compound moulds to remake the missing sections in fibrous plaster.

New building services, a full catering kitchen, food preparation areas, staff and public toilets and staff changing areas are located within the basement. The basement ceiling height is quite low, with curved and corbelled brickwork features – all of which had to remain unchanged – so this presented a considerable challenge from the point of view of both design and installation. All of the building’s air conditioning plant was re-located within the basement with the air being fed upwards through floor grilles. An additional bricked up vault was discovered in the basement, although it was found to be empty.

“The building had fallen into a degree of dilapidation and some features had been covered up. For example, in the entrance we discovered five false ceilings and when these were removed we discovered original cornicing,” added Nello Gregori.

Externally, restoration work included the cleaning of all the brickwork, the overhaul of all the windows and roof repairs, with 60 per cent of the original slates being re-used. All of the external stonework including around the windows, upper floors and chimney tops was also restored, as were the sash windows, incorporating d curved glass, some of which had to be replicated to replace sections which had been broken over the years.

Other glazing repairs and replacement included those to the many leaded lights – in both stained and plain glass – throughout the building.

All of the remaining three storeys of the building have been converted into four elegant apartments – one of which occupies the full footprint. “Because the building started off as a hotel, converting part of it into self-contained apartments was not straightforward. One of the reasons that we managed to get through the planning stage was that we were able to do this making very few modifications to the existing fabric, so that the new apartments blend naturally with the rest of the building,” said Nello Gregori.

All original building features discovered in these areas were retained and restored. For example, plasterwork was carried out using lath and horsehair plaster and traditional techniques.

The Maroush Group has brought in Head Chef, Arek Bober to oversee the kitchen. Chef Bober previously worked at Pollen Street Social, before which he headed up the kitchen at Portobello Gold and before that Fresh & Wild’s central kitchen. 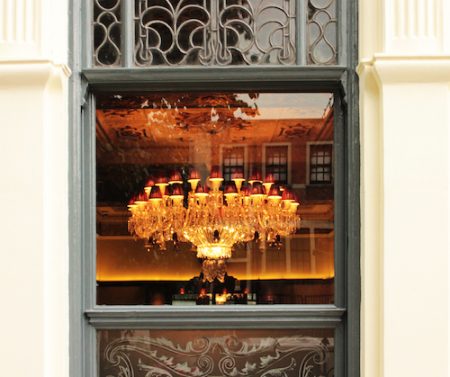 Venice Marble specialise in the supply & manufacture of marble, granite, natural stone and quartz. Established in 1999, the company offers a commercial & residential service and never shies away from offering clients a bespoke service.

Venice Marble has a varied clientele and has working with some of the UK’s most prolific interior designers & architects. The company has worked with many A-list celebrities, lords and ladies – so anonymity is a prerequisite of the job. Projects have ranged from some of the UK’s most luxurious hotels to restaurants and places of interest. The company also work for numerous, equally valuable members of the public. 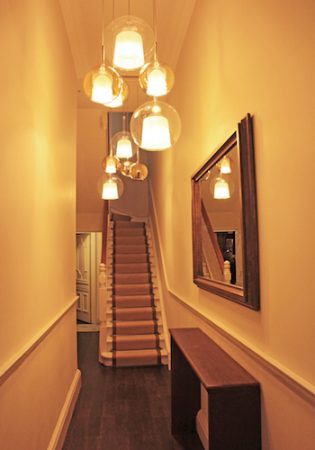 Working on Crocker’s Folly, Venice Marble Ltd worked closely with the design team to provide a bespoke service for the supply & manufacture of the marble, granite & natural stone.

“Attention to detail was imperative to the success of this project as the owner of Crocker’s Folly is well known for his passion for high quality products.”

“We pride ourselves on the quality of our material & workmanship.”