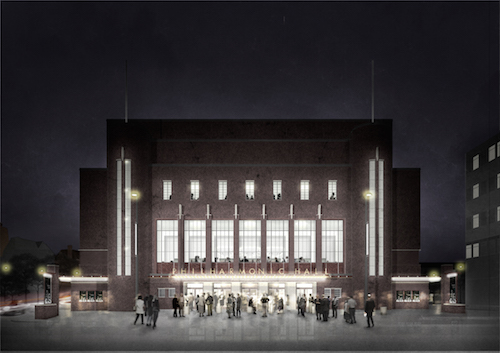 The refurbishment programme is geared to reflecting and complementing the heritage and history of the iconic art deco hall. It will see it evolve to meet contemporary standards and expectations, ensuring that the experience of audiences, musicians, participants and visitors throughout their time in the building, matches the excellence of artistic performance presented there. The scheme is also focused on increasing the venue’s sustainability.

The full programme of works will be completed during 2015, the 175th anniversary of the founding of the Royal Liverpool Philharmonic.

The project to extensively upgrade the building, which was constructed in 1939, is being carried out by main contractors Gilbert Ash, working with architects Caruso St John. Drivers Jonas Deloitte are project managers and Simon Fenton Partnership are quantity surveyors.

The refurbishment will provide significant improvements to front of house areas and facilities for all visitors and participants including the foyer, box office, bars and catering, toilets and lift access to all levels of the building.

The project also involves rebuilding and improving the stage and choir performance areas in the auditorium; the provision of new warm-up, practice and backstage facilities for resident and visiting musicians and artists; and the creation of an exciting new performance space for a range of small-scale concerts, learning events and other activities. The scheme is also geared to ensuring increased environmental sustainability, including the ability to reduce power consumption across the building’s utilities.

Caruso St John has approached the project as three interrelated parts. In the front of house they are lightly restoring the existing sequence of public rooms including discrete interventions that will address functional shortcomings and bring a renewed freshness to the interiors of the Hall.

The auditorium and stage areas required more substantial measures to tackle inadequacies. In these areas stage machinery, house and production lighting and environmental services are being completely replaced within the existing interior architecture. The back stage facilities, offices and second performance space are being most radically changed with the rebuilding of the existing rear extension.

The new-look building should have a festive and unified spirit like the Rowse Building, with the performance space, back of house facilities and offices being brought together to make a single, compact volume. The wide corner window to the bar, the extravagant marquee and the bold posters and signage lend an urban quality to the new venue, projecting the dynamism of the Philharmonic’s programme out to the surrounding city.

Michael Eakin, Chief Executive of Royal Liverpool Philharmonic said: “We are delighted to be working with Gilbert-Ash on the refurbishment of Liverpool Philharmonic Hall. Having seen and admired the work they delivered for our neighbour on Hope Street, the Everyman Theatre, as well as their proven track record in working with other leading theatres and cultural organisations, we are confident that they will realise to the highest quality, the architectural plans developed by Caruso St. John with our design team that will complement and enhance one of Liverpool’s great buildings.

“Caruso St. John has a track record of producing world-class designs which enhance iconic buildings like Liverpool Philharmonic Hall. They share our vision for ensuring that this investment is about building on our successes, matching the artistic excellence of our musicians and the many artists who work with us, respecting our history and ensuring a strong future for both the Royal Liverpool Philharmonic and our home.

“We are excited to be working together with the Royal Liverpool Philharmonic to make their home fit for the 21st century. The original 1939 concert hall is a marvellous example of Art Deco architecture and we are relishing the opportunity to amplify its festive qualities and make it an even more enjoyable place to see a wide range of concerts and events.”

“It was a great pleasure for Gilbert-Ash to return to Hope Street. This is another major project in the cultural sector for Gilbert-Ash, and we look to delivering its successful completion in 2015.”

“Liverpool Philharmonic Hall is a world-famous cultural institution and I am delighted that Arts Council England has backed it with funding.

“The refurbishment will give a new lease of life to this much-loved building, enabling it to be enjoyed by generations to come. I am delighted the city council has been able to support this important project.”

There has been a Philharmonic Hall on the site in Hope Street since 1849. The original, designed by architect John Cunningham, opened in August that and was destroyed by fire in July, 1933.

A new Hall opened in June 1939. It was designed by architect Herbert J. Rowse, whose other buildings in Liverpool include Martin’s Bank, India Buildings and the Queensway Tunnel entrances, toll booths and ventilation building exteriors. The hall’s 1,790 seat Art Deco concert hall also regularly transforms into a cinema.

The hall re-opens in November and the new second space will be completed in Spring 2015, according to the contractors.

Gilbert-Ash’s client portfolio shows an outstanding track record in delivering theatres and arts buildings of the highest quality. Other recently completed landmark projects include Belfast’s Lyric Theatre and Grand Opera House, and a new state of the art archive facility for the British Film Institute in London.

Climax Scaffolding has also been involved in the project. The firm specialise in all aspects of access scaffolding and design services working nationwide in the telecommunications and retail sector. The

firm has been trading since 2001 and pride themselves on the service they deliver which is why they receive so much repeat business.

“It was fantastic to work on the Philharmonic alongside Gilbert Ash as we have worked across the country together on other projects. To work on such a prestigious building in our home town was a great opportunity.”

“It is important for us to be involved in this project as we are from Liverpool and have visited the venue a lot. It is great to be involved with such a prestigious local project.

“We pride ourselves on the quality of our work and craftsmanship.”