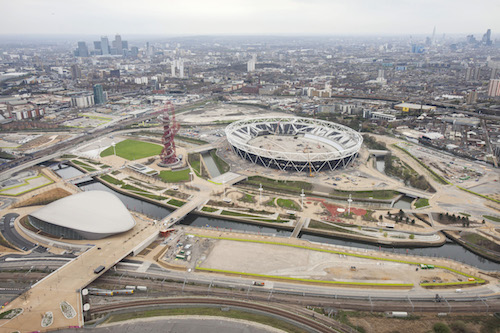 A £70m project is transforming the stadium used for the London 2012 Olympic and Paralympic Games into a multi-use venue to be known as the Queen Elizabeth Olympic Park in Stratford, London.

Works are well underway at the venue, which will become the permanent home of West Ham United Football Club from 2016 and the new national competition stadium for UK Athletics. It will host five matches as part of the Rugby World Cup 2015 as well as the 2017 IAAF World Championships and 2017 IPC World Athletics Championships, the first time these prestigious global events have been staged in the same venue in the same year.

Bam Nuttall Balfour Beatty is carrying out the project, which, when complete will have involved 5,000 people working 2 million man hours.

The peak workforce is expected to reach 500 workers on site with over 30 apprentices also being recruited from the local area.

The new facility will meet UEFA Category 4 classification and will be a fully compliant IAAF Category 1 athletics facility.

The stadium will house a host of facilities including changing rooms, press and media accommodation, general back-of-house areas such as catering and preparation kitchens and storage space, as well as areas that will be converted for educational and community use. There will be 995 toilets, 35 catering outlets and over 90 turnstiles as well as a new club store and ticket office.

The new football pitch will be 105m x 68m which is equivalent to Wembley Stadium, the Emirates, the Etihad and Old Trafford.

There will be 54,000 spectator seats, including 3,600 for corporate hospitality, as well as a range of boxes and lounges. The design includes innovative retractable seating to allow closer pitch side football views while retaining an international class running track.

5,500 tonnes of steel and 6km of cabling are being used in the transformation of the stadium. While building work is taking place, the running track is protected by a 750mm deep mat of recycled concrete which is designed to support all the transformation activities.

A new floodlit 400m 6-lane (8 on the straights) community athletics track is also being built next to the main stadium. This will be used by the local community, local and regional athletics clubs and also as a warm-up track for elite events within the stadium.

Work began on 20 November 2013 to remove the stadium’s 14 floodlight panels, each weighing 34 tons and containing an average 35 lamps, in preparation for a new roof.

Sustainable construction methods are being used in the transformation, including recycling features of the Games-time Stadium into the new design and the re-use of crushed demolition material.

Following the Rugby World Cup 2015, final work will be carried out to prepare the stadium for its long term concessionaires West Ham United FC and UK Athletics.