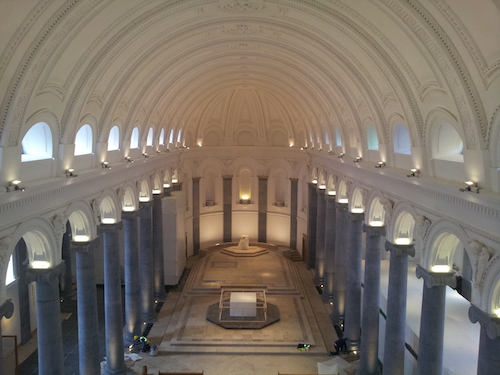 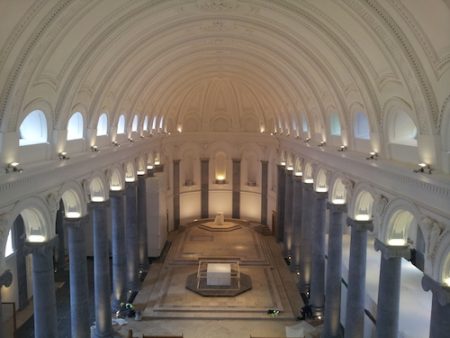 Built during the 19th Century, St Mel’s Cathedral in Longford, is regarded as one of the finest classical-style buildings in Ireland.

The building is a Protected Structure under the Planning & Development Act 2000 and is seen as being a structure of national significance.

At 5:11 am on Christmas morning 2009, the occupant of a neighbouring property detected a fire at the Cathedral; one which had taken hold of the building early that morning. The emergency services were promptly alerted, but despite the deployment of significant resources the fire took many hours to contain and extinguish.

As a result of the fire the building and all its contents suffered extensive fire damage, including the cathedral roof. The only parts of the building not destroyed by the fire were the portico, the bell tower and the main walls of St Mel’s Cathedral.

For the people of Longford and the Diocese of Ardagh and Clonmacnoise the destruction of the cathedral was a great tragedy, one which Bishop Colm O’Reilly described in a letter to the diocese as “a dagger in the heart of the Diocesan family.” However the spirit of the building and its importance to the surrounding community was not lost in that fire and it wasn’t long before a project was implemented to resurrect, restore and revitalise St Mel’s Cathedral. 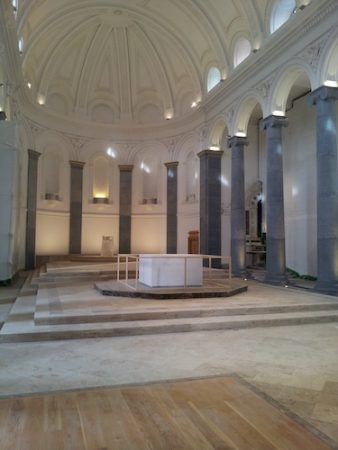 Thanks to a lot of hard work and dedication the building successfully reopened to the public during Christmas 2014. New additions to the cathedral include an Italian made organ and a new altar configuration, but above all else the building has retained its status as an important symbol of the community.

“This is a major building in the middle of Ireland and architecturally speaking, it is one of the most important buildings in the county. St Mel’s has always provided a centre point for the town and is a strong symbol for the people of Longford. Therefore, the restoration work which took place effectively had two aims: to recreate and restore an important Protected Structure and to develop a cathedral for the 21st Century.”

Due to the total loss of multiple building elements during the fire, considerable research was undertaken by the project team before any work could take place. This research provided the team with information about previous alterations and improvements, whilst at the same time showcased the unique character of the building which the team were aiming to recapture. 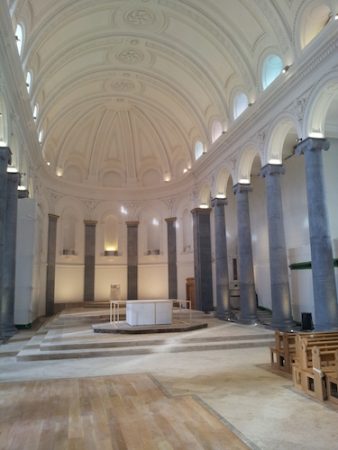 “We had a handful of drawings to work from, which were made during the 1980s as well as a dozen photographs which were taken around the same time. This didn’t give us a great deal to work from, but it helped us piece together the building as best as possible.”

During the restoration the site team retained as much of the original building as possible, however a large amount of stonework was replaced. Two stained glass windows – designed by Harry Clarke Studios – were also retained.

Reflecting on the project, Colm said:

“There are four of us in our team and over the past few years we completely engaged with this project. It was a very positive experience for us and one that we truly valued being a part of.”

St Mel’s is a Roman Catholic cathedral and is the most important religious and historic building in the Catholic Diocese of Ardagh and Cloncmacnoise. The building was commissioned in 1840 by Bishop O’Higgins and included the design work of three eminent ecclesiastical architects of the 19th Century, J.B Keane, John Bourke and George C Ashlin.

Construction work on the cathedral commenced in 1840 but was suspended in 1846 due to the onset of the Great Famine. Work restarted on the project in 1853 and the cathedral was completed and consecrated in 1893. 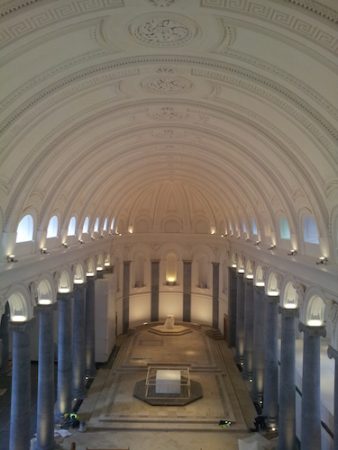 St Mel’s Cathedral officially opened in September 1856, with the building’s campanile constructed between 1860 and 1865, making use of a modified design by architect John Bourke. The portico – designed by architect George Ashlin – was added between 1889 and 1900 and re-ordering was carried out at various stages afterwards, with a major re-ordering taking place in 1977. Further works to the interior and the roof were carried out in the following years, including the replacement of the original slate roof with copper.

The most recent works which took place at St Mel’s Cathedral included the replacement of 28 stone columns and pilasters; repairs to the external stone work; the clean and repair of pediment, tympanum and associated statues; the erection of king and queen post roof structures; and the installation of natural slate and lead ridge roof pieces. Additional work included repairs to the campanile; specialist lime plaster works; the restoration of four marble side altars to the east and west transept; and the fabrication of internal and external doors, amongst other associated works.