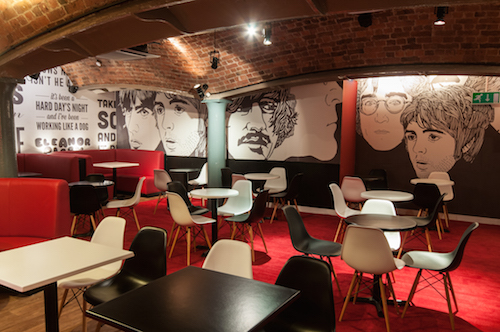 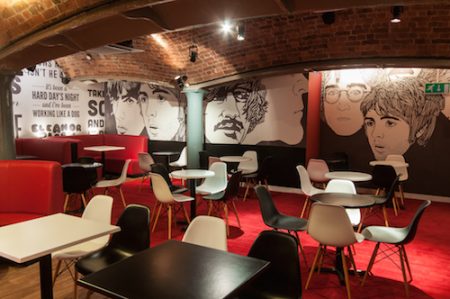 Already proving a huge hit with tourists are two new Fab4 Beatles-themed cafes created for the award-winning Liverpool-based The Beatles Story Ltd, the world’s largest permanent exhibition devoted to the lives and times of the world-famous group.

One of the cafes is located at The Beatles Story base in Albert Dock, whilst the other is at the Pier Head site within the Mersey Ferries terminal.

Mary Chadwick, General Manager (Commercial) at The Beatles Story told Premier Hospitality: “The design took the spaces to a new level. People love the look and feel of it, with many visitors taking photographs.”

The works to create both venues were carried out by main contractors Gateacre Electrical Contractors Ltd. 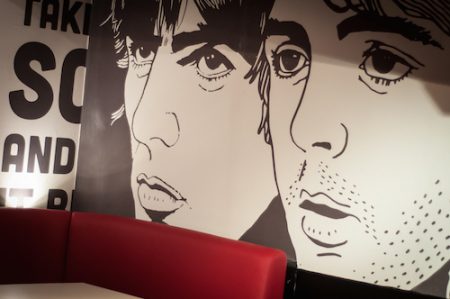 The project to create an 89-cover cafe at Albert Dock involved the refurbishment of a former Starbucks site, which opened in 2008 and had been let out as a franchise by The Beatles Story.

The project involved the complete stripping out and removal of everything associated with the Starbucks brand – including decor, fixtures and fittings and furniture.

“We chose a colour scheme of red, black and white, which is very closely linked to the Beatles’ ‘Revolver’ album. We also commissioned bespoke wallpaper printed with words from Beatles lyrics,” said Mary Chadwick. 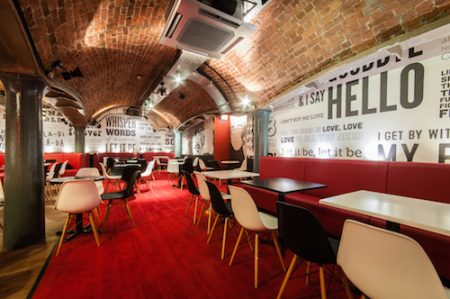 The works also included the installation of new catering equipment to produce the cafe’s food offer which includes jacket potatoes, panini, pizza, ‘scouse’ (a local hotpot) – and even beatles-themed cupcakes!

Overlooking the River Mersey, Albert Dock and the famous Royal Liver Building, the Pier Head venue, which includes a mezzanine floor, was created by re-theming premises formerly occupied by another cafe.

“We were offered the premises following the exit of a previous owner, so we decided to carry out both projects at the same time and design both venues as the same brand. The Pier Head building constructed in 2009 is very different from Albert Dock and is a modern design with large areas of glazing,” said Mary Chadwick. 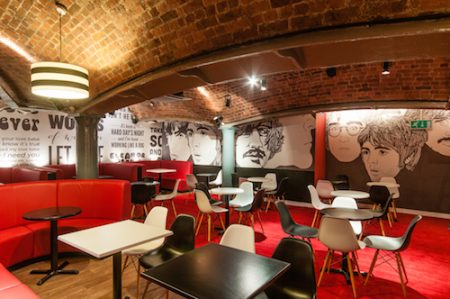 “We have taken the same design as the other cafe and applied key elements of it here – although the counters are in black formica rather than red. We also commissioned two Beatles murals painted by a local artist and have used the same bespoke graphic wallpaper, together with new lighting and images dating back to the Beatles’ time in Hamburg. The views from this cafe are truly amazing and that is a major attraction for customers. We have capitalised on this by upgrading the existing outdoor seating area” said Mary Chadwick. The cafe opened in July last year.

Attractions at The Beatles Story include The Hidden Gallery – a collection of rare photographs documenting The Beatles’ 1963-4 tour, discovered by photographer Paul Berriff in his attic, where they had lain for almost 50 years.

The images show John, Paul, Ringo and George in unguarded moments, rehearsing on stage, smoking in their dressing room and relaxing with drinks and snacks. The photos were taken by Berriff after he was given unlimited access to the band just months before Beatlemania gripped the world. 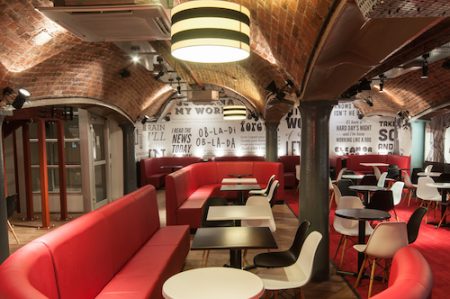 Another attraction is the Fab 4D, in which a whole host of magical characters bring Beatles’ music to life in the Beatles Story’s 4D effects theatre.

Through the use of 3D computer generated animation, audiences are wowed by groundbreaking special effects, which combine with sound and senses to create a spectacular 4D experience.

Fab4D was created using the same cutting edge technology that has propelled hit movies like Monsters Vs. Aliens to cinema screens.