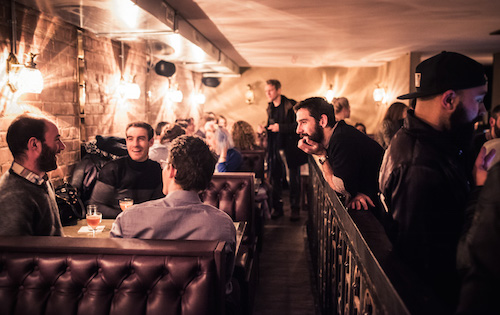 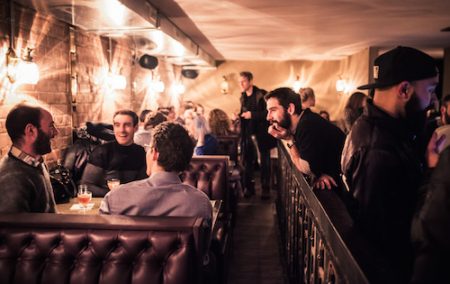 The team behind legendary Hackney cocktail bar, Happiness Forgets (winner of Best Bar in Europe at Cocktails and Spirits 2013, and 6th Best Bar in The World at Drinks International 2013), have just opened their second site, Original Sin, in Stoke Newington.

Run by cocktail specialists Alistair Burgess, Andrew Bird and Darren Jordan, the new venue on Stoke Newington High Street is highly individual with a host of bespoke features and has been designed to be very much a neighbourhood bar, with dim lighting and cosy seating booths.

The project to create the new venue was carried out by J&V Builders, to a design created by architect Hannah Darby in collaboration with Eliska Sapera.

The new basement-level venue was created within a space occupied by another bar, with the original interior being stripped to shell state.

Hannah Darby said: “The brief was to create a sophisticated cocktail bar with a relaxed local feel, with ‘wild west’ saloon-type elements incorporated into the design. A non-branded individual, personal touch was key to the design.” 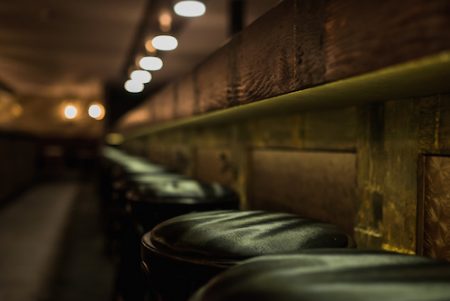 “Rather than just put the bar in the centre of what is a long narrow space, we decided to accentuate this with a very long bar. Due to the shape of the space we had to play around with various elements of the design in order to get the width of the room to work visually and practically,” she said.

“The lighting was another key element and we spent a long time trying to source something vintage and unique. Eventually we settled on crystal 1970’s style ‘pineapple’ lights shipped from New York.”

The venue has a low-lit stairway entrance with two vintage chandeliers and shimmering wallpaper leading into the main area, which features a 10.3m long bar made out of boards reclaimed from 300-year-old Scottish whiskey vats as its centrepiece. These boards are full of character with gorgeous golden tones and a beautiful grain. Behind the bar are three specially designed stainless steel cocktail stations and the back bar area features timber shelving to showcase a candlelit display of spirits. 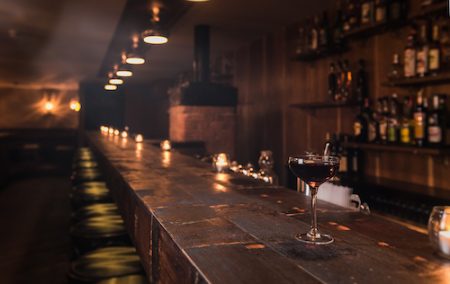 Running adjacent to the bar is a drinks ledge supported by salvaged cast iron staircase decorative spindles. Alongside this is a raised seating area with railway-carriage style four-person upholstered booths. The tables have also been specially designed for the venue. Some have old wooden packing case bases with zinc studded tops and the others have scaffold pipe bases with wired glass tops.

The wall running alongside the booths has been stripped back to the original London stock brickwork (including the removal of layers of paint). At the far end of the room is a handmade pool table with elaborately carved legs, located within a wooden cladded area of its own. The pool table area is illuminated by a large chandelier which was rescued from a bankrupt casino (how satisfyingly ironic!).

Wooden flooring has been laid in the seating area, with the remainder of the floor being in polished screeded concrete.

The project also included the complete re-wiring and installation of air conditioning and fresh air ventilation, as well as drainage. 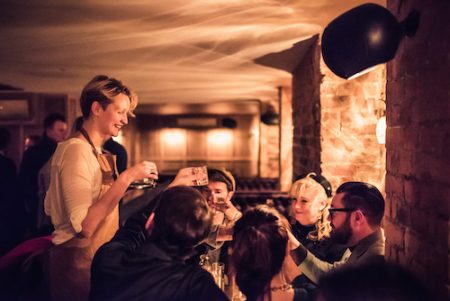 “J&V Builders quality of work was superb and we could never have opened before Christmas if they hadn’t worked so hard,” added Hannah Darby.

The bar opened in November 2014 and has had excellent press coverage including good reviews in the London Evening Standard and Time Out.