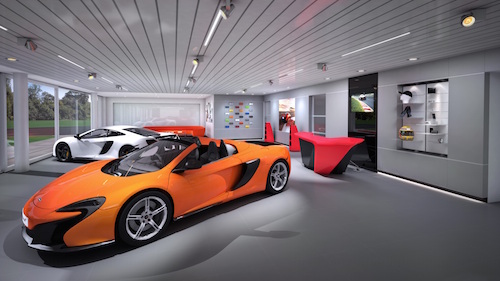 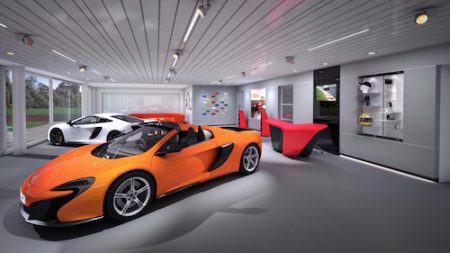 A prestigious new state of the art facility – the largest McLaren showroom in the UK – is nearing completion in a project at Station Hill, Royal Ascot, Berkshire.

The showroom will feature new models including the latest 650S Coupe and the 650S Spider, as well as the largest selection of McLaren Qualified pre-owned cars in the world.

The project is being carried out for the Jardine Motors Group, with Principle Contracts Ltd as main contractors and Axis3 Design Ltd as architects.

The new building is located only a short distance from the McLaren Technology Centre (MTC) headquarters in Surrey, adjacent to the mainline rail link in the town.

The site was previously occupied by a Honda dealership, also owned by Jardine Motors Group and the old building was redeveloped as part of the current contract.

The new building, which is mostly single storey with a small mezzanine element for the parts department, will incorporate an eight car showroom, three workshop bays, a wheel alignment bay, car valeting facilities and a customer lounge. Externally there will be space for 17 used cars, as well as a customer car park, with landscaping around the periphery of the site. 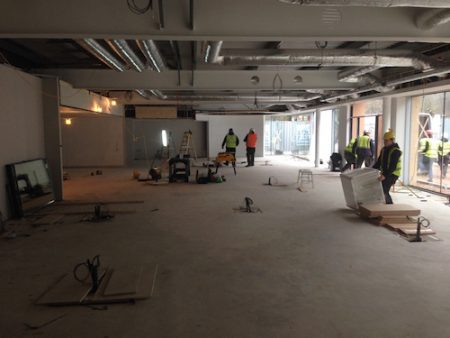 The interior design is in line with the very specific corporate identity of McLaren, featuring grey ceramic tiled floors, with the lighting scheme and wall units in McLaren corporate style.

The steel framed building features a number of different elevational treatments, including traditional cladding and render, with glazing to the front of the building, and a flat roof

Stephen Pettyfer, Property Director of the Jardine Motor Group said: “For the first time the new showroom will allow us to have not only the new and pre-owned car sales but also after-sales provision and service on one site, whereas we were previously operating these functions from two different locations.

“This was a difficult site both in terms of ground contamination and the foundation solution for the building – coupled with the site being relatively small and constrained with restricted space in which to work. In view of this I would say that the contractors have done a reasonable job.” 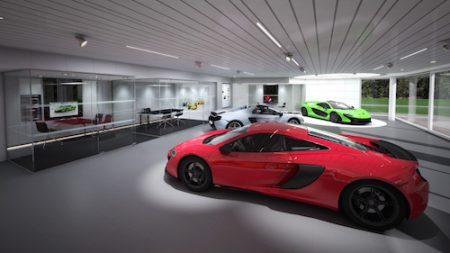 David Brimson, European Director for McLaren Automotive said: “The UK market is key to the growth of the McLaren brand as we continue to strengthen the network, and this is shown by confirmation of McLaren Ascot. Jardine Motors Group has proved a valuable retail partner in establishing the brand over the past three years, and McLaren Ascot will provide an important second hub for the brand in the south of England.”

Mark Herbert, CEO of Jardine Motors Group added: “It is amazing to think McLaren Automotive only launched three years ago, and the journey the company has been on since then, with the 12C, the McLaren P1™and now with the 650S. It is a really exciting time to be involved with the brand, and there are some really great products in the pipeline. The addition of McLaren Ascot will be another jewel in the company’s retail network, complementing McLaren London at One Hyde Park to fully service the needs of customers in the south east of England.”

Established over 40 years Jardine Motors Group, trading as Lancaster has grown to become one of the largest motor retail groups in the UK. Today it represents 23 manufactures including some of the world’s most prestigious and desirable motoring brands in over 70 locations across they UK. A strategy of focusing on premium, luxury and supercar secures of the market is reflected in the design and standards of its retail centres.

Electrical and energy-saving solution specialists, Fusion work on retail, commercial and industrial projects throughout the UK. Working on the McLaren project the company is responsible for the full electrical design and build of McLaren’s state-of-the-art showroom. Work includes the installation of power, as well as distribution and containment throughout the showroom.

“This is a wonderful opportunity to contribute to a prestigious project for a high profile client and to challenge ourselves not only to meet, but to exceed expectations, certainly in terms of sleek, minimalist design. This caliber of car showroom needed an open, light environment to fully appreciate the superb McLaren range, from the magnificent 12C to the beautiful 650S.”