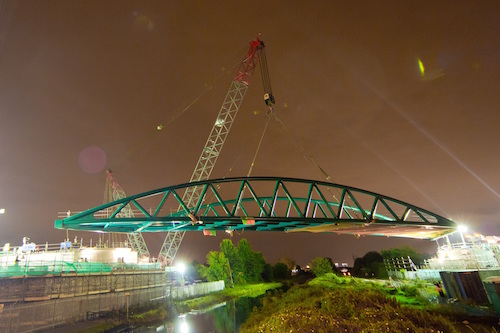 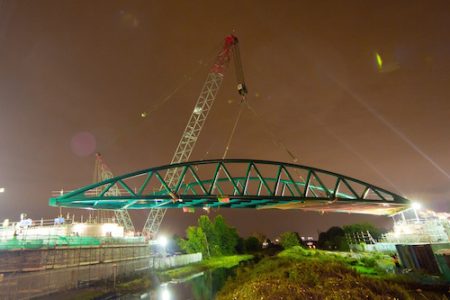 One of the busiest manually operated rail level crossings on the Iarnród Éireann network at Reilly’s Crossing on the Ratoath Road, Dublin has been replaced with a bridge, benefiting rail customers, road users and pedestrians alike.

The project links the Ratoath Road from a point approximately 300 metres south of an original level crossing (now closed), to the Ballyboggan Road junction to the north.

The new bridge will, in tandem with other planned projects, allow for future increased capacity on the busy Maynooth to Dublin rail line for train services.

It has immediately eliminated major road congestion at the crossing, with 107 trains passing through the level crossing each day, including up to 55 services at peak times causing constant traffic queues while the gates are closed.  These vehicles now use a modern bridge over the rail line with capacity for all users in the area.

Work started on the new bridge crossing the railway and the canal in June 2013 and has been completed to schedule. Works included the construction of 500 metres of road, a bridge over the railway and canal and a junction with the Ballyboggan Road.

The €9.8 million project was developed in co-operation with Dublin City Council and funded by the National Transport Authority.

Iarnród Éireann appointed BAM Civil Ltd. as contractors for the scheme which was supervised by Roughan & O Donovan Consulting Engineers.

The single span steel truss bridge span is 70m with a width of 15.4m to the outside of the steelwork structure, which was manufactured by Horta Coslada in Madrid. 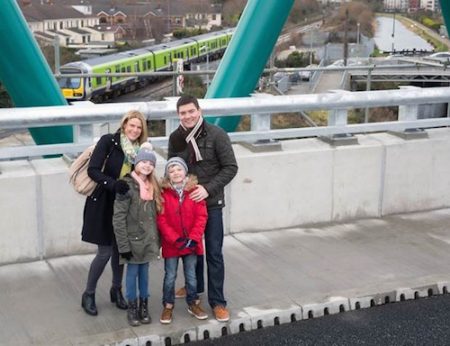 The weight of the overall bridge is approximately 1620 tonnes including structural steel, structural concrete, pavement, parapets and finishes.  The crane used to lift the bridge was transported by sea from the UK.

Other elements of the €9.8 million scheme included the creation of traffic, cycle and pedestrian facilities along the 500m of realigned road; the construction of a tie-in to the existing Ratoath Road at Marian School, 240m south of the level crossing, and the construction of a landscaped embankment on the southern approach to the bridge, on the grassed area to the east of the existing road.

Additional works comprised the formation of a reinforced earth walled embankment along the open land between the existing commercial units to the north of the bridge; the provision of pedestrian ramped access to the canal from the north west side of the bridge, and the creation of a revised signalised arrangement of the Ballyboggan Road junction.

The new bridge will greatly help with the traffic flow on the Ratoath Road which provides a very widely used north-south connection from the North Inner City and Cabra to Finglas.

Increased traffic and pedestrian safety, together with the reduction in traffic congestion in the area will enable improved accessibility and linkages at peak and off peak times for work, shopping and leisure purposes.  The road will also provide a much needed improvement to pedestrian and cycle facilities along this section of the Ratoath Road.