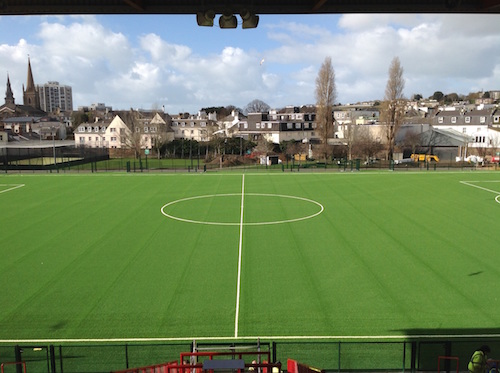 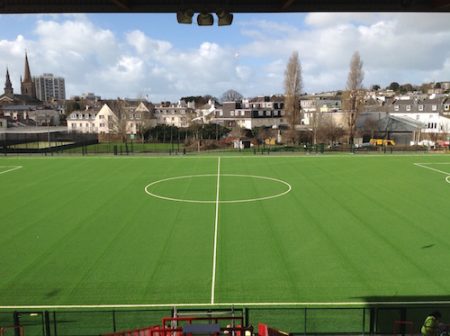 Hailed as “probably the most exciting development in local soccer ever” by Jersey Football Association’s Bob Lawrence, a new high-tech synthetic football pitch has just been laid at the island’s Springfield Stadium, which will significantly increase the amount of sport played there.

Known as 3G pitch technology, the new £700,000 synthetic turf pitch, which was part-funded by a grant from the Football Association, has been laid in time for this summer’s Island Games, which Jersey is hosting. The pitch will also host Jersey FA league matches, coaching and training and is open to schools, clubs and community groups.

The project was carried out for The States of Jersey.

Previously Springfield hosted around 50 football matches each year (around 100 hours of play). When played on, the grass got damaged and the surface needed time to recover between matches.

The new synthetic turf is far more resilient, less susceptible to adverse weather and is constantly available for play, so can be used for more than 2,500 hours each year. 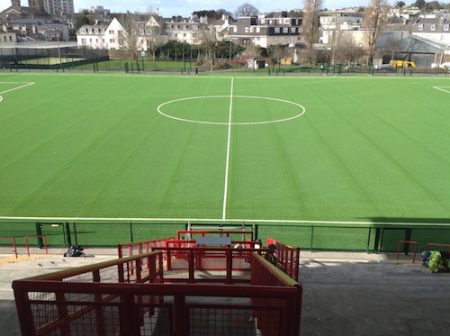 Mark Pashley of Pitch and Track Ltd, project consultant for the scheme to lay the new pitch, explained the complexities of achieving the right surface:

“The state of the art surface has been constructed to FIFA One and Two Star levels, which means that it can be used for international matches.

“The project involved initially excavating out all the topsoil and re-grading the existing sand and gravel base layers using a laser controlled bulldozer. The pitch originally had a ‘hog’s back’ design, meaning that it was raised in the middle. We re-graded it to produce a uniform surface with a 1 per cent gradient.

“The drainage was then checked and a new geo-textile layer was installed, followed by a new layer of Type 3 stone, which was levelled in even layers of 150mm using a laser controlled bulldozer. The stone was then rolled and compacted to 95 per cent of its dry density, before a final 50mm layer of finer stone was laid on top to tolerances of plus or minus 10mm to the design level. This then had a 3m straight edge pulled along it to test for any deviations over 3m and any gap greater than 10mm was adjusted.

“A 20mm shock pad was laid on top of the stone and this was then tested to ensure that there was no deviation of more than 6mm under the 3m straight edge. The final 3G carpet was then laid. This carpet incorporates 240 tonnes of sand in the bottom layer and 80 tonnes of rubber granules in the top. 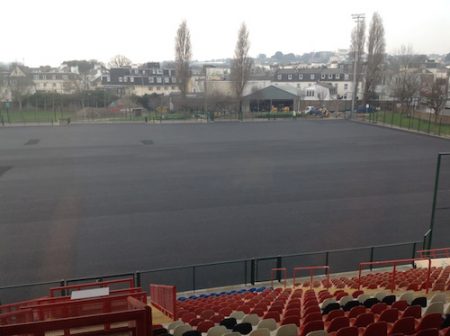 “The base layer is the most important thing to consider in carrying out these works. If you start with a very flat and uniform base layer, then you can bring it up in consistent, even layers.”

Further works included the erection of new kerbs and fencing around the pitch periphery, the refurbishment of the floodlighting and the installation of new goal posts and flags on the pitch.

In addition, the stadium’s car park was rebuilt and a new safety surfaced children’s play area, complete with equipment was created.

Finally, the whole of the site was re-landscaped, including the planting of additional trees.

“We used all local contractors on the project, which went well and came in on budget,” said Mark Pashley.

Colin Stanier of Jersey ESC – Sport & Leisure Division said: “This project has lots of benefits for the Island Games and the community. 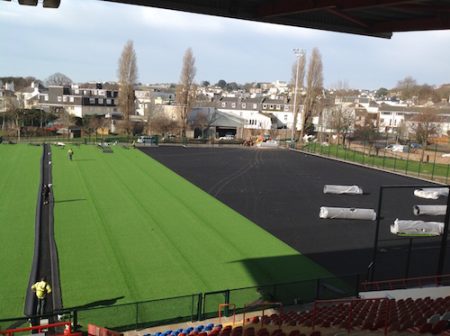 “ESC worked with the Planning Department to make sure various concerns of local residents and all the conditions of the planning application panel were met – including no loss of green space.

“Jersey also had to comply with a framework of requirements of the Jersey Football Association in order to secure their funding for the project, on a 50/50 basis including recognised suppliers of the 3G carpet.”