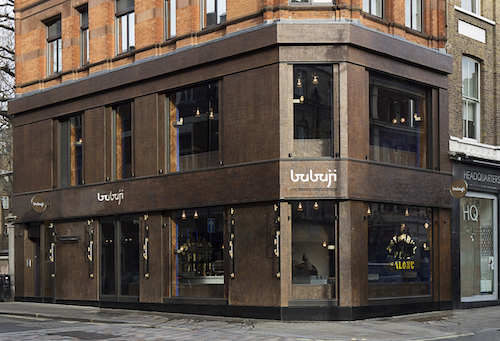 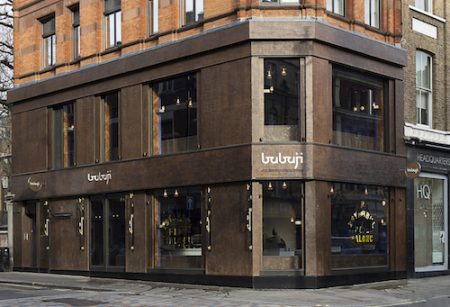 The Babaji brand, the brainchild of restaurateur Alan Yau, has recently opened their latest venue in London’s bustling district of Soho.

Babaji specialise in traditional Turkish cuisine offering diners an exciting new dining experience in the heart of the capital.

Babaji spans four levels with a large dining area on the ground floor, a larger restaurant area on the first floor and a kitchen and small dining space in the basement.

Misia&Crater Shopfittings acted as the main contractor on the scheme working alongside Archer Humphryes Architects and interior designers Autoban. The team have created a space which transports diners into contemporary Turkey boasting an array of authentic design features.

Premier Hospitality caught up with David Archer, Director of Archer Humphryes Architects, to find out more about the project which is located on the corner of Wardour Street on Shaftesbury Avenue. David commented:
“We were the lead architects for this project, developed by Alan Yau and Aaya, as we have worked with Alan for 15 years. Our involvement in the scheme has seen us work closely with Alan, his team and the design team Autoban. 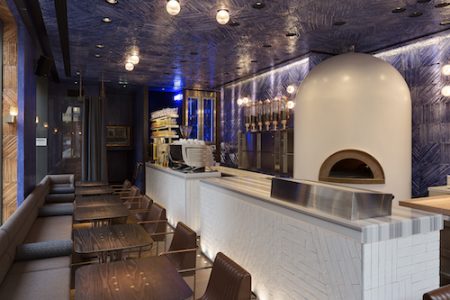 “Our tasks involved developing the brief, as well as overseeing and managing the planning application and planning work with the council. We also developed the special layout with Alan which has involved the removal of the entire four floors across the whole building.”

The team have also implemented an innovative façade on the front of the structure complete with large picture windows and classic framed views facing into china town. The texture of the restaurants façade has been achieved by plastering and painting over a metal structure to create a weathered surface. The blue tiles that dominate the interior of the restaurant can be seen from outside drawing diners inside.

Babaji has also been decorated with contemporary Ottomon ceramics on the floors and ceilings lined which have been made especially for the venue.

Designers Autoban have sourced and created bespoke vivid blue ceramic tiles which act as a main feature throughout the space. The tiles contain patterns inspired by the veins of Marmara marble. The venue also contains traditional Turkish Iznik tiles, handmade by craftsmen in Istanbul, which have been incorporated into the tiled surface. The same Iznik pattern features on some of the venue’s soft furnishings. 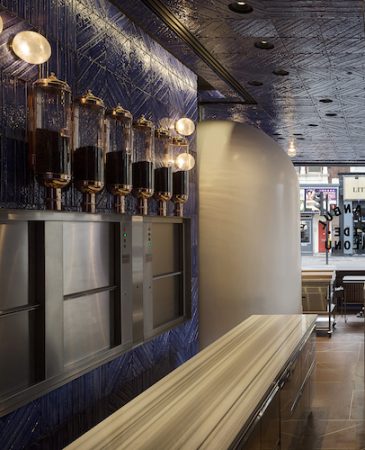 The furniture has also been bespokely designed by Autoban and comprises a mixture of banquette seating, as well as smaller seating areas for groups of two, three and four. The smaller tables are located around the perimeter of the venue and so offer diners impressive views.

Most of the furniture in the venue has been designed exclusively; however some additional existing signature pieces from Autoban’s studio have been used. The furniture is simplistic in its design but also combines a richness and attention to detail in each piece, such as the inlaid brass detailing in the wood banquette seating and tabletops.

Feature brass inlays are a nod to traditional Turkish culture and so, with this in mind, Autoban has applied a contemporary dotted design to the Babaji pieces. These inlaid brass patterns have been placed on the back of the banquettes, making the design feature visible from the outside of the restaurant. 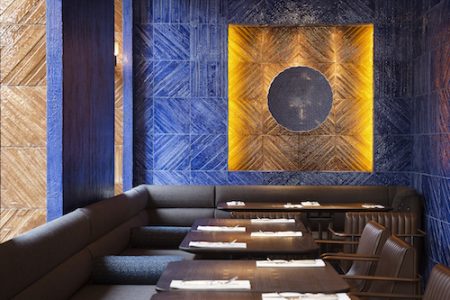 The restaurant on the ground floor features a large stone Pide oven located in a very prominent position. The oven allows diners to see pizzas being freshly baked and provides a great deal of ambience in the dining area. The oven is an innovative interpretation of traditional Turkish Pide ovens with a cylinder form, where the hood is hidden underneath the dome. The rest of the ground floor is designed around this all-white oven, which pops out from its blue ceramic tiled background.

“As architects it is really interesting for us to be involved in this type of conceptual work. This is a unique and unusual restaurant in both its conception and operation. We love to work on projects like this where we revisit, rethink and interrogate the nature of socialising and people’s behaviour in hospitality environments.”