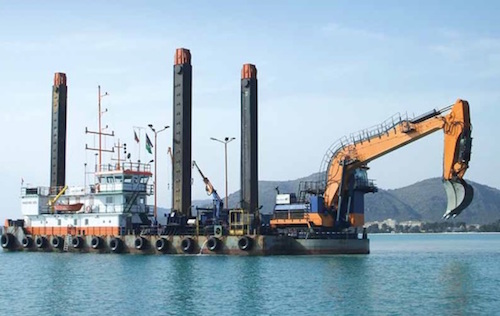 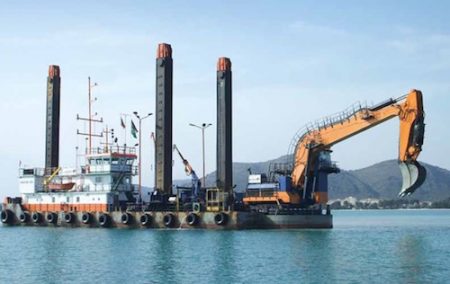 The Public Services Department, through its business unit Guernsey Water, will be replacing the sewage disposal outfalls that extend from its Belle Greve site on the east of the Island out to sea.

The project will run from March to October 2015 and will cost just under £20m. The main contractor is Van Oord UK Ltd, a company who has extensive experience in marine engineering solutions. Van Oord in turn has sub-contracted local civil engineering company Geomarine to carry out the land-based work for the project.

The project is not only a significant one for Guernsey in terms of importance and scope, but will also utilise techniques that most Islanders will probably not have seen before. These will include marine dredging from a ship-borne backhoe excavator, and the floating of large lengths of new outfall pipe before a controlled sink to the seabed. 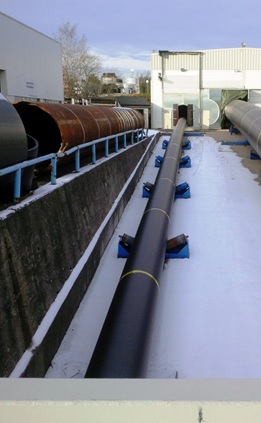 The Island currently has two sea outfalls through which to discharge wastewater which first passes through Belle Greve Wastewater Centre (BGWwC). The main outfall is known as the Long Sea Outfall (LSO) and currently extends about a mile out into the Little Russel (which is the receiving water for the discharge). The second outfall is known as the Short Sea Outfall (SSO) and is only used during storm events when the LSO cannot deal with all of the flow. The SSO extends about 400m out to sea to just beyond the low water tide mark.

The outfalls have been in place for a number of years; the LSO is approximately 45 years old and the SSO much older at over 100 years. A study carried out in 2011 showed that they are in a significant state of disrepair and at risk of failure. This survey work estimated that the LSO had up to 10 years life remaining, and that the SSO was in an even worse condition. Therefore the decision to replace them is an essential one, and something that has to be precipitated as quickly as possible in order to remove the unacceptable risk of catastrophic failure.

There is a substantial amount of background to this project, as the Island had been debating the best way to deal with its wastewater discharge in a safe and sustainable way for some time, and a number of reports have gone before the States Assembly to that end. The main debate was around whether biological sewage treatment was needed to meet the environmental standards regarding impact on bathing water and shellfish quality, or whether a combination of preliminary treatment and the natural processes of the receiving waters would be sufficient. 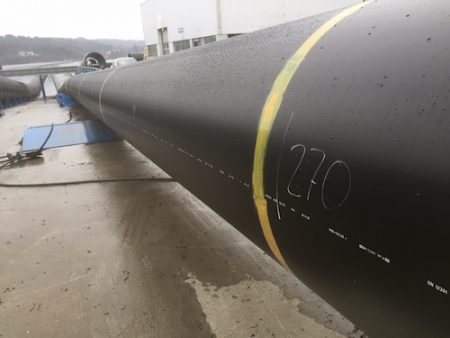 To provide an evidence base to inform States’ debates, global marine experts Intertek Metoc (now known as ‘Intertek’) were contracted to model the receiving waters of the Little Russel, and to assess what impact the wastewater discharge had on bathing water quality, both locally and in other bays around the Island.

After the detailed study, the results showed that due to the unique tidal range and movement of the Little Russel, the receiving waters had a high capacity for dilution and hence the natural breakdown of biodegradable sewage. However, the sea could obviously not deal with the non-biodegradable items and these needed to be removed from the flow. In addition, it was determined that the volume and frequency of overflows through the SSO during heavy rainfall needed to be reduced.

In order to solve these two issues, the BGWwC was built to provide preliminary sewage treatment in the form of mechanical screening and grit removal, and a 4 million-litre capacity storm storage tank. This investment has already made a visible difference to the littering that used to occur on the Belle Greve foreshore, and has reduced the need to utilise the SSO during storm events to a handful of incidents each year. The next necessary step is to replace the sea outfalls in order to safely and efficiently discharge the wastewater to the receiving waters. 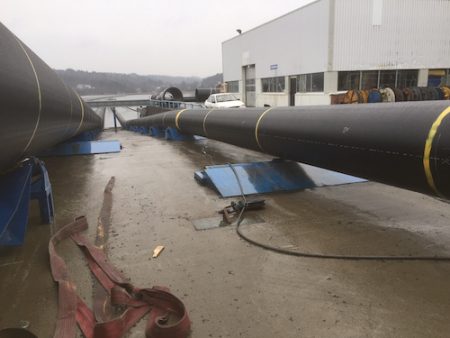 The main contract was officially signed in mid-February and work will soon begin in earnest. The first part of the project will involve installing the new pipes from the BGWwC across Les Banques coast road, to the point where a new chamber will be built. This chamber will act as the link between the marine outfalls and the BGWwC, and will protect the BGWwC and surrounding land from flooding during extreme high tide conditions.

These land-based pipes will be constructed using ductile iron of 700 and 900 mm diameter for the LSO and SSO respectively, and will take approximately three months to install (from June to early September). There will be a need to make Les Banques a single-lane traffic arrangement for up to 3 weeks to facilitate crossing the road to the chamber towards the end of this period. The chamber will be constructed straight after this, and should take four months. 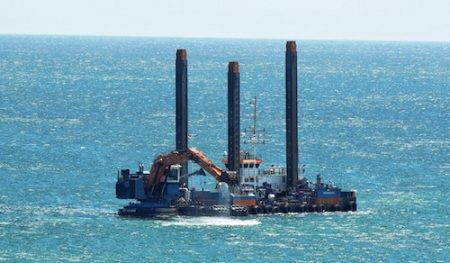 The marine work will be carried out simultaneously. The high density polyethylene (HDPE) pipes will be manufactured by Pipelife Norge AS and will be towed to Guernsey from Norway in nine long lengths; eight at 480m long, and one at 300m. Once moored off the east coast of Guernsey, the pipes will be prepared by fitting concrete collars along each length; the total weight of concrete on both pipes is estimated to be 3,115 tonnes. While the collar fitting is being undertaken, the trench for the pipes will be excavated using the barge-mounted backhoe dredger, the ‘Razenda Bol’, starting in June. Each pipe string will then be towed from its temporary mooring position to above its final position, before being sunk to the sea bed during a controlled operation. Once the pipes have been confirmed as being in the correct position, the trench will be backfilled with the excavated material. The existing SSO will be removed from the seabed and disposed of, while the existing LSO will be sealed and left in place.

The project as a whole is expected to be completed by the end of October. During the project we will be liaising closely with key stakeholders, particularly those residents and businesses most affected by the works. We will keep groups up-to-date through a combination of letter-drops, drop-in sessions with project managers, electronic communications and media work.