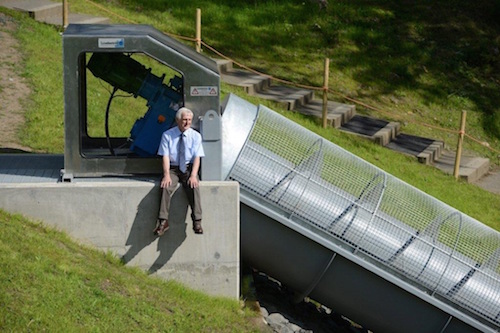 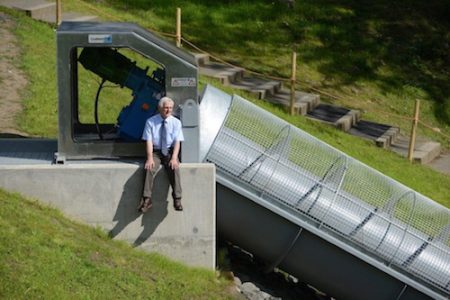 Securing a coveted place in the tourism and leisure category of the RICS North East Renaissance Awards shortlist, is the Cragside Archimedes Hydropower project in Morpeth – restoring hydropower to one of the UK’s grand houses, which almost 140 years ago pioneered the use of water to provide electricity.

The project was carried out for the National Trust, who are also the main contractors for the scheme.

A modern version of an ancient device, the Archimedes screw, was installed at Cragside mansion to harness the power of a stream in the grounds and provide lighting for the house – which in 1878 became the first in the world to be lit by hydroelectricity, provided by a turbine.

The new system, a galvanised turbine 17 metres long, produces enough energy to light the 350 bulbs in Cragside, although not enough to power its computers, freezers, fridges and heaters. It generates about 12kw of electricity − enough, over a year, to provide the property with around 10% of its electricity.

Cragside was built by the 19th-century inventor and innovator, Lord Armstrong, who used the lakes on his land to generate hydroelectricity.

Andrew Sawyer, property curator at Cragside commented: “It is a very visual demonstration of the way hydro power works, an almost sculptural sight in the landscape. Lord Armstrong was an exceptional man with an ingenious mind and bringing his vision for Cragside into the 21st century is a dream come true. Hydroelectricity is the world’s most widely used form of renewable energy, so we are now sharing this very special part of its heritage.” 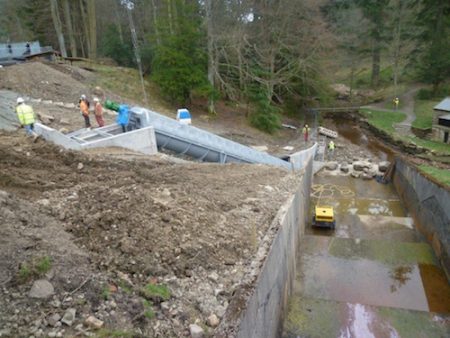 Water from Tumbleton lake, the lowest of the five lakes on the Cragside estate, feeds through the turbine and into the burn below. As water passes through the spiral blades it causes the screw to turn, thereby harnessing the energy of falling water. The energy is then converted into electricity using a generator. The technology is well proven with over 100 installations in Europe and was chosen by the National Trust for its many advantageous features.

Sarah Pemberton, head of conservation at the National Trust said: “The technology is easy to maintain due to the simple mechanics, and because it works at low speed, it’s possible for fish to pass through the turbine unharmed. The best thing about the screw is that it’s visible and we hope this will add to people’s understanding of why Cragside is so special.

“What is really important to us about this project is that it has enables us to retell the story of hydropower at Cragside, which adds authenticity to the story we tell about Cragside being the first house to be lit by hydroelectricity and to realise Armstrong’s dream for the site, whilst using modern technology.

“We were really pleased to get a nomination and are very proud of the project. We think it adds a whole new dimension to the estate for visitors and we purposely designed the project to be highly visible in the landscape, so that visitors can see it as soon as they arrive.

“To be nominated in the tourism category reflects our ethos for the scheme in that it wasn’t just about using renewable energy, but also about telling visitors the Cragside story. The day the screw arrived we had several hundred people watching it being put into place, which shows how intrigued people are by this technology.” 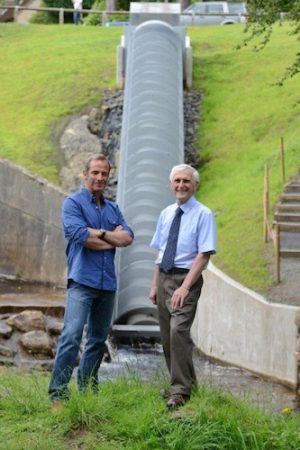 Mann Power Consulting Ltd (MPCL) are Archimedean Screw hydropower specialists, having brought the technology into the UK for the first time in 2004. The firm designed and installed a scheme at Cragside House, near Rothbury, taking hydroelectricity back to its 19th-century birthplace.

Cragside was the first place in the world to be lit by hydroelectricity and the Archimedean screw generator is now providing all the energy necessary to light the house once again. MPCL‘s 21st -century scheme was officially opened in 2014 by Robson Green as part of his ITV series Tales from Northumberland.

Cragside House was originally seen as a wonder of the late Victorian age, when then owner Lord Armstrong developed a system of turning the power of water into electricity. He first used it to power arc lamps for the house in 1878, then in 1880, installed his friend Joseph Swan’s newly invented incandescent light bulbs. A bright, clean form of lighting was introduced into domestic use, making Cragside the first house in the world to be lit by hydroelectricity.

The MPCL scheme uses a 17-metre long Archimedean Screw that can produce up to 10kW – enough to power all the lighting at Cragside House. This scheme demonstrates the capability of Archimedean screws to generate on 8.3m of head. Although the original hydro plant took its water from Nelly’s Moss Lakes some 104m above the power house, the intake for this modern day low-head turbine comes from Tumbleton Lake much closer to the house. This arrangement has also created a dramatic educational feature for the 200,000 visitors to the property each year.

“We feel privileged to be working for the National Trust at Cragside House, which is where it all began back in the late 1800s, and are delighted to have been part of bringing Armstrong’s vision back into the 21st century.”