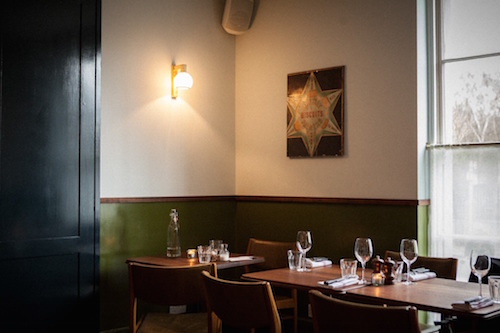 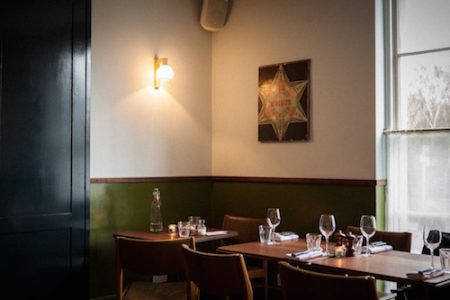 The latest offering from two highly successful restaurateurs – and already winning impressive reviews from diners – a brand new 100-cover Foxlow neighbourhood restaurant and bar – the second to be rolled out – has just opened in Church Street, Stoke Newington.

The project was carried out for Underdog Restaurants, which operates the London-based Hawksmoor brand and is headed by Will Beckett and Huw Gott, who together launched the first Foxlow ‘neighbourhood restaurant’ concept in 2013, with an opening in Clerkenwell.

Architects for the project were Macaulay Sinclair, with Stebar Interiors as main contractors and Technical Services and Current Affairs as mechanical and electrical consultants.

Located in premises previously occupied by the Homa restaurant which closed down, the new Foxlow occupies both the ground and lower ground floors of the building, as well as having a front terrace. The restaurant has a gross internal area of approx. 280m2, with the terrace occupying a further 40m2. 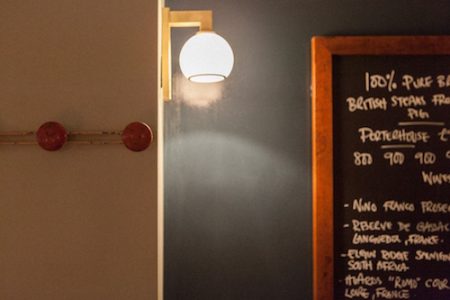 Nina Tigonen of Macaulay Sinclair told Premier Hospitality: “As the space had previously been occupied by another restaurant, we did not need to change the existing shell too much, although we did strip out much of the original interior whilst still retaining some of the existing features. We wanted to add more character and warmth and create a ‘neighbourhood’ feel to the venue – as though it had been there for a longer time. We wanted to make the restaurant feel as though it is a part of the community and create a welcoming ambience for customers.”

Externally, the building has been repainted and new signage added.

Upstairs, the decor is loosely based on 1950s tones with dark green shades combined with reclaimed Iroko timber wall panelling to dado height and a light blue painted finish above. Much of the loose furniture is reclaimed and was sourced for Holland and newly upholstered with olive green leather, with the table tops also being in Iroko timber. The bespoke fixed banquette seating booths around the perimeter have seating upholstered in a darker green leather.

The original bar was also replaced with a new one featuring a frontage clad with a recycled 1940s room divider screen to add character in keeping with the overall design. The bar top in is Carrera marble. New timber shelving with a brass supporting structure has been suspended over the bar, with the back bar shelving being in Iroko timber. The original timber flooring was retained and re-stained. 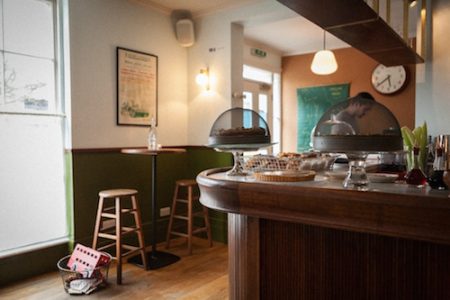 Downstairs, an additional space has been created as a cosy venue particularly suited to evenings, with darker tones including dark blue, being used on the walls.

“The downstairs space is darker and so lent itself more to evenings, whilst the upstairs is lighter and ideal for daytime dining,” said Nina Tigonen.

The kitchen, which is located downstairs, was re-designed and re-fitted as the original kitchen was not suitable for the new restaurant. The original timber floor had been painted black, and this was stripped and re-stained, to highlight its natural oak colour.

New pendant lighting and wall lights have also been added, replacement reclaimed 1950s cinema doors have been fitted throughout and a new vestibule has been constructed downstairs.

The toilets were also re-decorated and new mirrors were fitted.

External works included re-decoration and the addition of new signage. 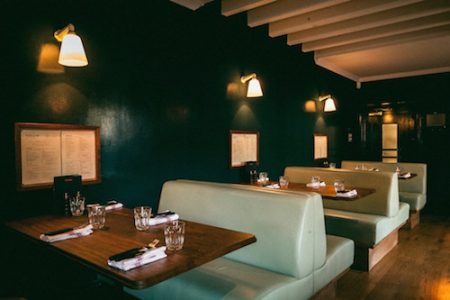 The kitchen was supplied by Sprint Refrigerators, and the reclaimed loose furniture was from Dutch; pendant lighting was by Drew Pritchard and the wall lights are by Lumart. Atomic Furniture supplied the table bases and the bespoke fixed seating was made by Craftwood.

“Everyone did a brilliant job on the project and there were no major issues. The restaurant is already getting good positive feedback and is busy,” said Nina Tigonen.

This is the second Foxlow restaurant designed by Macaulay Sinclair, who also designed the first Foxlow venue in Farringdon.

Hawksmoor’s executive chef Richard Turner and Lewis Hannaford oversee the menu, which features the signature slow-smoked and charcoal-grilled dishes, along with lots of lighter, healthier dishes. 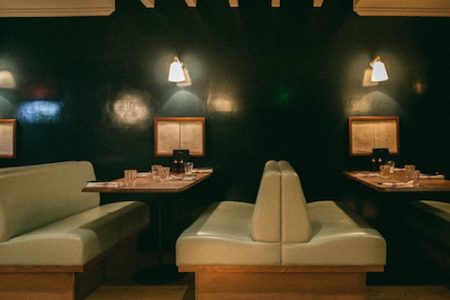 And to round off the meal, the desserts are equally impressive, with a tempting selection of sweet sensations such as: Panna Cotta with rhubarb, Chocolate and Hazelnut Pot, Bourbon sticky toffee pudding, salted caramel popcorn, Neal’s Yard cheeses, lemon and pistachio Polenta cake with sweet labneh and chocolate and salted caramel tart.

Unsurprisingly, the new Foxlow restaurant is already enjoying success and attracting a following – with recent reviews including: “An excellent new addition to Stoke Newington”…..”A fantastic addition to the area”…. “A really fun night at Foxlow”…… “Food was absolutely delicious”…..”Great food in a lovely setting”…..”Great food, great cocktails and great staff”…..”Top notch service” and “A welcome addition to N16.” 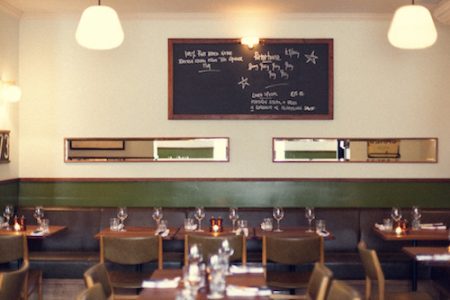 According to Foxlow: “When we opened Foxlow we just wanted to open the kind of restaurant we would like to live near.

“We focused on what we think we do best – incredible meat, great cocktails and a wine list made up of wines by passionate (mostly small) producers – but we added a brunch menu, plenty of salads and a few things that we’ve loved on our travels.

“Hopefully we succeeded. Time Out said we serve “food that will comfort and soothe: the sort that you want to eat after a break-up, or after watching too many episodes of ‘Homeland’ and maybe that’s a sign that we did.

“After all, all what we’re really trying to do is create a nice restaurant with great food and drink where you can get looked after by people who love what they do.”

Childhood friends Will Beckett and Huw Gott are the co-owners of the Underdog Group, and got together to open the Redchurch Bar in Shoreditch in 2003. The bar soon became popular and the pair then opened Green and Red, also in Shoreditch, offering Mexican food, before moving on to open The Marquis Tavern in Islington in 2006. That same year they opened the restaurant with which they became synonymous – Hawksmoor – in Spitalfields. 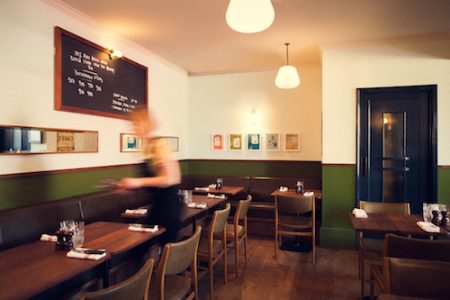 They followed this with the opening of a second Hawksmoor site in London’s Seven Dials in 2010 and Guildhall in 2011 – and then jettisoned Redchurch, Green and Red and the Marquess to concentrate on Hawksmoor. The pair then added a 60-cover bar to their Spitalfields site and opened a fourth restaurant in London’s Piccadilly in 2012, later branching out to open their first Foxlow site in 2013, followed by the second in Stoke Newington.

The practice is excited by the meaningful and insightful, not the superfluous or precious. They also believe in being distinctly different, but not in innovation for innovation’s sake; the past often informs the present.

Macaulay Sinclair understand that design and commercial needs must align, and therefore use a combination of rigorous investigation, exploration and consideration to achieve an informed perspective of every element of each project.

Open, honest and accountable, the practice works in partnership with clients, committing to their investment. Taking a hands-on approach, they helping to shape every client’s vision with a depth of industry-specific knowledge, experience and judgement. 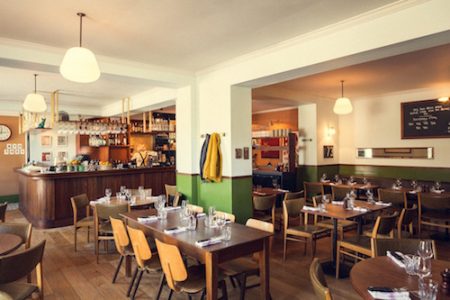 Commenting on the completion of the Foxlow Stoke Newington project, Macaulay Sinclair said: “We continue to build on our longstanding relationship the with Underdog group, with this being the second Foxlow of their roll out programme.

Other recently completed projects by Macaulay Sinclair include: Hawksmoor, Dishoom, Byron and Gusto.

Stebar Interiors is a family run construction company specialising in restaurants, pubs, bars and nightclubs. The company was established in 1998 and has a large highly qualified workforce with a wide range of skills.

Stebar carry out a wide range of services within building and shopfitting, including: drainage, groundworks, brickwork/blockwork, plastering, electrical and plumbing, carpentry first and second fixing, making and fitting bespoke joinery and decorating. 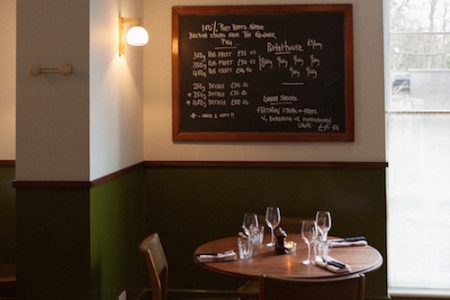 Stebar Interiors are a main contractor specialising in the delivery of refurbishments projects for a range of clients. On every project they undertake a thorough strip out of existing interiors, before working their way through first and second fixing, working alongside all trades to achieve the desired results.

The construction firm are well versed at co-ordinating sub-contractors for their clients whether they are direct or through themselves. From the start of a project through to the final finishes including decorating, fixtures and fittings Stebar are confident at delivering a quality finished article.

Stebar acted as the main contractor on the Foxlow project where they were responsible for the everyday smooth running of the venue. The team worked closely with restaurant owners to ensure the scheme ran on budget and to time schedules, as well as liaising with the client and design team to ensure high standards were maintained. 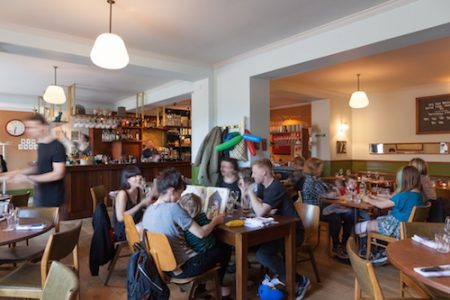 A spokesperson from Stebar commented:

“We are pleased to be involved at this early stage with Foxlow as it is an up and coming new restaurant chain soon to hit the high streets.”