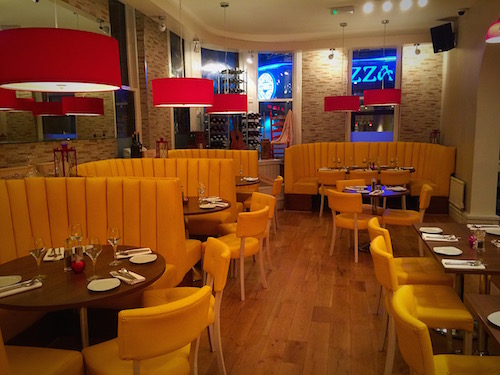 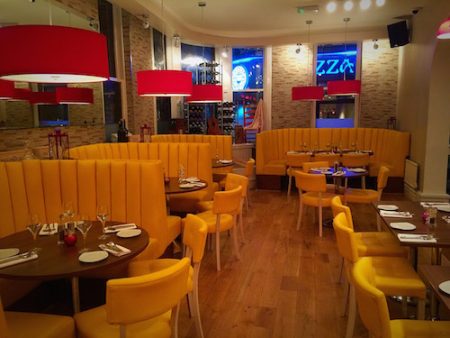 The restaurant sources only the freshest local ingredients and combines them to produce the best of Spain’s traditional dishes.

Located just off Deansgate on Ridgefield St, the venue is situated in the centre of the city close to Pizza Express and Grill on the Alley.

Coincidentally La Bandera used to be the home of another Spanish restaurant; Harpers, which was co-owned by footballing legend George Best. 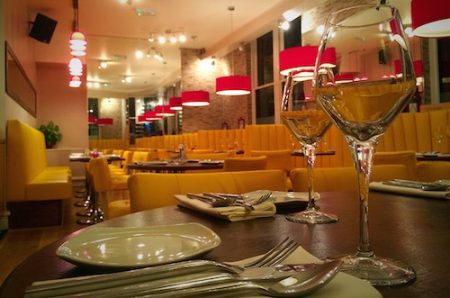 Despite still studying at university and only working on residential schemes previously Yasmin was confident enough to take on the challenge of designing her brothers’ new business venture. She commented:

“We used La Bandera’s menu as the inspiration for the interior design. La Bandera stands for the Spanish flag and so we have used bright colours that relate to the flag throughout the venue. We wanted to represent the north and south of Spain at La Bandera as well as our cuisine, tradition and general way of life.
“The first thing that catches your attention when you enter the restaurant are the yellow leather seats and the bright red chandeliers and lampshades. The flamenco designs are very eye-catching and contrast with the stone and marble tiles in the main restaurant space.”

Works began on site at the start of October 2014 and the restaurant opened in December of the same year. Construction works were undertaken by the La Bandera in house team and have seen the venue transformed. 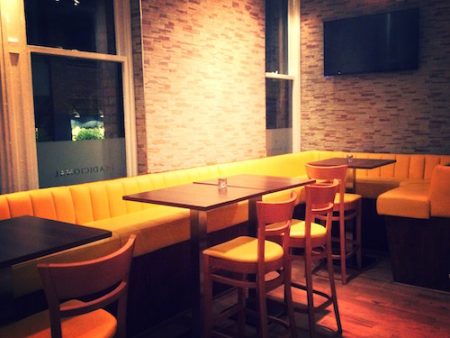 The restaurant now comprises 70 covers, with 50 in the actual dining space and room for 20 seated customers in the bar. The one storey venue was completely stripped out and reconfigured to make the venue more spacious and functional. The location of the kitchen has also been changed and the pass area was reconfigured.

The venue comprises a welcoming reception area and a large bar area complete with high bar stools. The restaurant space is served by the brand new kitchen located behind the bar on the left side of the venue.

Yasmin said the team did encounter a few challenges during the project:

“We were keen to fit in more seating however when the booths were built in we realised there wasn’t enough room for the initial number of covers. We didn’t add more seats in because we did not want customers to feel squashed or feel uncomfortable. 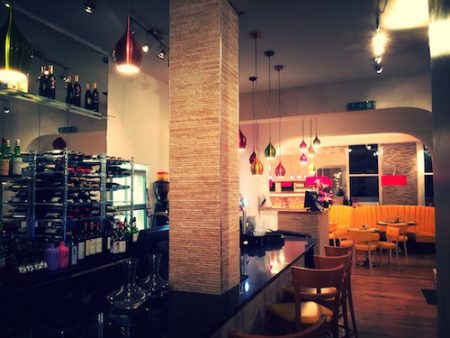 “Another issue was wanting to fit a large Andalusian arch from the south of Spain with mosaics and traditional designs but due to issues with the seating we were unable to fit it. Despite our difficulties we learned from them and moved forward.”

This project was a great opportunity for Yasmin and she particularly enjoyed using local suppliers and eco-friendly materials. She added:

“I am looking forward to working on more projects like this and using more eco-friendly products because I feel this is extremely important.”

The feedback to the venue has been great and the family hope to open more of these restaurants in the future.