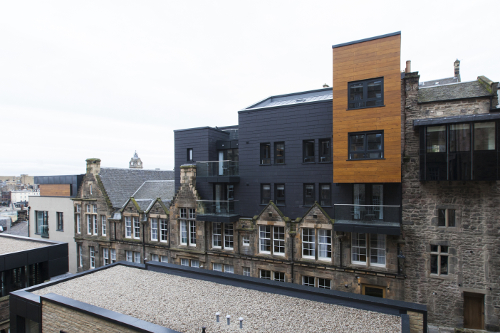 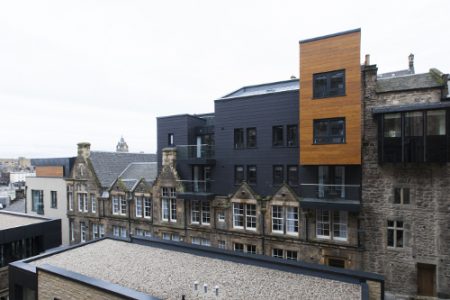 Creating a vibrant new quarter in Edinburgh’s Old Town, the regeneration of Advocate’s Close has won the coveted Project of the Year Award at the Royal Institution of Chartered Surveyors (RICS) Scotland Awards 2015.

Designed by Morgan McDonnell Architecture, the project knits together 11 buildings of widely differing condition and significance, to deliver this mixed use commercial scheme within a World Heritage site.

The project was undertaken for the Chris Stewart Group, an independent, privately owned property development and investment business.

With Motel One secured as the development partner for the hotel opportunity, the remainder of the Advocate’s Close project was financed through the company with the support of the company’s bank, Barclays Wealth, and without the need for government grants.

The total investment, including purchase and development totalled £46m. 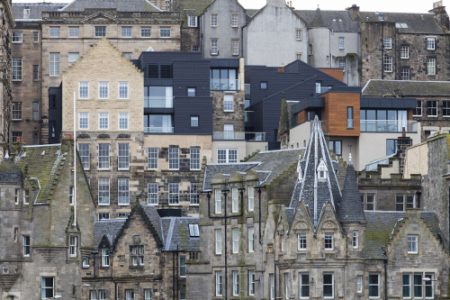 Commending the project, Colin Smith MRICS, Chair of RICS Scotland judging panel said: “Retaining and regenerating all of the existing buildings and restoring historical building forms resulted in a development which fits well within its impressive surroundings, whilst the contemporary additions are sensitive to the historical elements. It has brought a previously derelict area of Edinburgh back in to use for both tourism and leisure.”

Advocate’s Close also won the Regeneration award, which honours exceptional improvements to urban, rural or coastal areas that has contributed to the viability of the area.

The historic site was formerly occupied by the City of Edinburgh Council and encompasses nine listed buildings over 11 storeys and spans across four closes between the High St, Cockburn St and Market St.

The site drops over 10 storeys from the top to the bottom, and the buildings range in age from 16th to mid-20th Century. While many of the buildings are listed, the majority had been much altered since their construction, including reckless internal subdivisions, removal of upper storeys and the termination of public footpaths. 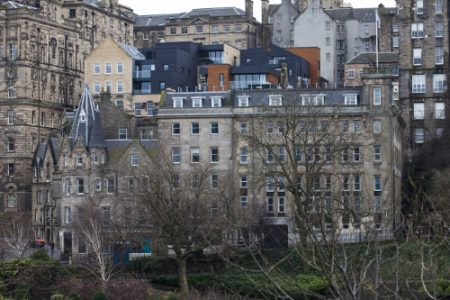 The scheme provides a new 208 room hotel – the UK’s first Motel One – 50 serviced apartments on the upper levels with restaurants, offices, bars and cafes opening on to and enlivening the surrounding squares and closes.

The characteristic herringbone pattern of development in the Old Town was well established by the mid-16th century. As the population of the area around the High Street grew through to the end of the 18th century, the potential for further development within this framework had been more or less exhausted with tenement properties of up to 10 storeys.

Following the demolition of many of the tenement buildings through the19th century, the site became home to the offices and printing press of the Evening News following the construction of a new boiler house in 1896. The City of Edinburgh Council gradually acquired ownership of buildings across the site on a piecemeal basis over the course of the 20th century before vacating in 2006.

According to Morgan McDonnell Architecture: “The design proposals within the context of the existing range of buildings and important heritage setting required balancing primary objectives, including making the best use of existing buildings in terms of efficient use of resources and retention of architectural heritage, as well as to create a desirable place to stay, work and socialise in order to guarantee continued habitation and maintenance of the building fabric and civic vitality. 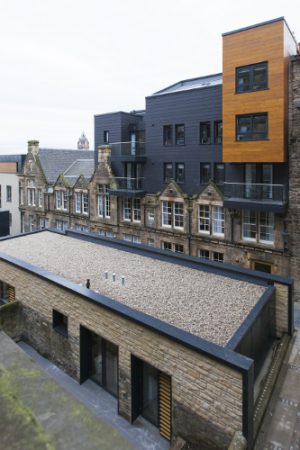 “It was also necessary to respond positively to conservational aspirations for the enhancement of the World Heritage site and conservation area, whilst at the same time promoting contemporary design, in this case, as a rational means of resolving inherent problems of the site, knitting together disparate constructional and spatial elements and to present a more coherent idea of the architectural evolution of buildings on the site.

“Our challenge was therefore to create a vibrant new quarter in the Old Town that combines the rehabilitation of historic buildings and public realm with alterations and interventions which participate in the continuing organic architectural evolution of the Old Town.

“The design borrows from the eclectic range of historic architectural forms and styles, each redolent of their particular era, to continue the established pattern of overbuilding and modification. Whilst retaining all of the existing buildings, twenty-first century elements have been carefully added to reinstate the historic form and mass of the site.

“At street level throughout the site, we have accommodated a variety of commercial units including a restaurant, offices and a bar/ bistro. This includes revitalising Roxburgh’s Court to form an outdoor terrace, and overall the proposals increase street activity and pedestrian movement throughout the site, thereby adding vibrancy to the area. A new pedestrian thoroughfare linking Advocate’s Close with the News Steps was also created. 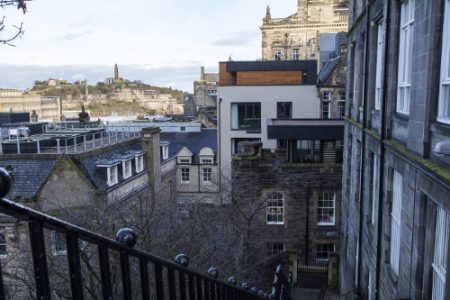 “New additions include the formation of roof terraces with views across public spaces or, in most cases, spectacular views across Edinburgh’s iconic skyline. New rooftop extensions were built to replace previously removed upper floors. The new additions have been designed so that there is a clear historical distinction between old and new, a process which is entirely characteristic of building in the Old Town, while attempting to unify the different elements through the careful selection of building materials.”

Due to the number and wide age range of existing buildings on the site, a variety of external materials were present. Most of the buildings were built of exposed random rubble or ashlar stonework, however later alterations had grey cement render finishes or exposed brickwork and concrete.

Within their material palette, the architects have attempted to unify these disparate elements by replacing the grey render with a buff coloured render, and used natural sandstone, slate, dark grey terracotta cladding, timber and aluminium for new building elements.

Dark grey aluminium windows in the new elements complement the surrounding cladding, in contrast to the existing timber windows, which were overhauled and repainted white. 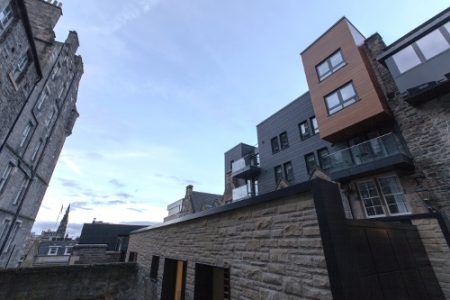 Significant archaeological investigations were required, however, by following historical building lines, these were kept to a minimum whilst also respecting the historical herringbone street pattern.

A number of existing facades were retained whilst the internal structure was modified or, removed and completely replaced with a new steel and concrete frame. This was necessary to allow a reinstated gable block with crow steps to be constructed above.

Oversailing issues meant a crane was impractical, therefore hundreds of steel beams were brought into the building by a system of tracks and pulleys, a major logistical issue in itself.

Existing timber beams were carefully removed, stored off site, redressed and reused, most notably as fixtures and furniture in The Devil’s Advocate bar. 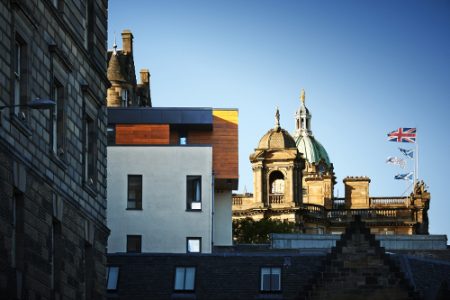 Since completion, the Advocates Close development has been warmly received within the local community, and has won a number of other architectural and design awards, in addition to the RICS accolade.

Most importantly however, the area between Warriston’s Close and Byres close is now a vibrant community rather than the run down and unloved area it recently was, and once again forms an important part of the fabric of Edinburgh’s historic Old Town.