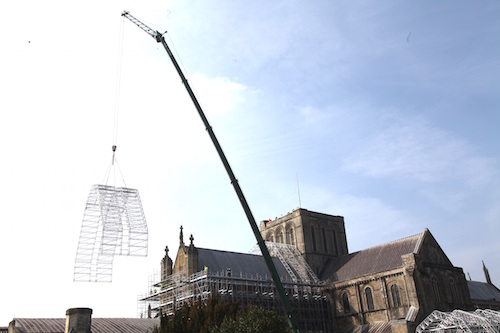 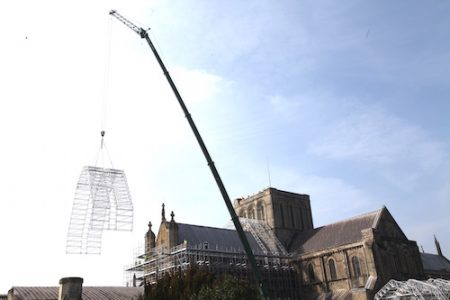 Comprising the wide-ranging conservation, repair and significant enhancement of the nationally historically significant Winchester Cathedral, is the ‘Kings and Scribes – Birth of a Nation’ project.

The project explores the cathedral’s central role in centuries of the nation’s history, telling stories of power and wealth, turbulence and influence.

The building, which is almost one thousand years old, played a central role in England’s history throughout the middle ages and may lay claim to be one of the most significant historic buildings in Britain.

Winchester Cathedral and its Close form a key central part of the city. The cathedral is a dominant building in every respect. The building’s multi-layered archaeology, built fabric and art treasures bring with them a variety of conservation issues as well as great opportunities for public engagement.

In September 2012 the cathedral won a National Heritage Lottery Fund award of £10.5 million for the ‘Kings and Scribes – Birth of a Nation’ project. This project, which also requires additional funding by the cathedral, provides for repairs to the roof, windows and stonework, plus the installation of exhibitions in the cathedral’s south transept. The total cost of the works is an estimated £20.5m, of which £2.4m is still to be raised.

Roofwork in underway on remoulding and replacing 500 tonnes of lead, the condition of which had deteriorated over time. This element of the scheme commenced with the raising of a scaffold roof, which was was(delete) hoisted in four sections a distance of 12m above the cathedral tower, then lowered onto the cathedral’s east roof.

This is just one part of the project to repair and conserve the roof spaces at the east end of the building, which also included building a similarly impressive ‘bird’s nest’ structure inside the cathedral to enable the preservation of the roof spaces and the presbytery high vault with its medieval bosses.

Recent analysis has shown that there are four different painted schemes in this area, dating from the early 16th century, the 1630s, 1819 and the 1950s. Some bosses have in the past been painted a stone colour, obscuring their original decoration, which is being restored to its original vibrancy. 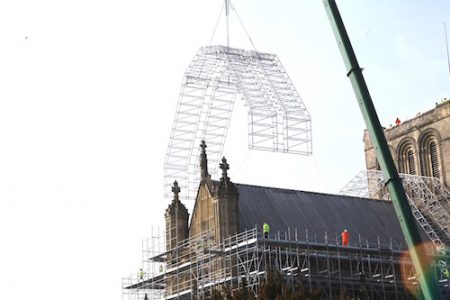 The earliest glass in the cathedral dates back to the 1330s. In 1642, during the Civil War, the Great West Window was smashed. Although the shards were retained and gradually reassembled, this was only possible in a relatively haphazard fashion, and that is now considered one of the great features of the cathedral’s glass.

Thankfully, the stained glass in the presbytery was too high up to be easily destroyed and this remains a significant example of late-medieval glass painting and design.

However, much of the glass is corroded, resulting in a loss of the painted detail. In many places, the joints and surrounding stonework have also corroded and some of the glass segments have already fallen out. An extensive conservation programme is restoring the glass to its former colourful beauty.

The world famous 12th Century Winchester Bible will now be more accessible and fully interpreted to the most modern standards in a fantastic Romanesque space on the ground floor.

A mezzanine will accommodate a rolling display of the cathedral archives and give access to the 17th century Morley library, increasing accessibility to those rare books and documents.

Additionally the Triforium Gallery will house two completely new exhibitions. ‘Decoding the Stones’ will focus upon the story of the creativity of generations of people who have been inspired by the building to shape and reshape its architecture.

The opportunity for learning is also being enhanced by the refurbishment and extension of the cathedral’s learning centre, which will welcome thousands of children and people of all ages, enabling further outreach into the community.

The original education centre was in desperate need of refurbishment and expansion. Disabled access was severely restricted and the facilities were old, cramped and unwelcoming.

The new building will enable the centre to provide a much greater range of activities, and there will also be an ‘apothecary garden’, where herbs and medicinal plants will be grown to reflect the area’s monastic history. A sensory garden is also being created which will use the scents and textures of plants to enhance the experience of disabled visitors.

The overall project commenced in September 2014 and is expected to take between two and three years to complete.