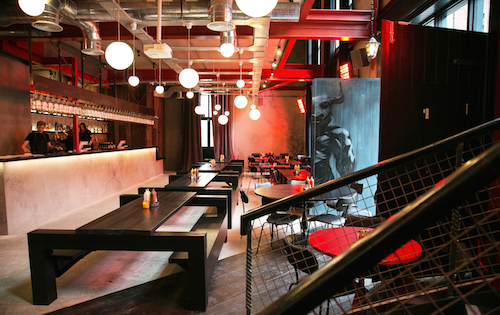 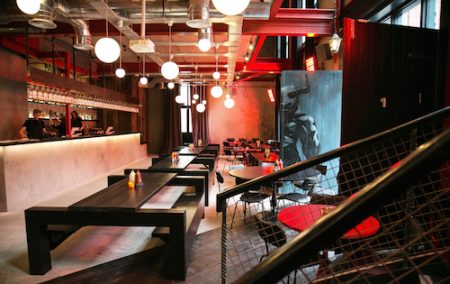 Bar, restaurant and general late night party venue OX184 has opened its doors in the up and coming Cowgate area of Edinburgh city centre, following an extensive renovation project.

Renowned for its wood-fired grill, craft beer and whisky the venue provides a quirky environment for diners and drinkers alike to sample the best in fresh produce and refined beverages.

The two storey building has had numerous functions over the years including being used as a burlesque club and Capital nightclub. KBA+D worked alongside venue owners Fuller Thomson and main contractors Due North to completely revamp the venue and turn it into the impressive joint it is today. 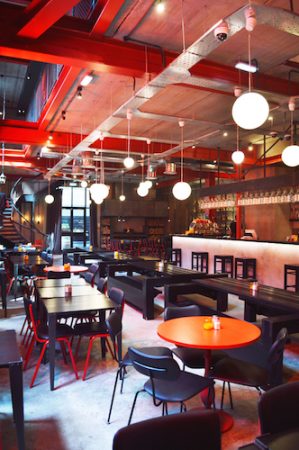 The on-site team began works in late 2014 stripping out the space, removing the curved plasterboard and heavy Gothic timber framed bars, as well as removing a section of the first floor to create a mezzanine level.

We caught up with Cara Murphy, interior designer from KBA+D, to find out more about the project. Cara commented:

“We became involved after being approached by the client at the end of summer last year; they wanted ideas on what to transform their new venue into. We began the design process in September with focus on bringing their successful ethos of craft ale, quality drinks and good food that Fuller Thomson do in all of their other venues in Edinburgh and across Scotland.

“At the start of the design process we focused on New York street food themes, the theatre of open grill cooking and a sense of community which is echoed in the table structure and bespoke grill tables on both floors. In order to get the existing building to work for us we had to strip it right back to emphasise its bare bones, the opposite of what it once was known for. You could almost feel the building give a sigh of relief as the previous layers of the interior were removed giving the building its dignity back.” 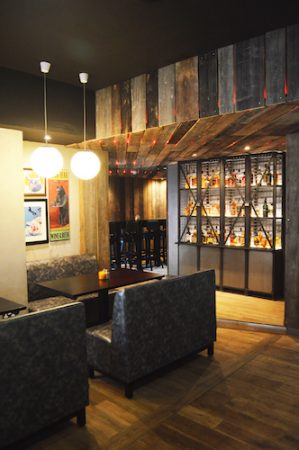 The venue is situated below normal city level, as are all of the venues in Cowgate, and as part of the project the team have created brand new entrances on either side of the property, removing the existing entrance from the front of the property, a reorientation of it and transforming it into old factory style wooden doors that can open during the summer.

As customers approach the building they are greeted by a small courtyard to the left of the building comprising a large log store. Upon entering the venue a large, original staircase takes centre stage in the industrial space, as do the polished concrete floors with inlaid scaffold board timber.

A large open grill area, which has been constructed by specialist blacksmiths, located alongside the kitchen is another feature of the space as are the constructed bench tables and angular, bespoke wooden benches. 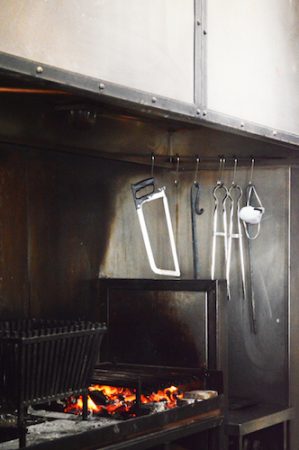 The main bar on the ground floor has been covered in external render and finished with a graffiti pattern as with the internal walls making the bar feel permanent and built in. The back bar display have been crafted in line with Fuller Thomson’s brand guidelines comprising a range of back bar taps and Georgian wire glass panels, allowing staff to note the special beers.

Long, black curtains dress the front windows of the space, creating drama and enhancing the double story and inviting customers to the upper level, and large velvet curtains on round railings can be found at the side of both rooms.

Upstairs the open kitchen and lowered ceiling provide a more relaxed environment, with an expansive booth seating structure interrupting the space like some industrial remains. These booths are made up of a series of black timber stud frames and bare upholstery webbing which create intimate boothed zones all screened off with soft black voile curtains. 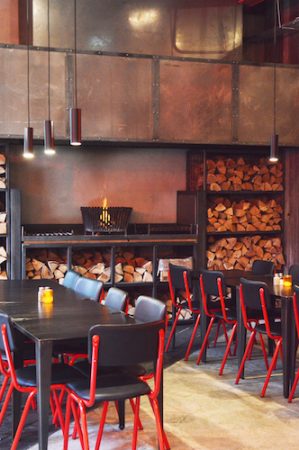 With a huge selection of spirits, a whisky tasting room, a dance floor and a plethora of dynamic spaces to relax and let your hair down, customers are guaranteed to enjoy the OX184 experience.

The venue is situated in a conservation area and so KBA+D had to be careful with their proposals to the council for the building, especially regarding the structures signage and frontage.

Cara said, despite the challenges, it has been a pleasure to be part of this project. She added:

“Working with Fuller Thomson has been a great opportunity for us to do something different and it has been critical to develop something that is fresh for the Cowgate area. The firm have strong ideas of what they want to achieve and that allowed us to take their idea and passion to get something unique across in an area of the city which is up and coming. 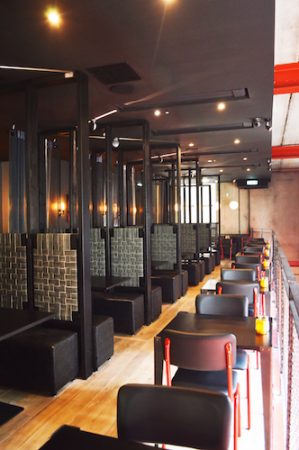 “You can see they are passionate about what they are doing and this is something that has filtered down through all of the contractors and suppliers along the way. We hope to work with the clients again in the future.”