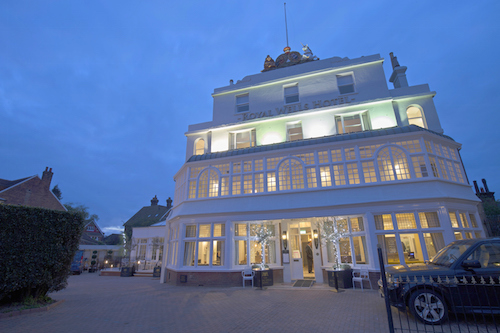 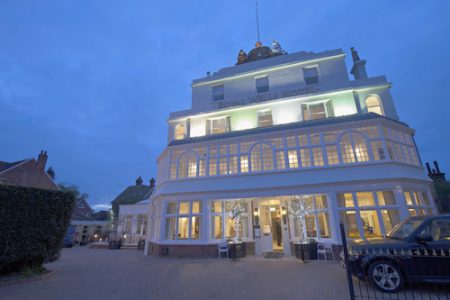 Shepherd Neame opened their latest hotel in Tunbridge Wells, in April this year, after a lengthy £2.4 million renovation project.

The Grade II Listed Royal Wells Hotel was bought by Shepherd Neame two years ago with the intention of revamping the historic structure and transforming it into a stunning hotel.

Premier Hospitality caught up with Martin Gooden, Head of Property Services at Shepherd Neame, to find out more about the brand’s latest venture. Martin commented:

“The building is very well known in the area and at £2.4 million is the highest valued project Shepherd Neame have ever carried out on a single property on our estate. The project included a top to toe refurbishment of the existing premises, as well as the construction of a restaurant and brassiere on the side of the property and a small courtyard garden. 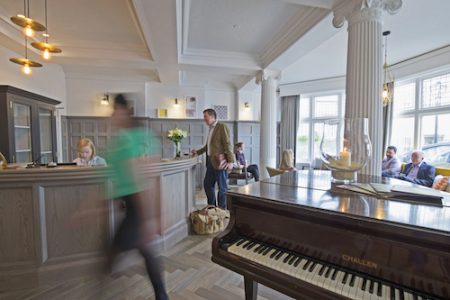 “The building, which was built in the late 18th century, had a garage on the side of it which used to contain a small restaurant and storage space. We decided to remove this building in order to create a new orangery which would flood the building with more natural light, as well as make the hotel more spacious and suitable for today’s retail environment.”

The project has retained the hotel’s character, which is well known and appreciated in the area, and has been revamped by emphasising the structure’s existing features. The Worlds Brassiere is now situated in the venues traditional orangery and comprises an array of contemporary features including two large lantern lights and modern fittings and fixtures.

The restaurant overlooks the newly constructed courtyard garden located by the side of the hotel, offering stunning views of the walled garden, which offers a lovely sunny spot for diners to enjoy. 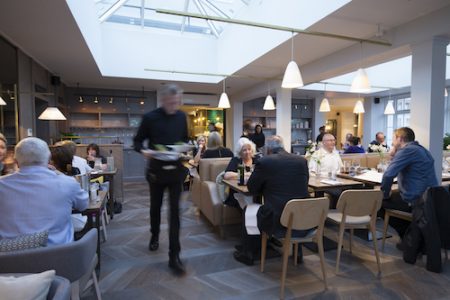 The interior of the venue has been arranged into zoned areas allowing guests to move from the brassiere, to the bar area, then on to the darkly lit library bar at the back of the space, and then onto the open bar area which opens up into the reception area.

Upon entering the hotel guests are able to see through every area of the hotel, as well as into the restful garden at the end of the property.

As part of the project the kitchen has been completely overhauled with modern equipment and brought up to standard.

The refurbishment project has involved a complete revamp of the function rooms in the building. The Ephraim Suite, was previously a small function room at the back of the hotel, with a capacity of 70 people. 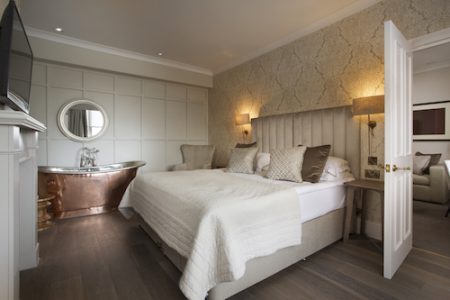 Shepherd Neame, upon purchasing the property, gained a number of requests about larger functions and decided that as the building is so large it does lend itself to functions and large events.

With this in mind the team set about trying to enlarge the function space by breaking through into an adjacent room and creating a split level function space. The multifunctional room can now be split in half and used as two separate rooms or opened up and utilised as one grand facility.

The Victoria Suite, a smaller room on the side of the Ephraim Suite, has also been refurbished to give the hotel operators more flexibility when hosting functions. Thanks to all of the revamping works this area can now hold approximately 120 people.

The hotel also boasts a further 60 person function room on the first floor, The Alexandra Suite, at the front of the building complete with an ornate glass conservatory on the frontage of the space. This is the area that now holds a wedding licence and is the room most of the hotel’s wedding bookings utilise. 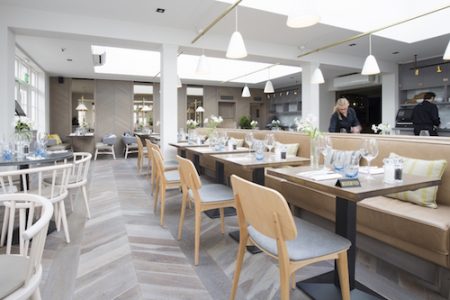 The hotel has also been made much more accessible with a platform lift suitable for disabled customers, as well as a brand new main lift.

The 27 bedrooms at the Royal Wells Hotel have been designed in three main styles, a Superior Room, an Accessible Room and an Eclectic Room. The hotel’s executive Superior Rooms comprises a range of impressive features including a copper freestanding bath and a separate lounge area.

The Accessible Rooms have been designed to facilitate less able guests and contain rolling showers and twin basins. The Eclectic Room are the smallest on offer at Royal Wells but arguably are the most unique. Each room comprises its own individual design features and on trend finishes including vibrant and quirky fabrics, styling and wallpapers. Four of the hotel’s bedrooms are also family rooms. 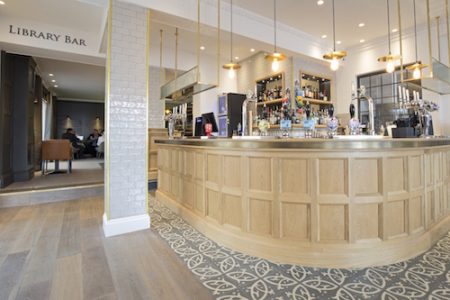 Portsmouth based Turveys acted as the main contractors on the scheme working alongside Shepherd Neame to overcome the challenging nature of the project. Martin added:

“As the hotel was closed during the project we were keen to get it open as soon as possible, we also had a wedding booked in for the 1st of May so that gave us a definitive deadline. In order to open on time we have had to monitor progress closely to make sure we delivered on time.

“The Royal Wells Hotel is our biggest investment yet and we are very confident in the site, as well as being really excited about the hotels potential. The response from the locals has been really positive; they are really pleased we are investing in the building.”