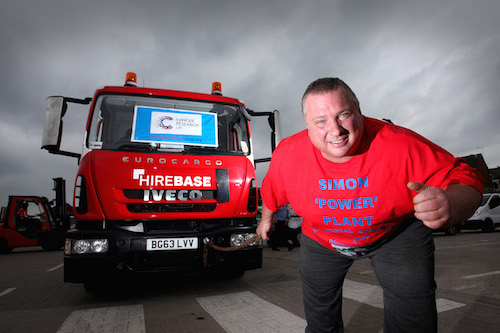 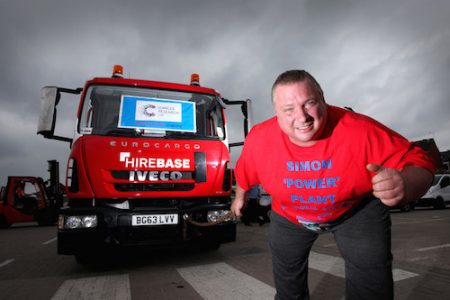 A builder dragged a 12 tonne Hirebase truck with one arm, setting a new World Record at Buildbase in Derby, as the merchant launched its first Charity Day in aid of Cancer Research UK.

When he’s not doing his day job as a builder, Simon is training with weights and heavy lifting. Training at least three times a week contributes to his 26-stone weight, 63-inch chest, 37-inch thighs and 25-inch arms.

His high protein diet means dinner can include six sausages, eight jacket potatoes or a whole chicken. Veg isn’t on the menu.

Simon has been going to Buildbase in Derby for his building materials for over 20 years. He approached the merchant with the idea to help boost fundraising for its first national Charity Day following the recent announcement that Cancer Research UK is its charity of choice. Colleagues dressed up in Hawaiian fancy dress, and there are prize draws and competitions taking place in Buildbase branches across the UK.

The new World Record will contribute to the UK’s entry to the Record Holders Republic’s (RHR) World Record Organisation Cup challenge, which will see the UK and US compete as a team against India, Canada, Russia and Indonesia to achieve the most World Records from 26 June-31 July 2015.

Simon said: “This was tough. Getting over the static inertia and the truck moving is the hardest part. The fact that I do this for all of the good causes is what pushes me on. I feel like I’ve been given a gift and if you put that to good use you can’t go wrong.

“I do this because I want to raise money and help people. I’ve been coming to Buildbase for over 20 years so I have lots of friends here and it’s good to be able to help them out with their fundraising.”

Richard Lee, Branch Manager at Buildbase Derby said: “Simon is a regular at Buildbase, so it’s fantastic that he wanted to attempt his latest World Record with us. He is so determined, I knew that he would be successful. He has helped us to raise lots of money today. I’d like to thank all of our customers and suppliers who came along too to support us.”