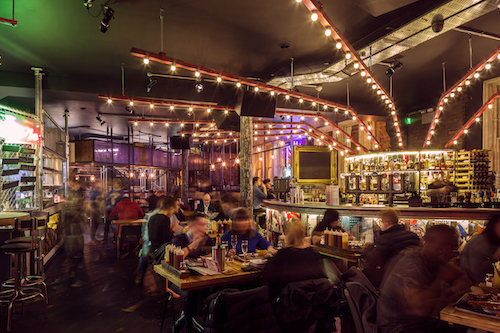 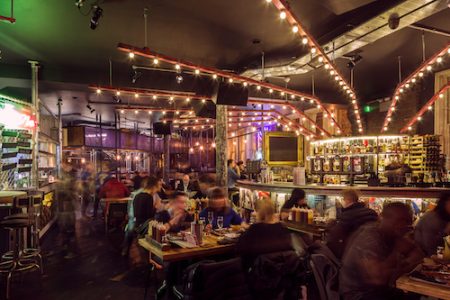 Situated on Lloyd Street, on the corner of Manchester’s Albert Square, Red’s True BBQ is a dark, yet heavenly restaurant serving up a tempting array of tasty meat treats.

The restaurant, from founders James Douglas and Scott Munro, is one of a growing collection of Red’s True BBQs – joining Leeds, Nottingham, Headingly and Shoreditch – and provides Mancunians (and city visitors) with a unique barbecue experience unlike anything else.

Independent agency Blacksheep was responsible for the interior design work on Red’s True BBQ Manchester, providing all aspects of the venue’s design, including lighting, furniture, signage and graphics. In order to fully realise the Red’s design brief, Blacksheep spent time with the brand’s creators James and Scott and then fully immersed themselves in the concept. 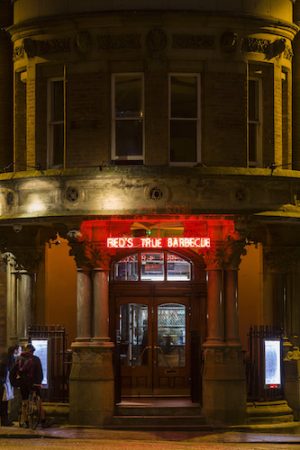 Although Red’s True BBQ already incorporates strong religious references, for this particular addition to the portfolio Blacksheep were keen to evolve the concept, by focusing on the darker sides of faith. The design agency also injected a dash of humour into the mix so that diners can feel truly blessed by their surroundings whilst having fun at the same time.

“I met James and Scott more than a year ago and my first impression was that they have so much energy, so much passion and they are so switched on when it comes to barbecuing. When we first spoke they already had one restaurant, which was in Leeds, and they were looking for a design team to take the brand forward.” 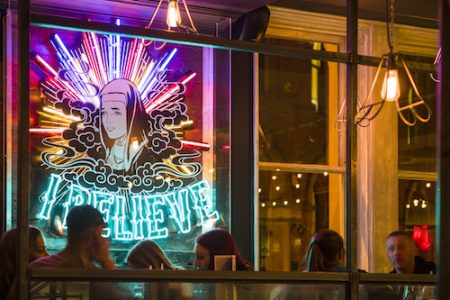 “The brief was to take the essence of what they already had and then move it on to the next level.”

Red’s True BBQ Manchester covers an area of 6,000 sq ft and is divided up into a number of spaces, each presenting something a little bit different; a little bit more intriguing.

“There is an almost religious devotion throughout the Reds concept in relation to how the meat is cooked and this is something we played upon throughout the design. So the cooking always takes centre stage. When guests arrive they see the Pit where Pitmasters take meat from huge smokers and flame grill burgers over the grill right in front of them. Then moving through the space there are a number of high tables with people dining and large gantries stocked out with hickory chips.” 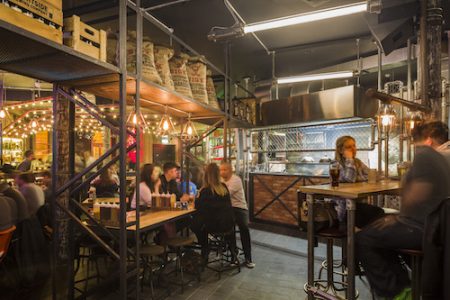 “Scott and James were keen the restaurant be an all-day dining destination as well as late night bar so there is a lot going on in the space. The lit fairground-esque bar, raised pulpit like DJ booth and live band area all make it somewhere you can come for dinner and end up spending the whole night.”

Design highlights of the restaurant include confessional booths and a private dining room, complete with a mortuary table and blackened burnt timber panelling. Blacksheep were keen to keep the design as raw as possible to remind guests of the primal link between man and beast, offering a venue that broke from the mould to present a very different experience for diners and one that would be very memorable. 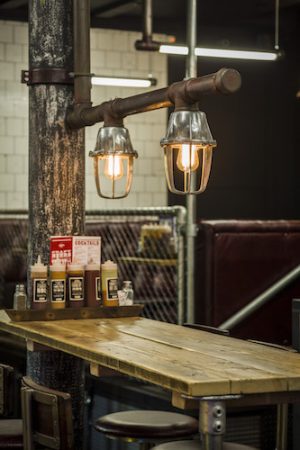 “We wanted this restaurant’s design to be a bit darker, a bit sinister, a bit more twisted; which is why there are confessional booths between the toilets.”

Dawnvale was the main contractor on Red’s True BBQ Manchester. The company specialise in the manufacture and installation of commercial bars and restaurants and is currently the distributor of America’s number one smoking oven, Southern Pride. 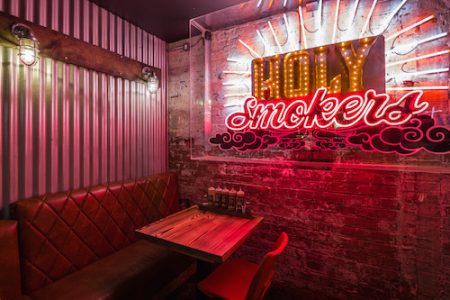 “We have been working with Red’s True BBQ since the first site in Leeds and it was important for us to be able to maintain that working relationship as they progress with their expansion and future roll-out program. We introduced the first American Southern Pride Smoker into the UK market with Red’s True BBQ and it’s very rewarding to see this smoker now being used in their restaurants.”

Red’s True BBQ serves up a devilishly enticing menu crammed with delicious choices, from burgers and sandwiches to steaks and little plates. Sides are also available and are divided up between the Humble offering and the Devine collection. 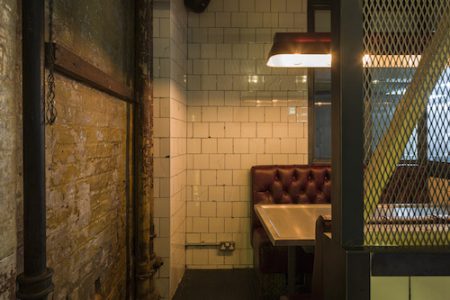 For those who like to spice things up even further, Red’s True BBQ offers the Custom Meat Combo selection, which includes a mix of meat dishes and sides. All combos are served on a butcher’s paper tray and can be ordered with a dash of sauce – either the Unholy sauce or the Pickleback BBQ sauce.

“Barbecue is quite new to the UK, so we have created something which we feel will make an impact. We were delighted to work on this site in Manchester, because there is a gritty element to the city which we felt was really in line with the brand and I really love that.” 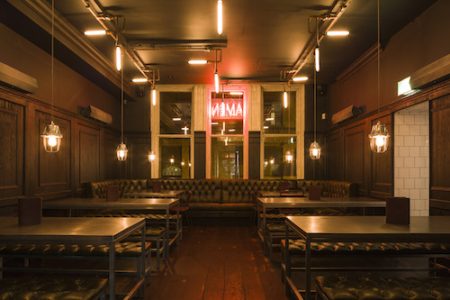 For more information about Red’s True BBQ Manchester or to take a look at the restaurant’s menu, please visit: www.truebarbecue.com/manchester/ and if you venture into Reds, don’t forget to tag your dining choices on Facebook, Twitter and Instagram: #LetThereBeMeat.