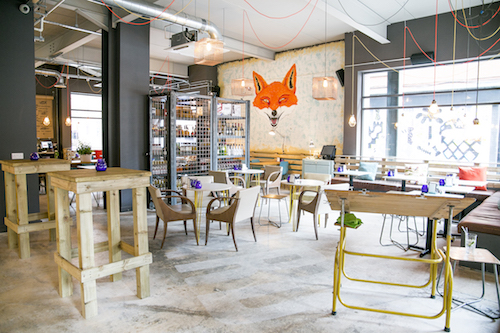 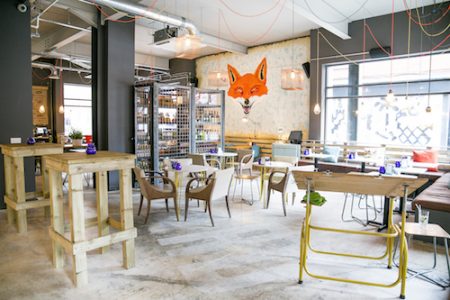 Serving up their secret recipe of fried chicken, in the recently opened, retro-themed bar and restaurant Yard & Coop, owners Carl Morris and Laura Morris are well on the way to creating Manchester’s hottest destination, as puckish diners flock to their Edge Street venue.

The Yard & Coop team has aimed to “create a restaurant that captures the very best of dining out in Manchester, bringing the fun back into the entire experience.”

Carl and Laura (who are not related), came up with the concept after they recognised the trend for fried chicken moving from America to London.

They spent a whole year testing more than 800 different flavour combinations, before discovering what they believe is the winning formula. 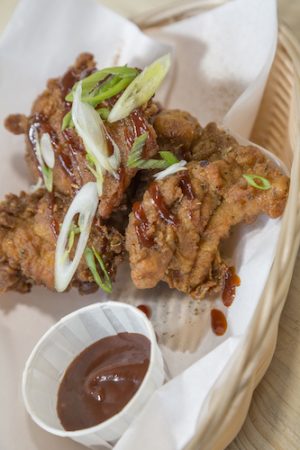 According to the restaurant:

“We discovered the secret recipe for our very own buttermilk fried chicken and we think it’s pretty special. Yard & Coop is all about serving up proper fried chicken with tasty sides, classic cocktails and craft beers, and having a damn good time doing it.”

It takes two days to prepare the buttermilk chicken before it’s fried. First the chicken is brined for 24 hours to make it really moist. Then it’s blended with eleven different herbs and spices in a secret crumb* recipe to give it a peppery, spicy and crispy coating that is delicious on its own, or when combined with any of the restaurant’s dustings and sauces.

The restaurant also offers an impressive range of bottled and ever-changing guest draught beers, and a wine menu designed to compliment the chicken flavours, plus barrels filled with ready-to-serve cocktails behind the bar.

The venue was designed by GA Studio; main contractors were Halls Builders.

The new bar and restaurant took shape in a former office space in the Northern Quarter, stripping the space back to the semi-industrial shell and exposing the original concrete floor. 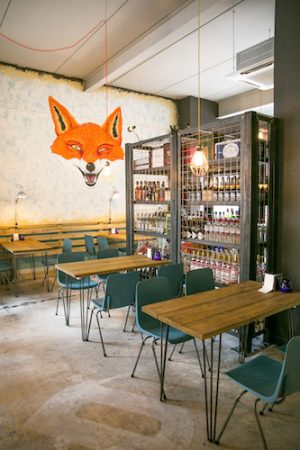 The restaurant is organised around separate dining areas with 120 covers.

“The interior is split into the ‘Yard’ and the ‘Coop’, (reflected by subtle stenciling on the floor). The ‘yard’ is a more informal drinking/eating area encountered when you first enter the restaurant, with retro Formica tables, school style stools, 60’s lounge chairs and caged light fittings. 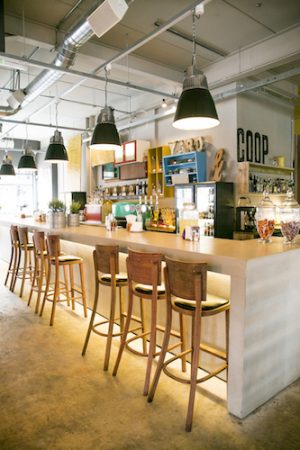 The bar itself is faced with concrete and runs the depth of the venue, the back bar includes retro sourced cabinets used for display and storage, as well as a large 50’s style fridge.

Other features include a rural post and rail fence which runs around the perimeter of the restaurant; which acts as a seat back for the fixed banquette seating. A hand wash station has also been integrated into the bar.

The colour palette evolved from a 1950s inspired theme with splashes of colour and thoughtful details against the stripped back, exposed space, creating a laid back and friendly atmosphere.

Large feature graphics transform walls within the space, including the most prominent, a large fox’s head mural, painted by a local artist.

As the restaurant is located within a conservation area, external works were limited however the façade is transformed by installing feature illuminated signage and graphics in the windows on the main Edge Street elevation.

The restaurant opened in July and has been popular with the Manchester food scene, with lots of positive comments and good reviews. 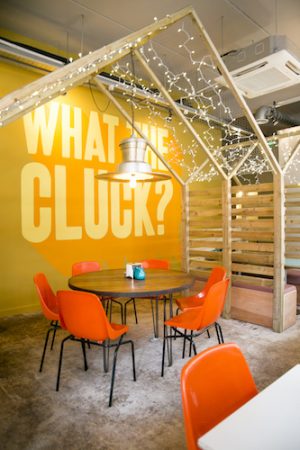 Specialising in all aspects of building works across the board, Hall Builders have a wealth of experience in their three years of operation. The company has completed a range of projects, typically, in the private housing sector.

Hall Builders acted as main contractor of the Yard and Coop developments, taking responsibility for the entire major works that took place on site in terms of a construction aspect.

Premier Hospitality spoke to Damian Hall, Part-owner of Hall Builders along with his brother Steven; to find out some information on the project. Damian told us:

“It was a great project to work on, with good working relationships on all levels. Also, it was something a bit different for the portfolio.”

“As a company we pride ourselves on providing an excellent service to our clients, ensuring the job is done how it should be.”

Taglec Electrical specialise in commercial and domestic electrical installation works for the construction industry. The company has been in operation since 2010, but company owner Rob Tagg has more than 25 years’ of experience in the industry.

“It was great to be involved in a project like Yard & Coop, especially in Manchester’s Northern Quarter.”

“At Taglec Electrical we pride ourselves in the quality of our workmanship and our customer service.”