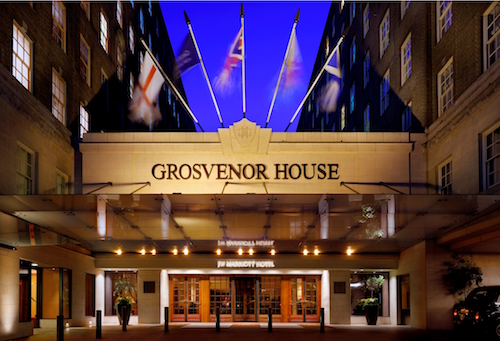 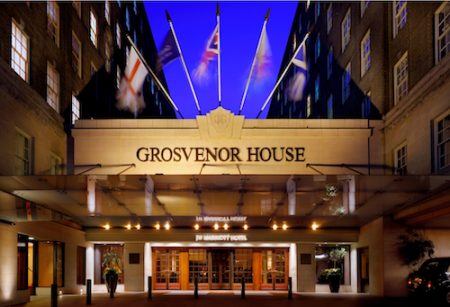 Grosvenor House, A JW Marriott Hotel is the largest five star hotel in London with a rich history and heritage dating back to 1929.

Situated in the heart of London overlooking Hyde Park in exclusive Mayfair, it holds one of the capital’s most desirable addresses in ‘Park Lane’.

Remaining true to the hotel’s history and magnificence, each bedroom has the perfect balance of classic and contemporary décor, offering a stylish and charming stay. Similarly, each refurbished suite is inspired by the proximity and changing seasons of Hyde Park. 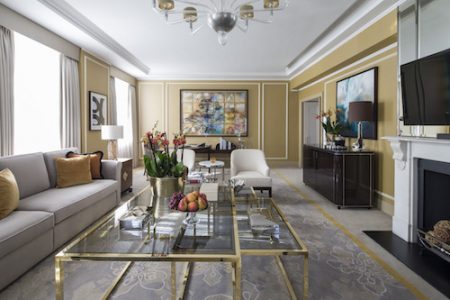 A range of facilities and services are also available for guests such as a brand new executive lounge which opened August 2014, 24 hour in room dining, lavish treatments at SanRizz and premium Star Trac equipment at the Fitness Centre. A Business Centre is also available and high-speed wireless internet access is also available in all rooms, and complimentary in the hotel public areas.

The two refurbished suites that have joined the hotel’s suite portfolio are named the Royal Hyde Park Suite, and the Royal Mayfair Suite. The transformation began during February 2015, with a £7.4million total suite investment. The two stunning Royal Suites have now been united with 40 other quality category suite refurbishments such as Premium Park View Suite and The Howard Suite.

In “The Next Chapter” of a compelling Grosvenor House story, the inspiring suite project directed by GA Design, has maintained the historic luxury and grandeur of the hotel whilst infusing a more chic, modern British feel. 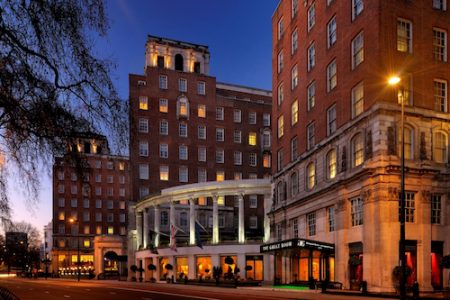 The Royal Mayfair Suite and the Royal Hyde Park Suite were named with both the hotel’s royal heritage and prime location in mind, with designs and finishes taking inspiration from the hotel’s rich and historical association with global travel and British innovation.

Grosvenor House is known for its sense of style and sophistication, giving guests a homely yet refined experience away from home. That beautiful charm remains in the Royal Suites, with palettes of warm neutrals and accents of colour mirroring the altering seasons of Hyde Park. Sculptural ceramics, large format commissioned artwork and framed imagery also contribute to the splendour of the suites.

The Royal Mayfair Suite enables guests to split their time between relaxation and productivity with a private, state-of-the-art study. The Royal Hyde Park Suite will entice those who wish to entertain, with a grand dining room catering for up to 10 guests and artwork vibrant in colour and tone throughout. Both are 170² metres in size and complimented with additional interconnecting guest bedrooms. 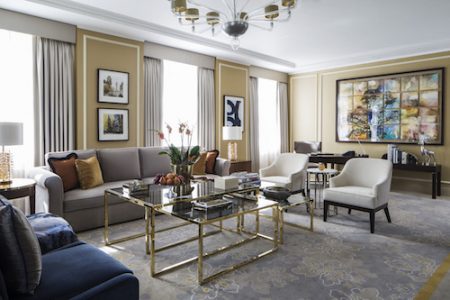 “We are excited to have completed the latest chapter of our story. Our Royal Suites pay homage to our fascinating past whilst acknowledging the excitement of our future with a fresh, present day relevance to suit the expectations of today’s accomplished global traveller.” 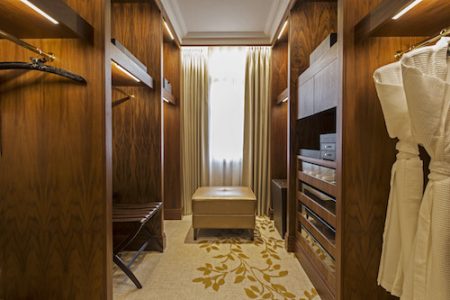 “Our enriched suite portfolio takes our total inventory to 496 bedrooms and suites and joins our newly refurbished Executive Lounge which opened at the end of last year. A brand new suite has also been crafted in the position of the previous Executive Lounge and we have named this suite The Howard Suite after Howard Hartley, one of the hotel’s longest standing team members with over 30 years of service and hotel ambassador to visiting overseas families and Heads of State.”

Offering a wide array of culinary experiences, Grosvenor House ensures there is something for everyone to try whilst dining at the hotel, whether it is award-winning afternoon tea or a glass of champagne in The Park Room, to table service in the welcoming atmosphere and privacy of the Library. 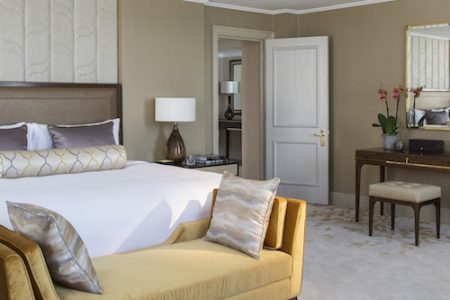 Promising a fantastic dinner, JW Steakhouse is a classic American Steakhouse that represents the hotel’s historical American connections, whilst demonstrating its expertise in steak. Corrigan’s Mayfair is another restaurant within the hotel, delivering exceptional cuisine including a selection of meat, fish and vegetarian dishes.

Impressively, 200 types of rare, single barrel and small batch Bourbons are on hand at the Bourbon Bar, in addition to the exciting and playful list of cocktails on offer at the famous Red Bar. 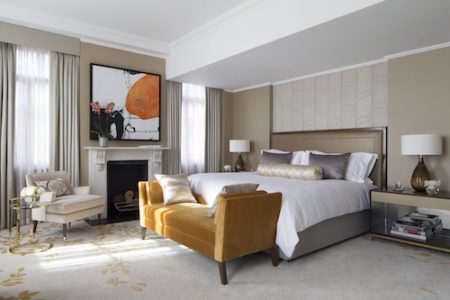 Until the 1730s, the site on which Grosvenor House now stands was meadow and pasture land. The land was owned by the Grosvenor family, early property developers who soon became the richest urban landlords in England. With their financial success came social advancements and in 1874, the head of Grosvenor family became the first Duke of Westminster by Queen Victoria.

The first building on site was a large detached house and its first owner was Lord Chetwynd. The house then passed through several owners before The Duke of Gloucester, brother of King George ΙΙΙ, acquired the house in the 1760s and lived there for 40 years, during which time it became known as Gloucester House. The property changed hands again and in 1808, Lord Grosvenor purchased it and moved in, re-naming it Grosvenor House after his family – a custom of the times. 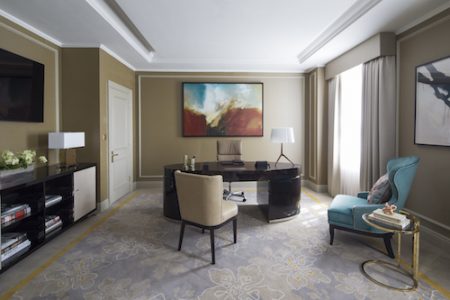 In 1927, Edwards began building work for a luxury hotel with apartments fronting Park Lane, employing architects L. Rome Guthrie and Sir Edwin Lutyens to carry out the development. Work was completed in just sixteen months, employing American construction methods to eliminate delay and inconvenience. The 472 room hotel opened in May 1929.

Grosvenor House even managed to deliver in World War ΙΙ; ten thousand sandbags and five miles of blackout material protected its stately presence. When the hotel first opened, what is now The Great Room was once an ice rink, and is in fact the only London hotel to have ever had one. In 1933, Princess Elizabeth, the future Queen Elizabeth ΙΙ, learned to skate at the hotel at just seven years of age.

Although having a strong Anglo-American connection, Grosvenor House has maintained its position as a quintessentially British hotel, continuing to entertain the aristocratic, the celebrated and the wealthy. 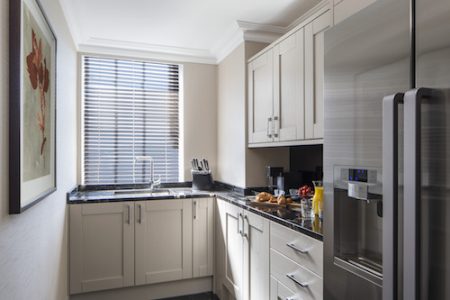 OW Hospitality manufacturers the highest quality Axminster woven and hand tufted hospitality carpet.  Headquartered in the UK with manufacturing, design services and sales offices in the United States, Dubai and Egypt, OW Hospitality is a full service, global player in the hospitality sector.

OW Hospitality has been in the hospitality industry for over four years, establishing the brand in 2011. The company has enjoyed tremendous growth and success in a short period of time by industry standards. While still a relatively new brand in hospitality, OW Hospitality has the financial backing and full support of its parent company and global flooring leader, the Oriental Weavers Group, who has been in operation since 1975. 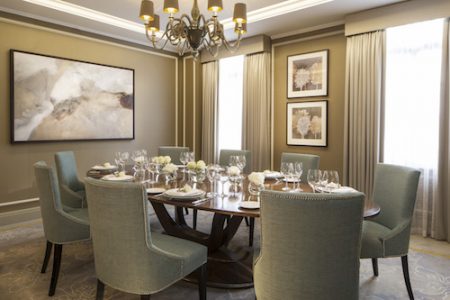 Over the years OW Hospitality has enjoyed working with the world’s top hotel chains, design firms and specifiers on countless projects over the years. Recently, OW Hospitality had the opportunity to provide carpet for both the Beaumont House Hotel and the Chiltern Firehouse properties in London as well as the freshly-completely Hilton Schiphol in Amsterdam. Even more recent was a project for the Grosvenor House.

“We were fortunate enough to design, produce and install all of the carpet for the Presidential Suite of the Grosvenor House, a JW Marriott hotel. This 5-star, historic property was exquisitely designed by GA Design and was purchased by Benjamin West. The carpet was Axminster woven from OWH’s special blend of wool/nylon (80%/20%, respectively.) 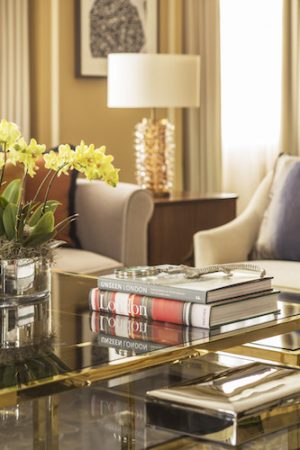 “The Grosvenor House has been one of London’s most sought-after hotels for generations. The property is synonymous with elegance and sophistication. To have the opportunity to work on this project was a dream come true and with powerhouses like GA Design and Benjamin West it made it that much more gratifying.”

“We’ve worked hard to establish ourselves in the marketplace and to exceed our customers’ expectations with everything we do, particularly from a pricing, lead time and service standpoint. No other manufacturer has the turnaround time that we do and that competitive advantage has afforded us the ability to work on some of the world’s most exciting hospitality projects.”