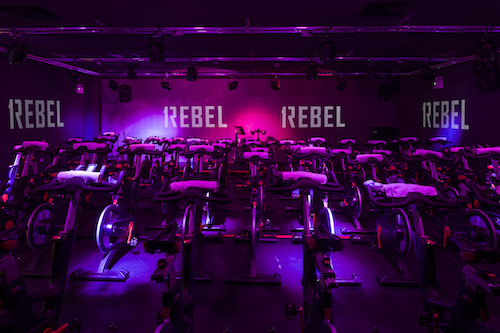 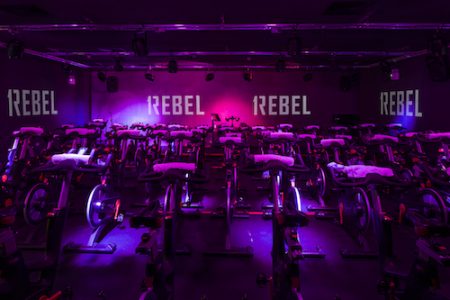 “Design a gym that doesn’t look like a gym for workouts that are more like a fun night out than physical exercise,” was the design brief for two revolutionary new 1Rebel luxury boutique London gyms – one at St Mary Axe and the other at Broadgate Circle, above Liverpool Street Station.

Both have been designed by Kyriakos Katsaros, Principal of Studio C102, with Admiral Construction Services as the main contractors at St Mary Axe, which opened in January 2015, and WFC worked on Broadgate Circle, which opened in September 2015.

“The founder’s vision was to have a new concept that bucks the industry standard of having membership fees and a contract that is hard to get out of, and the design brief was to break the mould and design something that doesn’t look like a gym. The idea of the design is to provide a fun experience which is more like having a night out than purely a means to achieve physical improvement,” said Kyriakos Katsaros.

“And because there is no contract and people pay on an attendance basis, it is essential that they enjoy themselves – because if they don’t then they won’t come back,” he added. 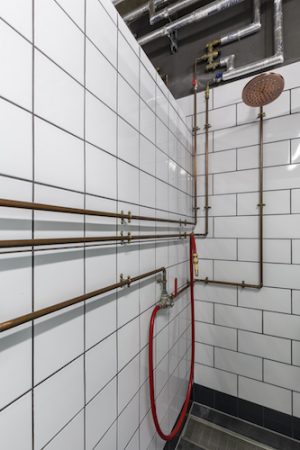 Originally conceived as an office, the building has been stripped down and reconfigured into a contemporary, industrial space which is balanced in luxury and theatrical glamour.

Studio C102 began by exposing the architectural elements of the building to reveal the concrete ceiling, ductwork and pipes. This unfinished look sits alongside reclaimed industrial light fittings from a communist-era Polish ceramics factory and a 1960’s German cargo ship, and is mixed with unembellished raw materials such as unsealed steel which over time will gain a rusty patina.

The shop front entrance to the gym stands at street level and leads into the reception area and retail zone, where luxury sportswear hangs from a bespoke Kee-Klamp clothes rail, which snakes its way from the ceiling to the floor.  A Roots & Bulbs juice bar, designed by k-studio is situated at the entrance. 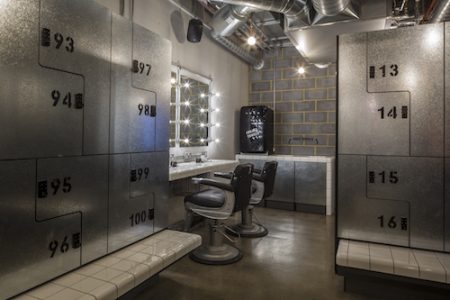 The floor’s uneven and velvety texture has been created by pouring the concrete on different days. In contrast, a long bench made from white handcrafted tiles runs along the left hand side of the room and provides discreet storage for cycling shoes.

Cinematic signs illuminate the entrance to the ‘Ride’ and ‘Reshape’ studios on the ground floor and basement. Sprayed stencilled signage has been used throughout the building, in keeping with the understated theme.

To mimic the layout of a theatre, a raised podium has been added in the ‘Ride’ studio, while the exercise bikes sit on three different levels facing the podium. Projections hit the walls to create the experience of a night out, with workouts being accompanied by music, sometimes from a live band that joins the fitness instructor on the podium.

The ‘Reshape’ studio in the basement features Georgian wired mirrors with steel frames and 1Rebel bespoke benches which contain weights, eliminating the need to pause during workout sessions. 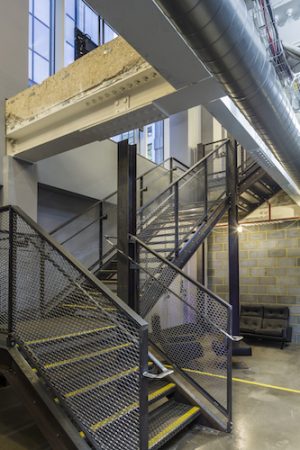 Located on the basement level of Broadgate Circle mixed use development above Liverpool Street Station is the next new 1Rebel venue.

The basement unit in which the venue has been created is a new shell, because the whole Broadgate Circle development was redeveloped by the landlord to create more of a leisure destination.

“As at St Mary Axe, the interior includes two studio gyms, which are basically theatrical-looking black boxes with theatre lighting. Other than these, the remaining concrete walls have been left exposed and as unembellished and raw as possible. Already within one of the two studios we had a fantastic circular concrete slab on the ceiling, which looks like a wheel with spokes, and obviously we have left this exposed,” said Kyriakos Katsaros.

“Other facilities include changing rooms, showers and toilets similar in design to those at St Mary Axe and with a number of luxury features. The main circulation, reception and lounge areas however, differ in that they are designed to reflect the more underground and ‘dark’ nature of the basement space – rather like going into an underground club rather than a gym,” he added.