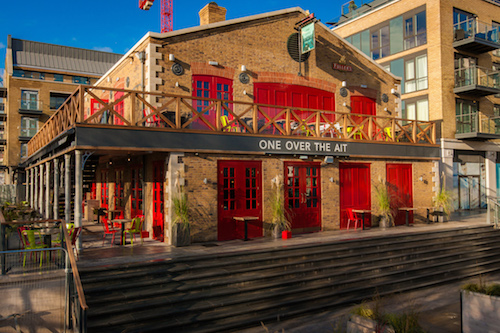 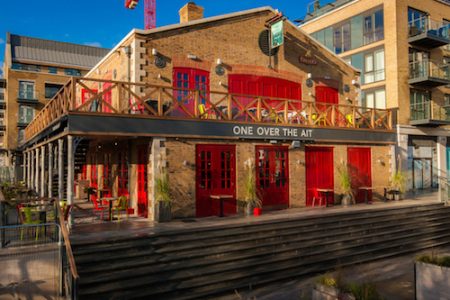 With 181 managed pubs and hotels and 205 tenanted pubs throughout London and the South East, brewers Fuller, Smith & Turner’s pubs are enjoying continuing success and ongoing expansion, with an offer based on outstanding cask ale, great wine, exemplary service and delicious fresh, home-cooked food.

Yet the real beauty of Fullers’ pubs isn’t in the traits they share – it’s in their unique character and individual charm. Fullers’ pubs include everything from historic listed buildings to buzzing modern bars and everything in between.

Fuller, Smith & Turner P.L.C is an independent, traditional family-owned London brewer, with a listing on the London Stock Exchange.

Founded in 1845, the company is based at the historic Griffin Brewery in Chiswick, London, where brewing has taken place continuously since 1654. 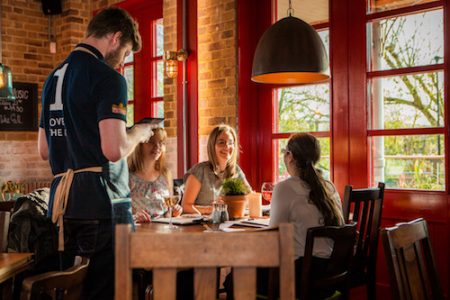 The company also has 641 boutique bedrooms in its managed estate and owns a 51% share of The Stable, a craft cider and pizza restaurant business. Fuller’s pub estate stretches from Brighton to Birmingham and from Portishead to the Greenwich Peninsula, including 168 locations within the M25.

As part of an ongoing programme of expansion and improvements, Fullers have recently introduced The Hydrant – a brand new pub in The City Of London right next to the iconic Monument to the Great Fire. The company has also recently carried out refurbishments at two of its pubs – One Over the Ait in Brentford and The Vaults in Southsea. 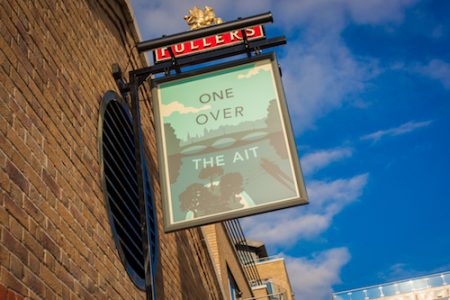 The Hydrant, which was formerly known as The Fine Line, has just burst onto The City scene having undergone a nine-week transformation that included the building of a brand new cellar to cater for the site’s improved craft beer range. On the two floors above, an extended upper gallery, more window-side tables and a private dining room are also new additions to the pub.

The new venue was designed by Simon Jones, creative director of Simple Simon Design, and fitted out by main contractors Shone, who carry out a large number of projects for Fullers.

Located near Pudding Lane where The Great Fire of London started, the design of The Hydrant draws inspiration from the history associated with this location.

For example, the interior design includes many imaginative features such as lights made out of fire hydrants and a fire hose which forms a handrail leading down stairs to the toilets. 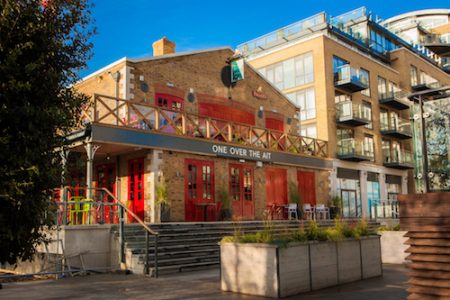 The interior was completely stripped out and a staircase leading to a mezzanine level was re-located to the front of the building to create a bigger bar area downstairs. A large lighting feature incorporating 54 bulbs was fitted over the staircase which is visible from the exterior through full height glazing. New seating has also been installed in a mixture of coffee table height, posers and seating booths.

Other works included the creation of a new bar downstairs and another new bar and private dining area complete with large TV upstairs, where new seating and dining areas were created to either side of the new bar.

Further works include the installation of high specification new toilets.

“The aim was to make the venue a much brighter, fun place with a big emphasis on craft beer and small plate dining,” said Simon Jones. 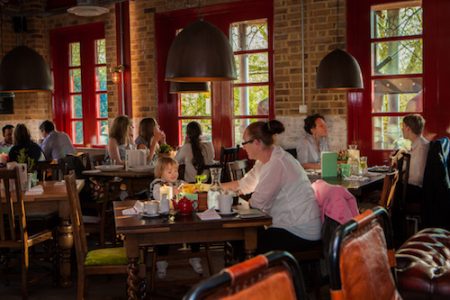 The food at the Hydrant is focused on making eating a very social occasion, with a mix of dishes, designed for sharing, using fresh, seasonal ingredients. The menu includes crispy buttermilk chicken, braised octopus and spiced monkfish, as well as a wide range of vegetarian options, such as roasted beetroot and chargrilled baby artichokes. 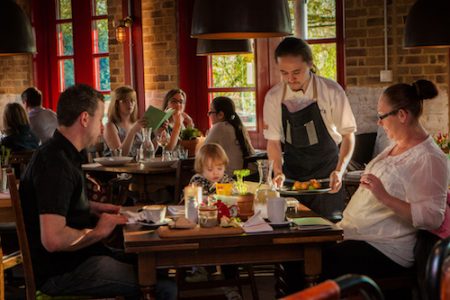 “This has been a great site for Fuller’s since we took it on in 1999, but the Hydrant really brings the pub up to date. It is an amazing scheme — we’ve gained extra space, a fantastic private dining room and the range of interesting craft beers, complementing the fantastic brands we brew in Chiswick, should set The City’s tastebuds tingling. Add to that a very interesting range of delicious food aimed at social dining, a great wine list and interesting cocktails, and we should be onto a winner.”

A stand-alone wharf-style two-storey brick building with a cellar, exterior seating and a first floor terrace, One Over the Ait has been impressively refurbished in a scheme shortlisted for the Restaurant and Bar Design Awards. The pub forms part of Kew Bridge West, an exclusive development of flats by St James’s. 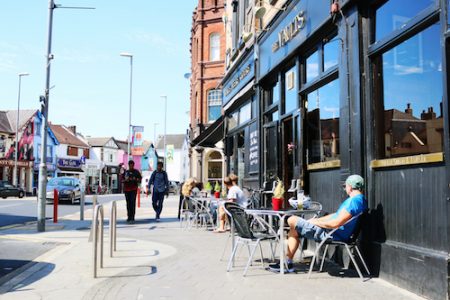 The new interior was also designed by Simon Jones of Simple Simon Design, and fitted out by Shone.

The design for the newly refurbished interior takes its cue from the industrial heritage of this part of the river Thames with extensive use of reclaimed materials.

“The idea of the design is to create a look which is quite fun and also relaxing, with soft lighting,” said Simon Jones. 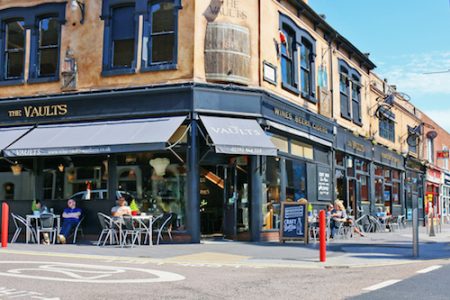 On the ground floor, the interior design features a large bar with a mixture of high and low level seating, including sofas and fixed seating booths, an open fireplace, a bespoke spiral staircase up to the next level and feature lighting, including lighting within a 15 ft rowing skiff suspended over the bar. The back bar design includes beer fonts made out of old radiator columns.

The second floor includes a smaller bar with overhead feature lighting made from distillery copper bowls. The bar overlooks a kitchen where diners can see their food being prepared through a glass window. 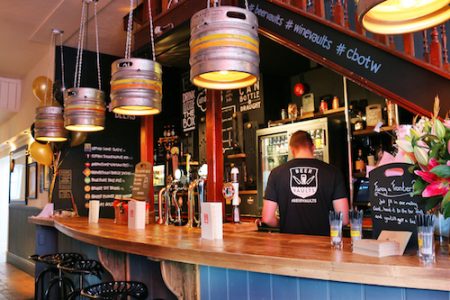 At the Vaults, a room which was originally part of the general interior area has been superbly transformed and given a brand new identity, becoming ‘The Beer Vaults’ – a whole new bar dedicated to craft lager beer with 11 beers on tap and even more in bottles and cans. A venue in its own right, The Beer Vaults will host a number of events, including tastings and food matching sessions, throughout the year.

Project main contractors were Somrow Construction, who were reported to “have done a very good job” with the interior design being carried out in-house by Andrew Durn, development manager of Fullers. The project was completed in August.

“The Vaults was originally two or three former shops which were joined together to make a public house with around seven rooms, including a restaurant, coffee shop, a lounge and  a traditional pub. 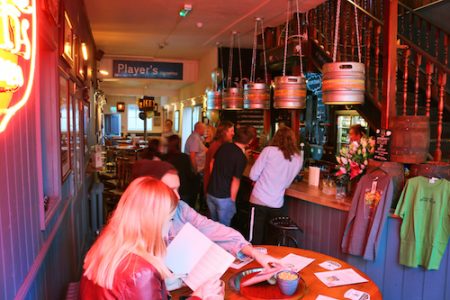 “We wanted to give one of the other rooms its own identity as a craft beer and lager bar and so created The Beer Vaults. The space was originally just a generic room with a bar in it and was similar to the rest of the pub.

“We installed bespoke lighting made from beer barrels and beer kegs and removed the original bric-a-brac and artwork featuring historic Portsmouth and Southend, and replaced this with artwork showing the brewing process, together with brewing artefacts such as old taps and hammers which were bolted to the walls. We also have some colourful eclectic pictures and old metal advertising signs promoting beer,” said Andrew Durn.

Further works included the refurbishment of the original bar, including the addition of a new curved bar front and top with an overhang, to enable customers to sit comfortably. The whole room was also completely re-decorated. 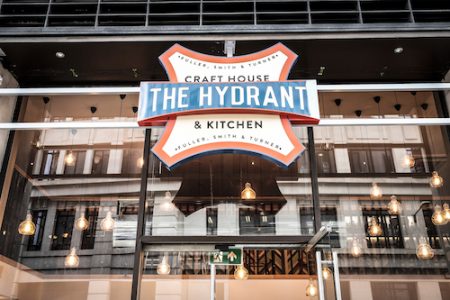 In addition, a new Beer Vaults logo was designed and incorporated on neon signage which is hung in the windows.

Andrew Durn concluded: “We were really pleased with the project and the customers love it too, with many customers migrating from other rooms to The Beer Vaults, which has become the new heart of the pub. Somrow Construction did a very good job.”

“It’s really exciting being part of a new phase of The Vaults story. There are also lots of opportunities to sample new dishes from our team of highly qualified chefs, using the very best in local ingredients, to create some of the most intriguing beer and food matching combinations.” 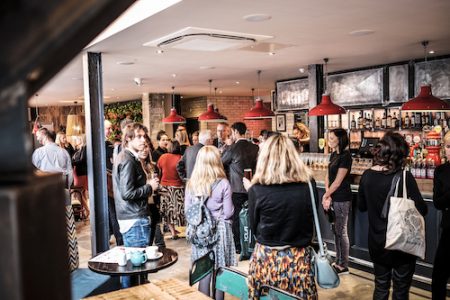 Specialising in hospitality interiors, Simple Simon Design work on projects focused on bars, restaurants, pubs and hotels. Having been in operation for 12 years, they have built an extensive portfolio covering a range of various developments, showcasing their talented team.

Simple Simon Design boast a wide range of clients from larger groups such as Fullers and Nandos to smaller emerging groups including Mission Burrito and Grillstock. The company also work with many independent establishments and start ups.

The leading designer company is one that Fullers often use, amongst others. Simple Simon Design has been collaborating with Fullers for three years now and has collectively covered several projects. 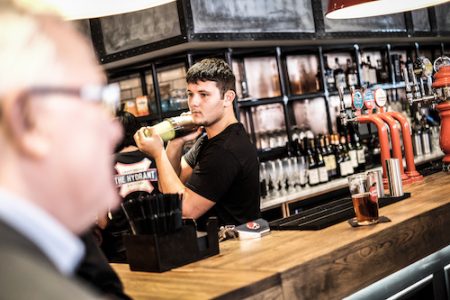 Premier Hospitality managed to get in touch with Simon Jones, Managing Director of Simple Simon Design, to obtain some key information. Simon commented:

“Fullers are a great company to work for; it’s a real family business. As a client they are always looking forward with new exciting ways to provide the customer with the best possible experience.

“As a company we pride ourselves on being creative with budgets – squeezing the most out of a space to give the biggest bang for the buck – but ultimately creating spaces that people feel comfortable in.”