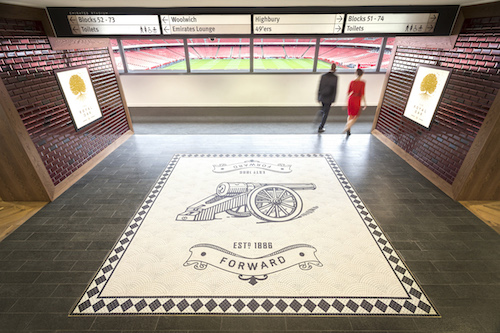 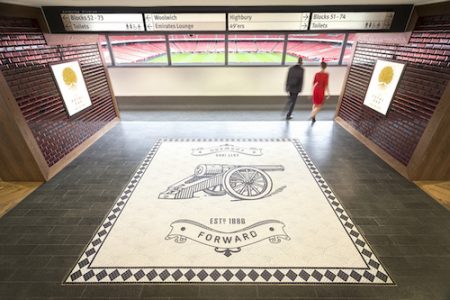 The Royal Oak hospitality space at Arsenal Football Club has seen a brand new refurbishment, inspired by the heritage of the club.

The hospitality space was launched at the start of the 2015 season, and accommodates about 2,000 match day guests, marking a radical transformation of the former space.

Situated at the North Bank end of the stadium, the large hospitality space is laid out across one level, featuring two bars – one at either end. Already existing as The Royal Oak, the space was named after the pub in Woolwich where 15 founding members of the Woolwich Armoury met and decided to set up a football club in 1886, which they eventually named The Royal Arsenal.

The significance of the name and history of the football club and its founders is embodied throughout the space. The team involved even collaborated with Carlsberg to create a unique and very apt lager named ‘The Founders’! 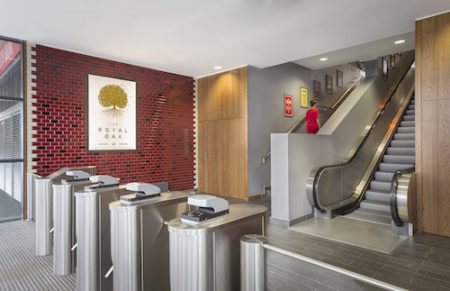 Strategic design business 20.20 played a key part in the project, developing the design of the space and incorporating storytelling elements that matched the brief to produce something unique to Arsenal F.C. Having been in operation for 27 years within the retail and leisure sector, 20.20 have been working with stadiums and sports facilities for the past 15 years, with previous projects at Manchester City, Liverpool Football Club and Ascot Race Course.

In order to find out some more on the refurbishments, Premier Hospitality caught up with Jon Lee, Creative Director, and Sarah Hindmarsh, Head of 3D, at 2020 to find out more.

“We have been working very closely with Arsenal F.C. for a number of years on the Arsenalisation of the Emirates Stadium. The Royal Oak existed as a space but there was a desire to create a more unique and social gathering place for fans that would embody the spirit of the club. The Royal Oak is an important Pub in Arsenal’s history and so we wanted to reflect the traditional treatments of Victorian Pubs with a forward thinking attitude that allows the environment to be timeless.” 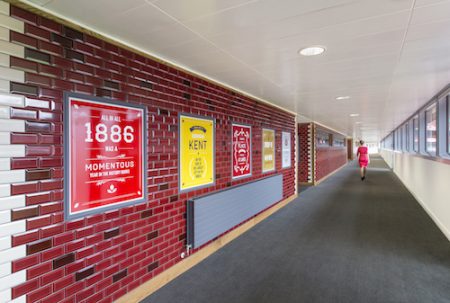 Handcrafted tiles provide a modern take on a Victorian setting, with the space boasting a stylish Corrian bar embellished with a brass top, corresponding with the brass detailing around the room. The design team have taken cues from traditional pubs – such as etched mirrors, chalkboard and even a last orders bell – and placed them into The Royal Oak.

Portview acted as main contractor, cooperating with 20.20 to produce a spectacular finished product. Most of the furniture is made by British manufacturers that help to give the area a new lease of life. 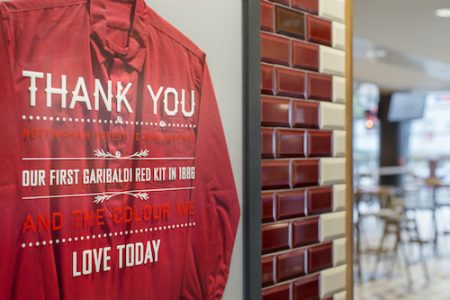 “Although we have made it look and feel like a pub, we have respected the fact that it is also in a stadium. We tried to balance the scale of the stadium with the intimacy of a pub. When you come through the entrance one of the things you see first is a stunning handmade mosaic on the floor, one of our wow features.

“In the space we have tried to create distinct zones. Whether it’s in a booth with a group of friends or on the high tables that are in the bar, it helps to encourage people to socialise pre and post game. Similarly in the big atrium spaces, we have designed areas with soft seating, and a large social area where guests can watch the big screen surrounded by atmosphere.”

With a good quality food offering on the menu, The Royal Oak intends to keep all guests happy with traditional dishes such as fish and chips, in addition to a number of meaty choices from The Grill. Guests have the chance to handily pre-order food and drinks that they can collect at half time if they wish. 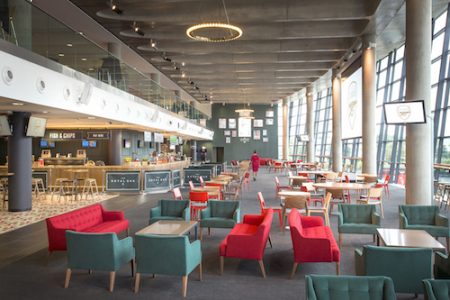 “It is a great progression for the new stadium to be able to deliver an environment that connects with the fans; it brings the history of the club closer to them. Far too many hospitality spaces don’t resonate with fans, giving them a vanilla experience, but this space reflects what Arsenal Football Club is about and you can hear it from the fans that they really engage and connect with it. We have a long relationship with Arsenal Football club and the trust between the team makes it a very collaborative effort between client, agency, catering, project manager, QS and contractor. This allows us to deliver unique, high quality spaces that the fans can look forward to using.”