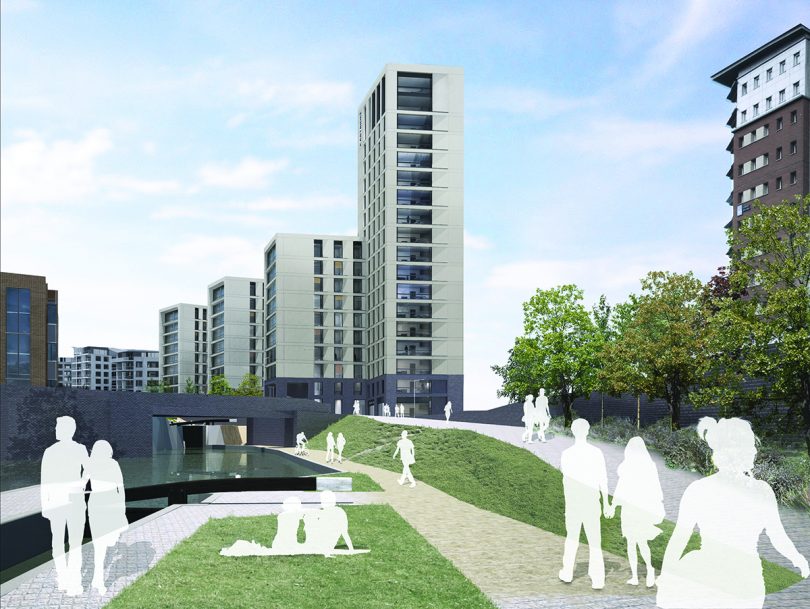 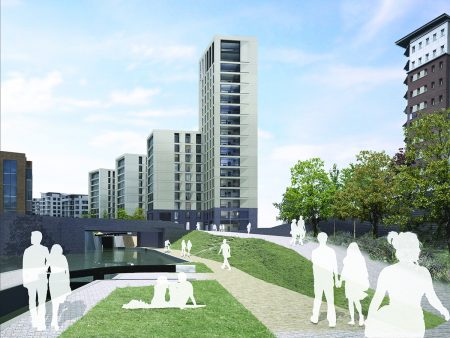 One of the most prominent regeneration projects in Birmingham, is the £48m canal side high quality student accommodation scheme at Eastside Locks – the site of the new Birmingham City University (BCU) City Centre Campus.

The project is being carried out for Alumno Developments by main contractors John Sisk & Son. Architects are Glen Howells Architects; structural engineers are BWB Consulting and quantity surveyors are DBK.

The project forms part of the redevelopment of Birmingham’s Eastside district which also includes the Parkside Building and Eastside City Park.
The scheme to construct 21,405m² of student accommodation is in line with Birmingham Council’s policy to continue Birmingham’s growth as a leading academic centre, and is part of its vision to create a Learning Quarter in the heart of the city.

Following the shape of the canal side, the student accommodation comprises several buildings of varying heights, which have been designed to form a crescent. The strong and honest materials palette emphasises the importance of reflecting the canal-side heritage.

The buildings will provide accommodation for over 670 students, featuring both en suite and non-en suite rooms, with several offering wheelchair access.

The rooms will be arranged in clusters and provide views of the newly developed City Park and city centre skyline. There will also be communal leisure and study areas for students within cluster flats with a shared kitchen/lounge. In addition, a pair of elevated courtyards to the west side of the scheme will form a natural break-out area and a hub for social activity. A single central reception will provide secure access and a significant arrival point.

Compatible with Birmingham Council’s preference for mixed-use developments, the ground floor of the building has been dedicated to graduate business start-up or incubation units, with the aim of providing affordable office and studio space. A small shop has also been incorporated, for use by resident students, businesses and local people. 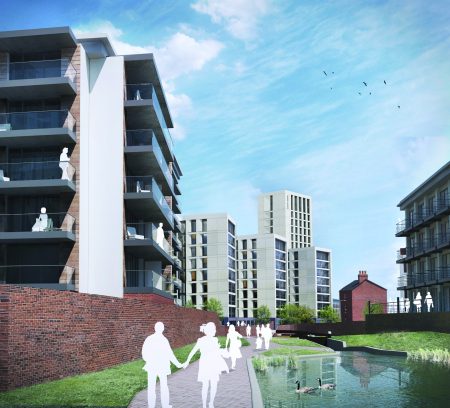 The scheme will have private west-facing courtyards overlooking the canal, as well as public realm areas and a giant cycle parking area.
David Campbell, managing director of Alumno Developments, who specialise in constructing student accommodation, said: “The Eastside Locks scheme is within Birmingham’s major regeneration area, which is the largest regeneration scheme after Stratford, East London.
“The site is on the Grand Union Canal on the new Birmingham City University campus, two buildings of which have been opened, with the remaining two being developed.
“Our accommodation is in the right place at the right time, given that are literally now part of the exciting new BCU campus. The scheme will provide 670 rooms which the university have taken on a long term agreement, as well as providing units for graduate startup businesses on the ground floor and a retail unit.
“Alumno strive to be a good neighbour and seek to add value to the wider community agenda. City locks is a major and important milestone for alumno and as you are only as good as your last project – we are determined to do a good job and make a positive contribution to the significant reinvention in this part of the city.
“We are gaining the most satisfaction from the ‘value added aspects’ we are bringing to the table – both in terms of providing complimentary uses and adding character to the building by giving it an individual identity and a welcoming feel, rather than simply it simply being a ‘box’ with a series of rooms inside.
“This means that when the students move in, they will hopefully feel that they are living somewhere quite special, a new and vibrant community with happy tenants and happy stakeholders.”

Work commenced on site in February 2015, with completion due in late summer 2016.