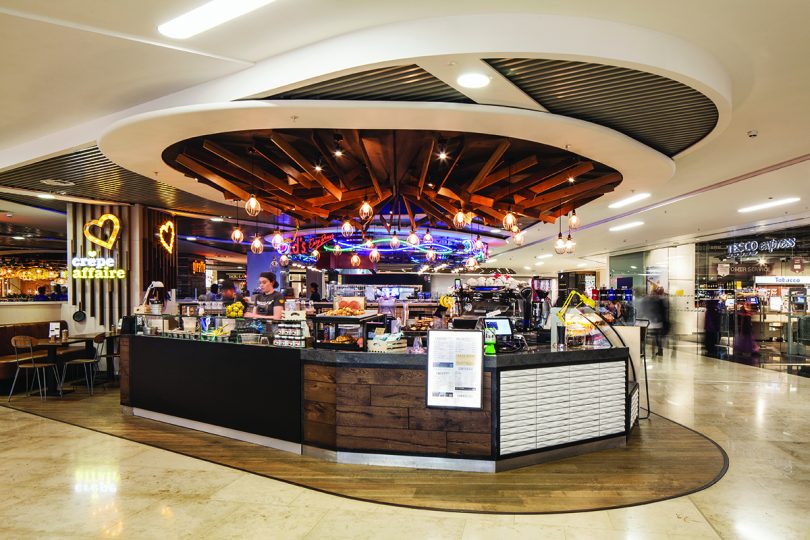 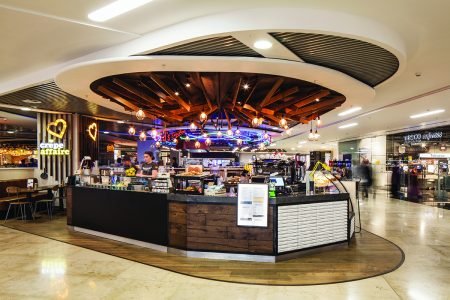 Crepeaffaire – the popular dessert store dedicated to delicious crepes – has revealed a new site at Birmingham’s Grand Central. Freshly prepared crepes and other tasty treats are on offer at the store, and guests can take a seat to relax whilst they indulge in a well deserved delight.

The first store opened in 2004, and ever since then new sites have popped up in various locations including exciting spots in London, and beyond.
Premier Hospitality caught up with Steven Wragg, Associate at DesignLSM, to discover some key information on the new addition to Grand Central Birmingham. Steven told us:
“The design work began just before Christmas 2014 and opened September 2015. Crepeaffaire was already an existing brand that we developed further with our design work, they already have several successful sites around the UK and this one has just enhanced the brand further. The development was in the region of £85,000 for fit out.
“There is a central kiosk counter which customers move around, and various types of modern seating such as poseur height seating, dining height seating, loose chairs and a banquette. A central ceiling feature hangs over the counter which encompasses different types of lighting suspended within that, to create a timber sculpture.
“The counter is designed to look like individual units so each angled section of the counter face displays various finishes. There is also substantial seating in the store for people who wish to sit down and enjoy their dessert, rather than taking it away with them.”

Stylish timber flooring and contemporary Corian counter tops feature in the store, and the counter fascias present a mixture of corrugated steel and reclaimed timber. Clean lines have been created with white tiling and the use of concrete effect panels, with perimeter walls covered in concrete and feature timber panel details as well.

Sweet crepes available to customers include the delectable cinnamon crepe, a divine Nutella crepe and a luxurious Grand Marnier option. For those who wish to try a savoury crepe, the menu offers an innovative Margherita style, an appetising apple and goat cheese crepe, and luscious smoked salmon and cream cheese crepe served with chives.

Coffees at Crepeaffaire are created with a double espresso shot unless preferred otherwise, and all coffees in-store are fair trade organic. Milkshakes are made with ice-cream for a texture and taste like no other, and there is a variety of other drinks available, such as frappes, smoothies and other soft drinks. 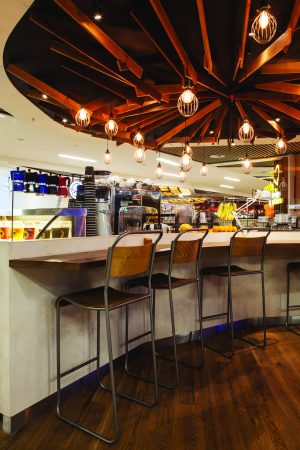 Breakfast options are on offer to customers, and dishes are even served with free tea or coffee before 11.30am. A delicious all-day breakfast is on the menu, in addition to eggs Benedict, eggs Florentine, maple bacon and porridge. Merry Berry includes seasonal berries, honey, fresh mint and yoghurt for something lighter.

Steven added:
“It is wonderful that we had the opportunity to get involved with such a large project, despite it being quite challenging.
“Our biggest challenge was probably working with the landlords when everyone is trying to get on site at the same time and we had to get everything approved, it was quite difficult at times – but we got there in the end!
“Crepeaffaire has received really good feedback from what we have heard and it has been very busy – in fact Grand Central Birmingham in general has been really busy with all the new units having opened in September – queuing systems even had to be used for people to get in on the opening day!

DesignLSM have been in operation for just over 25 years, and have a portfolio that boasts a wealth of various projects, from restaurants and hotels to offices and bars, and even retail stores such as Lacoste. The design practice has worked on small coffee shops and kiosks, right up to large scale hotels.

Chantelle Lighting has been designing and manufacturing bespoke light fittings for the hospitality industry for over 25 years. The company boasts a team of highly skilled, artisan craftsmen and women who use their expertise to create jaw-dropping lighting for hotels, bars, restaurants and many other commercial and domestic locations.

In addition to their involvements with CrepeAffaire, Chantelle Lighting has also completed work for some of the largest brands in the UK. Designers and architects choose to work with the Chantelle because of its unrivalled experience working in the hospitality industry.

Premier Hospitality caught up with Anthony Holly, Managing Director of Chantelle Lighting, to ask a few questions about the company and its project with CrepeAffaire.

“We had been lucky enough to work with the designers Design LSM previously, so we were thrilled when they approached us regarding the light fittings in CrepeAffaire,” Anthony told us.
“Chantelle created black, metal, theatre style spotlights, which are very on trend and look great in situ. The lights reflect the fun and modern feel to the popular food haunt; I’m really pleased with the end result; they complement the interiors brilliantly.
“The fittings point directly towards staff members behind the counter, and I think this is a great play on the theatre aspect, suggesting that all eyes are on the wonderful food being prepared.”