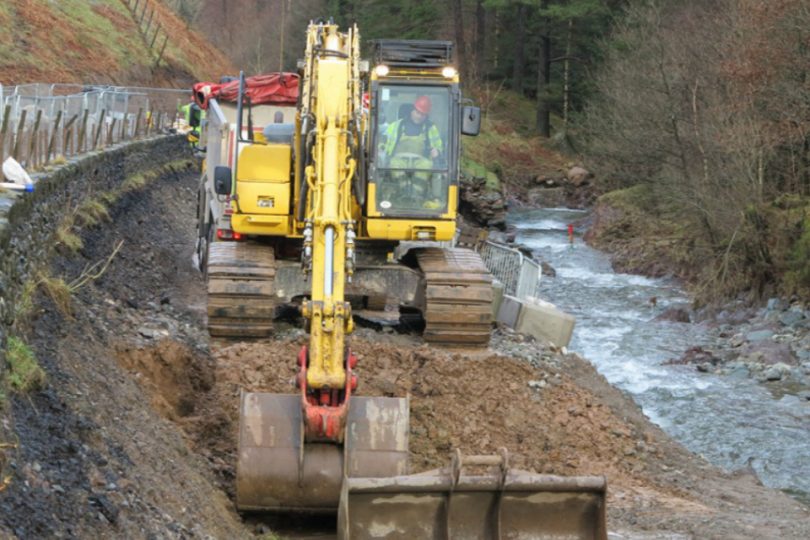 Construction work has started to repair the A591 in Cumbria damaged by December’s storms.

Highways England has been brought in by the government to restore the road, to enable it to be reopened by the end of May. Last month, Kier Highways was appointed as the main contractor for the project to rebuild the A591 at Dunmail Raise, which was washed away in the storms.

A 22 tonne excavator is among the equipment being used on the site, and construction work has started on a new concrete retaining wall in the beck at the side of the collapsed part of the A591.

The government has made £40 million available to help repair roads and bridges in Cumbria and Lancashire, including the A591.

The vital Lake District tourist route, which stretches between Grasmere and Keswick, has been closed between St Johns in the Vale and Dunmail Raise since December following significant damage caused by storms Desmond and Eva.

Transport Secretary Patrick McLoughlin said: “We are determined to reopen the A591 as soon as possible, and I am pleased the people of Cumbria can see we are making progress.

“Tourism is a vital part of the local economy, so fixing this road will make a real difference to the region.”

Communities Secretary Greg Clark said: “We’re determined to stand squarely behind communities whose lives were turned upside down by the recent floods – including getting key infrastructure back up and running.

“That’s why we’re pulling out all the stops to get the A591 fixed so Cumbria’s main road can be open for business in time for the Summer holiday season, for the benefit both of tourists and of local residents.”

Preparatory work and some preliminary construction work has already been taking place at Dunmail Raise.

Once the new concrete retaining wall has been built in the beck, the gap in the road caused by the storm damage will be backfilled with crushed stone before a new road surface is laid on top. A new wall will also be constructed using local stone in front of the retaining wall.

Andy Withington, Highways England’s Asset Delivery Manager for the North West, said: “We are acutely aware of the need to get the A591 north of Grasmere open again as soon as possible, and I would like to reassure local communities and businesses that the main construction work is now beginning.

“Preparatory work and some preliminary construction work are already underway, and we are starting work this week to reconstruct the collapsed part of the road at Dunmail Raise.

“We will continue to work closely with Kier Highways, Cumbria County Council and its contractors to do all we can to get the A591 repaired and re-opened.”

Work on the second section of damaged road further north is also underway. A helicopter survey is due to take place shortly, which will provide detailed technical information about the stability of the scree slopes adjacent to the A591.

Other survey information is also being used to identify what repairs are required to storm drains, bridges and the road surface so that the A591 can fully reopen by the end of May.

Drivers, businesses and local residents can stay up to date by visiting the scheme website, where they can also sign up to receive email updates about how the project is progressing.