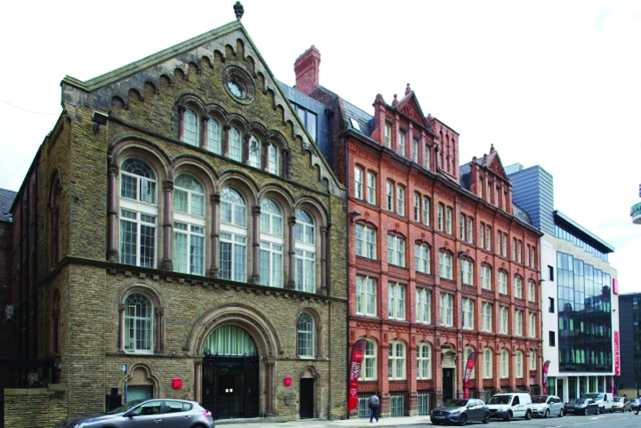 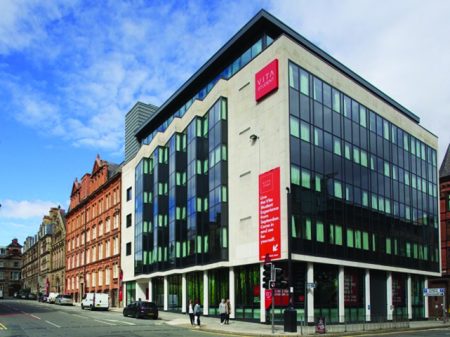 Named as one of the UK’s top 10 most luxurious halls of residences last year, the three-phase Vita Student development in Liverpool is helping to redefine expectations when it comes to student accommodation.

The scheme has also helped to revitalise part of Liverpool city centre, by bringing back into use three vacant buildings, including two which are Grade II listed, for developer Select Property. Not only did contractor Russells Construction give these buildings a second chance, the team’s skill and attention to detail has been hailed by both the client and the city’s conservation officer.

The 120,000 sq ft, £28m scheme in Crosshall Street was completed over a three-year programme. The trio of projects presented an extremely complex technical challenge in order to create 358 high specification studio apartments across the three buildings, plus communal areas, a gym and bike store.

Vacant for six years prior to Vita Student’s acquisition, the Grade II-listed Victoria Chapel and its neighbour the 1879 Crosshall buildings were in an extremely bad state of repair and considered at risk. Planning permission was given with a number of conditions including retention of the historic facades. The Russells team, along with its specialist subcontractors, devised a series of solutions to preserve the front faces of the buildings while creating a modern residential complex.

Director Andrew Russell said: “We knew from the very first meeting what a complex project this would be, but I was confident in the experience of the team and the subcontractors we work with that we could rise to the challenge. Russells has completed several heritage restoration projects over the years, though none with buildings as far gone as these. In conjunction with our structural engineers and the architect – BDI Structural Solutions and Neil Collins Homes – we developed independent solutions for each phase of the project. It was enormously satisfying to see each phase nearing completion with the fantastic internal finish surpassed only by the incredible external restoration the team achieved.
“It’s not overstating anything to say this scheme has rejuvenated this part of the city thanks to Vita Student’s foresight and investment. These were empty, tired and derelict buildings, which are now amazing new homes, creating a thriving neighbourhood with hundreds of students bringing a new buzz to the local area.” 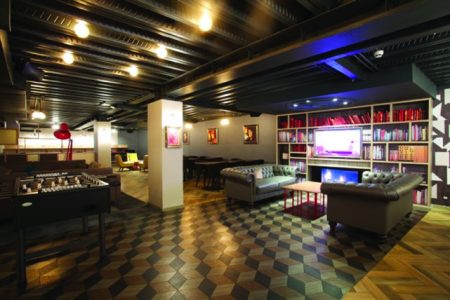 The Grade II-listed Gothic Chapel, constructed between 1878 and 1880, was virtually derelict. While the masonry walls and façade were stable, any exposed timber was in bad shape, with much of the roof rotten. Russells installed a RMD Quickform internal bracing system to hold up the façade while the inside of the building was demolished. New foundations were piled to support a new internal structural steel frame which was was erected complete with profiled, steel decked, in-situ concrete floors. Each individual apartment was then formed with traditional stud partitions walls, and fitted out using client-sourced fixtures and fittings.

The contractor retained an existing internal staircase at the rear of the building and re-built the collapsed timber roof, reusing some of the reclaimed timbers as common beams, and re-tiled it in Welsh slate. All cast-iron rainwater goods were replaced with high quality replicas, while the front façade was also cleaned and repointed. All the original windows were removed, repaired, cleaned, repainted and reinstalled. Where new windows were added, they were done in the style and materials of the originals.

Liverpool City Council Conservation officer Chris Griffiths said: “Now, externally, it looks it it would have originally. The result is highly sympathetic to the character of the original building. The windows were very well repaired, and the use of the original fabric has been very impressive.”

The most modern of the three buildings, Tinlings was a tired 1960s office block which was to house 132 bedrooms and a series of basement-level communal areas. A full internal strip-out took the building back to the existing concrete frame, which was retained and utilised where feasible. An internal light well was created by removing some of the concrete floor and an additional structural steel frame added to the original concrete roof in a vertical extension to form the space for further accommodation on levels 5 and 6. Externally, Russells installed a new glazed curtain walling system to all three facades. The existing Ashlar Portland Stone façade cladding was retained, repaired and cleaned and replaced where required.
A water management system was installed to both the lower floor and basement levels including a modern ground water pumping system. Two lifts, including a fire fighting lift, were installed as well as refurbishment to the existing staircases. The ground floor was prepared to ‘shell’ spec for letting as a retail space. The basement level was refurbished to create the Vita ‘HUB’ area, a communal space comprising group study rooms, movie room, lounge area and laundry facilities.
Crosshall

Built alongside the Chapel in 1879, the Crosshall building was a particularly complicated build, the project involved retention of the façade in a similar way to the Chapel, though Russells employed a different system this time. Refurbishing the dilapidated and decaying structure involved a painstakingly careful internal structural demolition, to leave only the external front and rear façades. An external scaffold retention system was employed until the light gauge metal frame internal structure was completed, which was then tied into the facades

Several specialist trades and a team of craftsmen – including lead workers, roof tilers, stone masons and metal workers – were enlisted to return the facades to their former glory. This involved replicating cast iron railings at the front of the building; replicating the mansard roof in Welsh slate; removing and repairing all salvageable period hardwood windows, restoring and re-installing these on site. 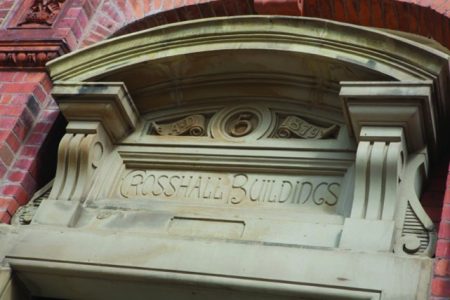 During the project, it was discovered the two terracotta gables on the front façade were unstable, so they were removed piece by piece, labelled, cleaned, repaired – or replaced with newly moulded terracotta – and reassembled in situ.

Conservation officer Chris Griffiths worked with the team to ensure the building was protected.
He said: “It was a real mess, with many sash windows crudely altered in the past, heavily compromised by rainwater and embedded vegetation. The layout didn’t lend itself to the new use, so everything was removed.
“The main challenge was retaining the massive façades with their large gables and decorative features. Once the internal structure and roof support was removed, the gables were too unstable and the contractor dismantled them for safety and to maintain stability of the facades below. You can’t tell it has been taken down and rebuilt, it’s a great job.
“Brickwork was cleaned and repointed, and not over cleaned which can leave it looking too new. The iron railings at ground floor level were repaired and reused or replaced, it’s hard to tell which are the original and which are new. The external repair and refurbishment is of a very high quality.”
Mark Oakes, chief commercial officer of Select Property Group said: “Working with Russells was a very positive experience. The planning and execution of this complex scheme was extremely professional and the communication from the team was excellent.
“The ability of the contractor to retain so much of the original character of the buildings, while creating 358 contemporary studio apartments and luxury common areas, was remarkable. Watching the build process in action was nerve wracking at times but the Russells team provided constant updates and reassurance, and delivered an excellent product to time, to budget and to the satisfaction of all involved.”
Russells Construction is one of the North West’s most recognisable and fastest growing construction companies, making a name for itself by delivering large and high profile schemes across all sectors. The last 12 months has seen the business break £64m turnover and is expecting to see an uplift again in the coming year to approximately £70m.