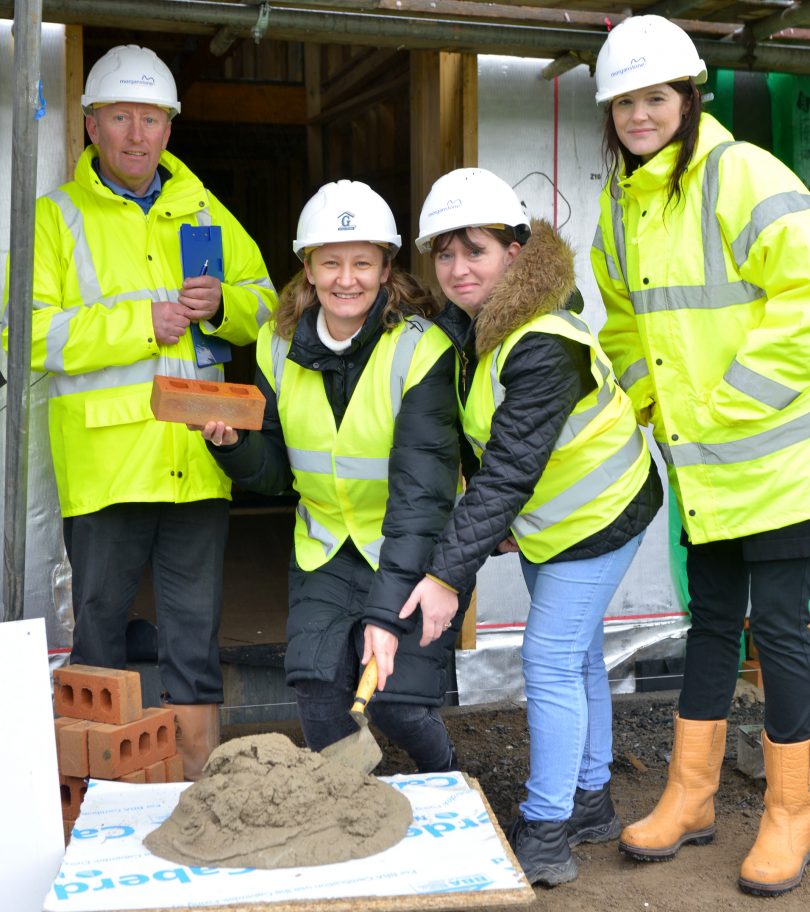 Members of the Old Oak Housing Co-operative in Johnstown, Carmarthen, were given the opportunity by developers Morganstone to lay the first bricks for their new homes.

Not for profit housing and social care provider Gwalia is working in partnership with Carmarthenshire Council and the Wales Co-operative Centre to deliver one of three Welsh Government housing co-operative pilots.

Housing co-operatives are people who live in and collectively manage their accommodation – from shared houses, to blocks of flats, to entire housing estates. This can involve taking responsibility for arranging repairs, making decisions about rent and who joins or leaves the co-operative. Contractors Morganstone have started to build the 27, two, three and four bedroom homes on land off Heol Dyfnallt in Carmarthen.

Gwalia’s Community Development officer Vicky Watts has been working closely with members, Carmarthenshire County Council and the Wales Co-operative Centre to ensure that each and every member has been involved in the decision making process during the past eighteen months.

She said: “It has been a pleasure to work with a group of people who are so keen to take responsibility for managing their own homes. I look forward to working further with the members and to seeing them move into their own homes.”

Andrew Vye, Gwalia’s Director of Housing and Support, said the members are the key to making the housing a co-operative a success.

“It is clear that co-operative housing has an important role to play in increasing the provision of affordable housing and creating safe and democratic communities,” he said. “The Old Oak development demonstrates how involving the community from the very beginning of a project that we are building the homes that people want.

“Members have been involved every step of the way. They’ve named the development and had input on the fixtures and fittings for their new homes. The homes may not yet have been built but the Old Oak is already a close-knit community of people.

“Gwalia are delighted to have been given the opportunity to have been involved in such an important housing pilot.”

The initiative officially became a physical reality when cooperative members cut the turf to kick-start the development on Monday 28th September.

“This year has been amazing. First I started a new job and now I have the opportunity to move into a brand new home. I can’t wait to move in – I feel like I have won the lottery.”

David Palmer, Manager at Wales Co-operative Centre, said that once the development is complete the Old Oak co-op members will continue to take decisions themselves about Old Oak, deciding themselves how the properties are managed.

Managing Director of Morganstone Ian Morgan said: “Morganstone are proud to be working in partnership on such a unique project with Gwalia and the Wales Co-operative Centre. The laying of the first bricks by the founder members is a key milestone for the project not only for our company but also for the housing co-operative, Gwalia and the key stakeholders.”