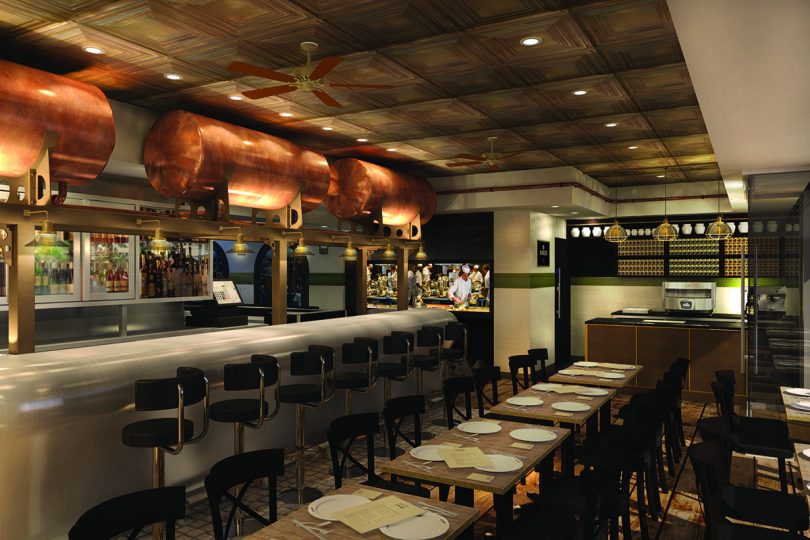 Michelin starred Galvin Restaurants are making a great start to the new year, with the launch of Galvin HOP taking place on 25th January. Galvin HOP – a Pub de Luxe on what is presently the site of Galvin Café A Vin in Spitalfields Market – will become the flagship London pub for the recently created Galvin Pub Co. Excitingly, their second pub, Green Man in Chelmsford will be opening in summer this year.

The menu at HOP will also bring pub dishes prepared with seasonal ingredients that are cooked combining the perfect balance of classic and contemporary techniques. Designed by brothers Chris and Jeff Galvin, the menu will include meat and fish from their award-winning suppliers with delectable dishes such as slow cooked beef cheeks in stout and caramelised carrots, Galvin cured smoked salmon with soda bread, charred beetroot and goats curd salad and green clementine trifle.

HOP will also introduce the ‘Luxe Dog’, a range of gourmet hot dogs available to eat in or take-away with Maille’s finest, seasonal mustard served fresh from the pump. Breakfast items, including egg & bacon rolls, toasted muffins and Eccles cakes will also be available to take-away.
Four large copper tanks containing unpasteurised Pilsner Urquell are set to be one of the most striking elements within the space, three of which will be positioned above the bar. HOP will also have several various bottled and canned craft beers available, in addition to a boutique selection of wines on tap installed, supplied and maintained by OW Loeb & Co.

Other notable aesthetic changes will appear within the space, following improvements on the Galvin Café A Vin site, such as brand new flooring and the installation of tiled walls – classic pub designs however in a modern environment. Injecting a sense of theatre and fun is the kitchen which will be semi-open, and an attractive front terrace will accommodate for outdoor seating. 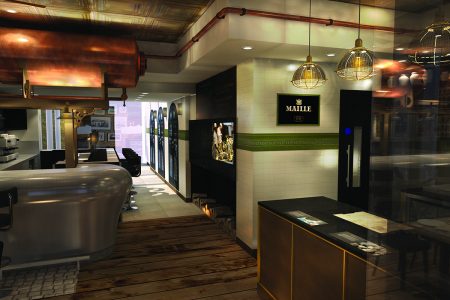 Chris Galvin worked alongside esteemed celebrity chef Antony Worrall Thompson at The Ritz Hotel and at L’Escargot prior to joining Conran Restaurants, where he worked directly with Sir Terence Conran for 10 years, opening a number of restaurants including the Orrery, which saw him achieve a coveted Michelin star in 2000.

During 2003, Chris was appointed by Jeremy King and Chris Corbin to open the much-acclaimed Wolseley. Chris joined forces with his brother Jeff in 2005 and together, subsequently they opened Galvin Bistrot de Luxe, Galvin at Windows, Galvin La Chapelle and Café A Vin, Galvin Demoiselle in Harrods, and Galvin Brasserie de Luxe and The Pompadour by Galvin in Edinburgh.

Inspired by his older brother Chris, Jeff began his career at the very same small neighbourhood restaurant where Chris once washed the pots for Antony Worrall Thompson. Jeff joined The Savoy hotel as a young Commis under the direction of Anton Edelman before progressing to the role of Junior Sous Chef at David Levin’s Michelin-starred Capital Hotel, working for renowned Chef Philip Britten. In 1994 he was appointed Sous Chef by Nico Ladenis at Chez Nico at 90 Park Lane and a part of the team that achieved the prized third Michelin star.

In 1997 Jeff joined Chris for the opening of Orrery in Marylebone before being reunited with David Levin as Head Chef at The Greenhouse restaurant in elite Mayfair. His Michelin-starred experience led to his appointment at Marco Pierre White’s three Michelin-starred Oak Room, where he was Head Chef under the direction of Robert Reid, and in May 2000 Marco appointed him as Executive Chef at L’Escargot, which admirably held a Michelin star for five years.