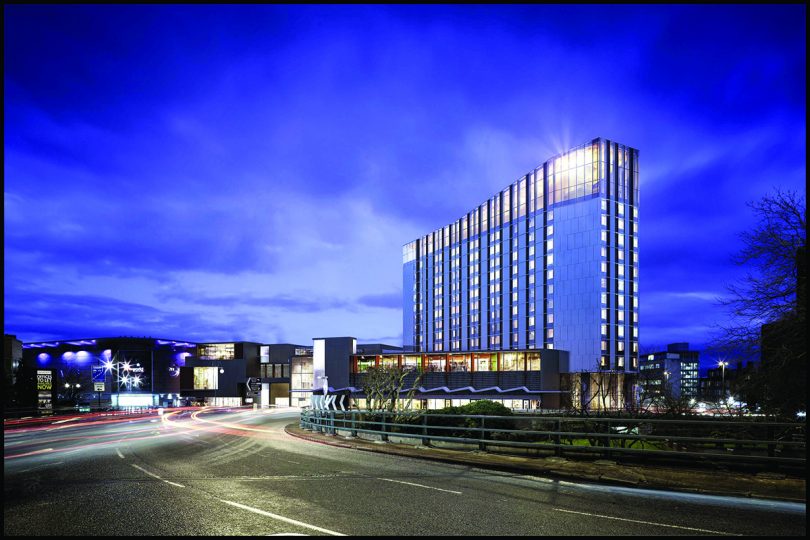 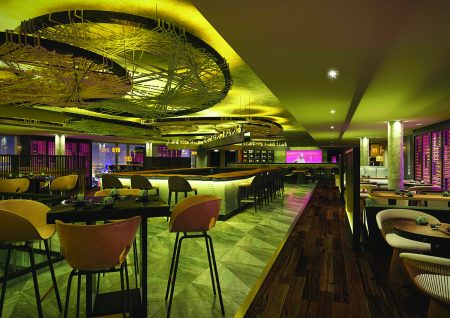 The four star hotel will be located in the former Auchinleck house building on Broad Street, which received a £50 million renovation to transform it into a modern silver-clad hotel offering 253 deluxe rooms, two junior suites and the largest presidential suite in Birmingham.

The development has seen an existing 12 storey office tower, which stood above a retail parade with various shops, transformed into what will be a hotel that boasts the best views from across the city from its newly built 16th floor sky bar.

Andy Robinson, Managing Director of Colmore Tang Construction, which has worked on the re-development said:

“This was a conversion of an existing building so it was a 12 storey office tower that stood above a retail parade with various shops and also had an old plaza and shopping unti adjacent to it. The whole site is about 2.7 acres so we bought it originally as an oppourtunity and because the StayWell Hospitality Group and Park Regis wanted to put a European flag in the ground and because Seven Capital is based in Birmingham largely, it was a great oppourtunity to buy an exisiting building that is in a very well known and prmoinent location.

“65,000 vehicles  a day go around Five Ways roundabout so it had great prominance in that respect on one of the main arterial roads west of the city that many people come in and out of.”

Now reaching 16 storeys, positioned as a hotel for both leisure and business travelers, Park Regis Birmingham will house an à la carte restaurant, all-glass Sake Bar and Pan Asian Fusion resturant on the 16th floor, as well as an exclusive level complete with conference and meeting spaces, a business lounge with executive check in facilities, spa and gym.

Andy added: “Guests will enter off of Broad Street and come up two lifts or staircases and onto the fourth floor, but it really sits above the roof of the old shops on Broad Street and we have added a fantastic new terrace to Broad Street which will be fantastic in the warmer months.” 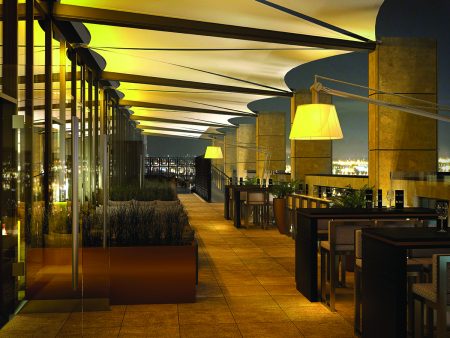 Development work has included the demolition of the old shopping plaza, which was adjacent to the building. This led to a complex demolition programme which saw developers having to carve a new service yard/area and corridor into the bowels of the building to help maintain the existing service access to the retailers that front Broad Street and Islington Road.

The prestigious hotel will be managed by Robin Ford, a serial hotelier with over 11 years’ experience in the industry. Robin will be responsible for the overall leadership and direction of the business, as well as the management of a senior team of 15 and all of the hotels 150 employees. He will also play an instrumental role in the expansion of the Park Regis brand into Europe.

The finishing touches are currently being put into the hotel including flooring, soft furnishings, bars being finalised and the conditioning of the mechanical installations.

Andy concluded: “If you go back over two years ago, when the economy was in a slightly different position, there wasn’t a trememdous amount of building work going on so to add a hotel of this quality, in this location to the city is fantastic. Particularly when you speak to Marketing Birmingham and what they are doing in terms of bringing in and generating business into the city and inward investmant and companies like BBC, Virgin and HSBC and soforth, it is a facility that is going to be very well used by all of these newcomers to the city and I am so sure about that.”

Set up in 2007, by directors Adam Tibbatts & Adrian Abel, Tibbatts Abel is an architectural and interior design practice. Tibbatts Abel specialise in hospitality & leisure projects, with a particular focus on bars, restaurants, hotels and nightclubs.

Past projects delivered by Tibbatts Abel include The Hand & Flowers and The Coach in Marlow, for Tom Kerridge; Jinjuu in London for Judy Joo; Copper Blossom in Edinburgh & The Boozy Cow in Aberdeen & Edinburgh for The Speratus Group Ltd; Brewery Tap in Ware, The Ten Bells in Norwich and The Plough in Bicester for Greene King; and The Rutland Hotel, Edinburgh for Signature Pub Group. In addition, Tibbatts Abel has provided design services for Buddha Bar, London; Tape, London; Charlie, London; and most recently Saint Pauls House in Birmingham for Suburban Inns.

Working on the Park Regis, Birmingham, Tibbatts Abel was the lead designer of the public areas within the hotel, including the reception areas; the ‘1565’ restaurant, bar, lounge & terrace; all conferencing, meeting rooms and banqueting areas; Shakina Urban Spa; the Asian-Fusion sky bar restaurant; and the Rofuto and Kurabu cocktail lounge.

“With our main office being located in Birmingham, we feel privileged to be a part of this local project which will undoubtedly bring further interest and development to Birmingham.”

Maxim Lifting Services Ltd is one of the leading lifting and associated service providers in the UK. They specialise in lifting contracts so are responsible for carrying out consultancy for large construction projects including engineering, road and rail.

Formed in 2009, the company has achieved continuous success by providing expert and diverse services across the board. They have a broad customer base in many different sectors offering each and every client a true one point of contact service to meet any requirement. Whether you require consultancy for a project, contract lifting, plant and equipment hire, traffic management or just some helpful advice, Maxim Lifting are available 24 hours a day, seven days a week, 365 days of the year.

During their six years in operation, the company has completed thousands of projects including work for Joy Global Mining, which involved lifting and aligning sub assemblies for mining equipment for client demonstration in Worcester, Marshall Construction in Leeds, which the company undertook tower crane management for their city centre project. Southside Shopping Centre in London, in which Maxim Lifting provided consultancy and specialist lifting for construction company Bowmer & Kirkland and MB Glass, which sees Maxim providing glass handling equipment for them as well as consultancy and lifting services on many of their projects.

Most recently the company worked on the Park Regis Birmingham project. The company were originally asked to go into the project to undertake consultancy work, as well as provide lifting solutions to install glass onto the Sky Bar, located on the 16th floor of the hotel.

Ben Holliday from Maxim Lifting Services said: “We provided a small spider crane and glass handling equipment to get the glass in and up on the curtain wall on the 16th floor of the building. Then from there we were asked to provide many other services. They had a Tower crane on site so we did some management for them with that and went on to provide every lift for the project. So from the air conditioning, to putting the signage on the side of the buildings and installing steel work – anything and everything that needed lifting, we provided a solution.”

Having worked on the Park Regis project, Maxim Lifting Services were proud to work on a local project.

Ben said: “It means a lot because we are national contractors and work away from Birmingham the majority of the time, so it is nice to be providing a service to the local area and community.

“I am most proud of the efficiency and the professionalism that we carry out on all of our contracts.”