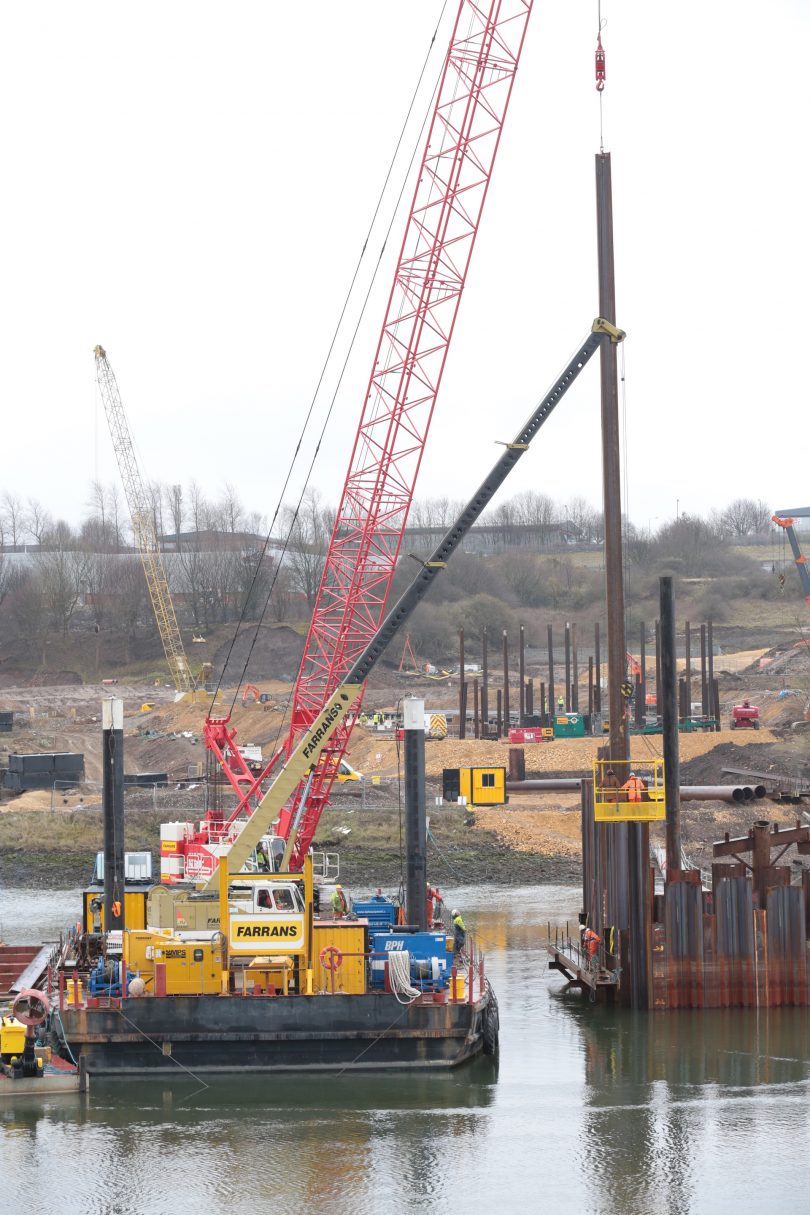 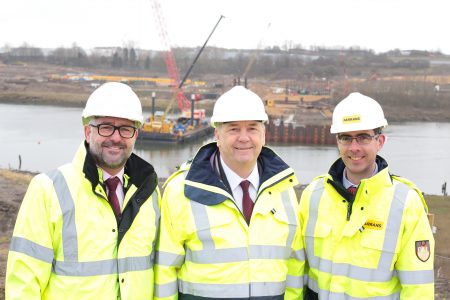 The foundations to Sunderland’s new bridge are about to be built as the huge cofferdam in the middle of the River Wear nears completion – signalling the start of a new phase in the project.

In the coming days, the last remaining work will be carried out on the cofferdam, which is a large steel watertight structure within the river, so that after Easter it can be drained to enable the team to work below the water surface.

The foundations to the main bridge pylon will begin to take shape in the cofferdam in April and the bridge supports on either side of the river will then take shape, ready for the positioning of the bridge deck in the summer.

“The people of Sunderland have waited a long time for this bridge, so it will be wonderful to see the foundations getting underway in the river,” said Councillor Watson.

“A lot of work has already been done, particularly on the south side of the river, to clear the site and prepare the foundations for the approach road, but work will now be stepping up in the river itself and on the north side.

“The benefits of the bridge are going to be significant. Crucially, it will lead to investment in the city, will see land along the south of the river regenerated, and will reduce journey times for motorists. It’s been a long time coming, but I firmly believe it will be a bridge to a better future.”

The end of 2016 will mark a significant milestone in the construction of the bridge when the impressive 105m A-frame pylon is floated from Belgium on a giant barge before being slowly hoisted into position on the river.

Twice as high as Nelson’s Column and taller than Big Ben’s clock tower, it will arrive into the Port of Sunderland and will then be slowly transported up the River Wear in a carefully planned phase of work.

It will take several hours to raise the pylon and secure it in place, creating a spectacle for the people of Sunderland to watch.

The project team has produced a video animation of the three-year bridge-building process and has released time-lapse films showing some of the progress on site to date – they can be view at: http://www.sunderland.gov.uk/index.aspx?articleid=11488

The new bridge will cross the River Wear between Wessington Way in Castletown and European Way in Pallion.

It is the first bridge to be built over the Wear in Sunderland for more than 40 years and is part of the wider strategic transport plan to link the Port of Sunderland and city centre with the A19.

David Abdy, Project Director for Sunderland City Council, said independent economic studies indicated that every £1 invested in construction resulted in £2.84 of economic benefit to the economy.

He said: “When linked with the wider improvements planned for the road network as part of the Sunderland Strategic Transport Corridor (SSTC), the New Wear Crossing will be a key economic driver for future investment in the city.

“The project will help to create thousands of new jobs at development sites along the riverside corridor, will bring new business opportunities to the city centre and the Port of Sunderland, will reduce congestion and improve journey times, and will improve public transport in the city.

“It will also be a striking landmark and feature. It will be something for the people of Sunderland to be really proud of.”

Stephen McCaffrey, Project Director for FVB joint venture, created by Farrans Construction and Victor Buyck Steel Construction to build the bridge, said work would be intensifying during the next few weeks.

He said: “It’s a very complex project using a range of skills, technologies and specific expertise, which is encompassing a large area of the city in both Castletown and Pallion, as well as the river itself, so it’s not straight forward, but it’s going well.

“We appreciate road works in and around the site may be frustrating for drivers, but I can assure people they are necessary in order to upgrade the road network and to ensure both drivers and our workforce are safe.

“I appeal to people to drive carefully and within the speed limits and to bear with us.”

Sunderland City Council is holding a two-phase consultation to find a name for the new bridge. To take part, go to www.newwearcrossing.co.uk