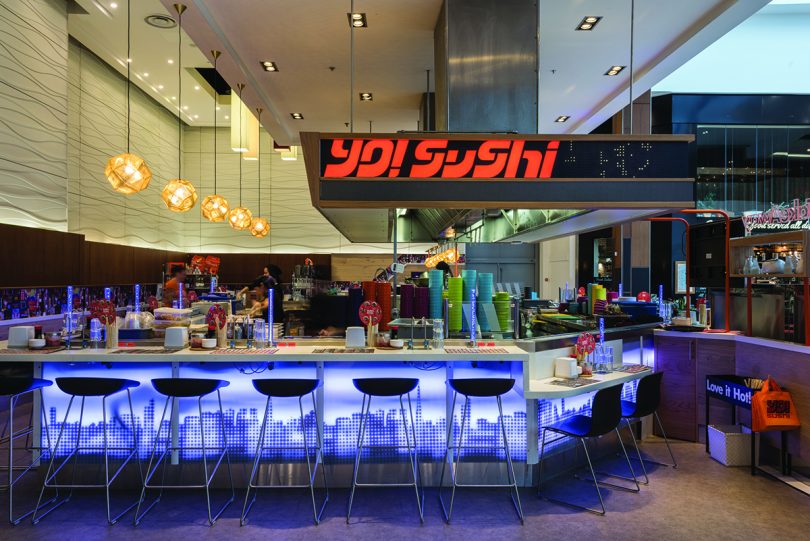 YO! Sushi – Fun, fast and fresh 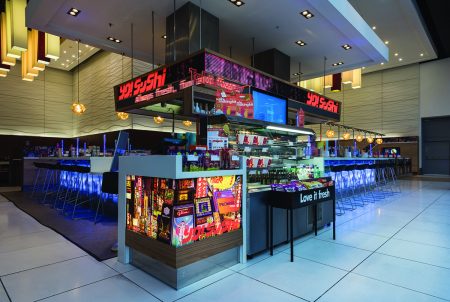 Popular Japanese restaurant YO! Sushi has now branched out to Derby, introducing a playful and tasty concept to the East Midlands city. Since its inception in 1997, YO! Sushi has grown into a successful chain of trendy, cool venues that boast charm and charisma, selling a range of delicious Japanese-inspired dishes.

“The site is located at the new intu shopping centre within the main city centre of Derby – the venue was opened just before Christmas, and the feedback has been very good – it seems to have been very well received which is great.

“We have worked with YO! Sushi since 2005 having carried out the design aspects on the first out-of-town (out of London) YO! Sushi, which was Brighton; following this particular site we have completed several others since.

“The thing with YO! Sushi is that with each time we undertake a venue, we incorporate change. They do not like any of their interiors to match each other; the only constant element is the conveyor belt. Every time we go to design a site we look for different light fittings, new seats, and fresh wall finishes etc. So to constantly be re-examining the brand’s DNA for a client – this does present itself as a challenge.

“YO! Sushi at Derby was a fairly simple site to work on; it has no walls so the dining space just sits in the shopping centre which YO! Sushi is quite well suited to, with its state-of-the-art style and innovative design. 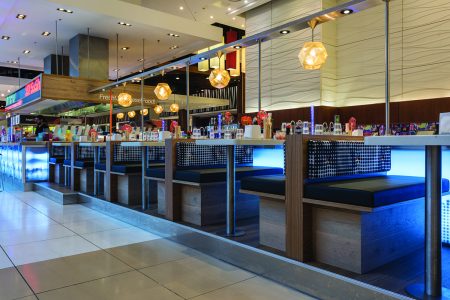 “The influences for the design were the usual for the brand: Japanese, contemporary culture, depicted by a Tokyo skyline that is illuminated on the front panels of the conveyor belt, and then picks up again on the top of the wooden raft feature so it is sustained through the dining space.

“Personally I think that the stand out feature is the LED dot matrix which runs around the belt which displays moving graphics and various messages, adding a sense of fun to the space. The LED dot matrix works so well because it is like an art installation and signage, and it does attract your eye toward the site which is a really nice trick.

“We have faced multiple challenges such as working out where visitors will come from and trying to figure out how to filter them towards the right part of the restaurant. Managing queues as well – that is always a difficult thing to work with; however I think that we dealt with this fittingly.”

Working as main contractor was Matrix idc, who have also worked on several YO! Sushi sites prior to this one, meaning that they also have experience in carrying out developments for the Japanese diner brand.

“It’s great for us to be working on so many of the YO! Sushi sites, it’s really nice – we understand each other. They challenge us constantly on design and on budget to keep both fresh and healthy. It’s been enjoyable – it’s almost 11 years now that we have had this working relationship.”

The trademark YO! Sushi conveyor belt transports the assortment of delectable dishes around the eating area for diners to choose from. The heavenly delights are cleverly categorised by a system that prices individual dishes by the colour of plate. Dishes include crispy salmon skin hand roll, tuna maki, pumpkin katsu, chicken teriyaki, duck gyoza, and prawn katsu curry.