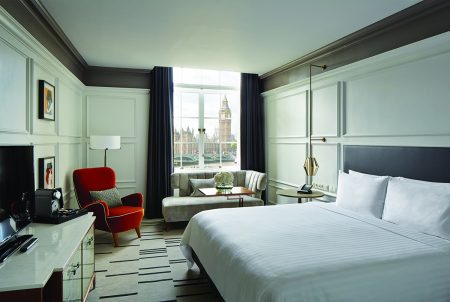 The London Marriot County Hall Hotel is a historic hotel in a stellar location in Westminster, directly on the banks of the River Thames. Hotel rooms provide five-star luxury, contemporary comforts and breathtaking panoramic views of the London Eye, Big Ben and the London Cityscape.

The London Marriott Hotel County Hall has recently received an extensive renovation of its Guestrooms and the iconic Westminster suite with further works taking place in the public areas.

Work on the project began in 2014 with design consultancy RPW Design winning a contract to renovate the interior of the hotel.

Elizabeth Lane, Director of Projects at RPW Design said: “The task which was set was an ambitious project to carry out a full refurbishment of 200 bedrooms within the hotel including a complete remodelling. We really had to take things back to basics, stripping the rooms back to a bare minimum, removing bathrooms and creating a completely fresh and unique design.”

Work on the hotel included the transformation of the 160m long corridors, re-designing bedrooms and a sensitive refurbishment of the listed public areas.

Elizabeth explained: “One of the features of this historic property is the incredibly long corridors. Thus one of the key design challenges for us during this process was to make the corridors more interesting and to create a real journey for guests traversing through them. Before the re-design there were long stretches of cream; we implemented three phases of colour and the inclusion of different wallpaper and artwork to break up that journey.”

The overall creative design of the hotel was left to RPW Design which closely collaborated with the owners to meet their aspirations for the hotel. RPW Design maintained a lot of the original features of County Hall and wanted to incorporate many aspects of the building into the new look.

“The brief was for the hotel to have an authentic sense of place, which is far more common in hotel design today,” said Elizabeth. “Guests appreciate this, because they have chosen a hotel in the heart of London to be immersed in British culture and want the design to reflect that.”

“We also took inspiration from the listed public spaces, to bring a sense of that iconic history into the bedrooms. Contemporary details of the oak panelling and bronze metalwork were selected as a base for the scheme offset by a light palette reflecting its essentially masculine style.”

RPW Design has worked alongside County Contractors who have completed all of the contract work on the project.

Elizabeth added: “The project has been very smooth considering the major challenge of re-planning the rooms. Once we had worked that out we started off with two completely separate schemes for the two distinct floors of rooms. The upper floor rooms have mansard windows and lower ceiling heights, in contrast to the lower floors which had high ceilings and a more standard room shape. But as the project progressed, it ended up being two schemes which actually spoke to each other, which worked well.”

Despite major works being completed on the hotel, there are still some aspects of work to be undertaken.

“We are in the last phase of bedrooms which will be completed in April along with a soft refurbishment of the public areas thus having all the renovated spaces ready ideally in June 2016,” said Elizabeth.

Elizabeth commented: “This project is extremely important for us and from a client perspective as we are working with an iconic piece of British history. We were honoured to be given the responsibility and challenge of sensitively transforming The London Marriott Hotel County Hall whilst giving the spaces that real London feel.”

RPW Design is one of the world’s premier hospitality interior design practices specialising in the creation of stunningly individual interiors. For them, working on the London Marriot Hotel County Hall was of high importance. 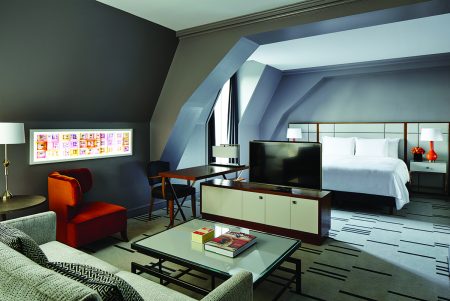 Julian Chichester specialises in the design and manufacture of furniture. The company has been in operation since 1989 and along with the standard collection of furniture Julian Chichester provides a bespoke and case goods service for the trade and Hospitality industry.

Past projects have included The Oyster Box Hotel; The Kensington Hotel; River Beatrice Cruise Ship and Rudding Park Hotel, amongst others. More recently, Julian Chichester provided its services to the London Marriot County Hall, providing a selection of items for public areas and tables for all guest rooms.

“All hospitality work is important to us but the Marriott is such a fabulous household name we are incredibly proud and privileged to be associated.”

“Julian Chichester has been at the leading edge of the UK and US furniture industry for almost 25 years and continues to innovate and inspire. Influenced by his travels and a decidedly modern sensibility, Julian brings a new vision to furniture that is simultaneously unique, yet instantly familiar. The collection maintains the integrity of 19th and 20th Century designs, infused with a modernity that allows it to integrate seamlessly in any environment, whilst retaining its own individual personality.

“Specifiers and Hoteliers alike come to us for our vast selection of exciting finishes and value our unique approach to design.”

La Fibule design a wide range of furniture and accessories, from sofas and armchairs through to lamps, coffee & console tables. La Fibule is an established company with design at its heart and has been creating and producing innovative and eclectic products for 16 years.

La Fibule’s designs and products have been chosen by designers and architects the world over. Their work has been included in schemes for international hotel groups, as well as high-end private projects.

Working on Marriott County Hall, La Fibule was chosen by RPW to provide one of the armchairs that would become a key piece in the design for the new bedroom schemes. The Hepburn armchair chimed with the history of the building and reflected the elegant luxury and modern view of the new look throughout the overall scheme.

“It’s always exciting to be involved in the renewal of a historic London building. The foundation stone for the original building of the County Hall was laid in 1912 so to take part in even the smallest way in its renewal, to continue history, is a privilege.”

“As a leading trade brand, we aim at all times to measure up to the exacting and professional standards of our clients and it is their expectations that keep us challenged and moving forward both in our designs and execution of orders to time and on budget.”