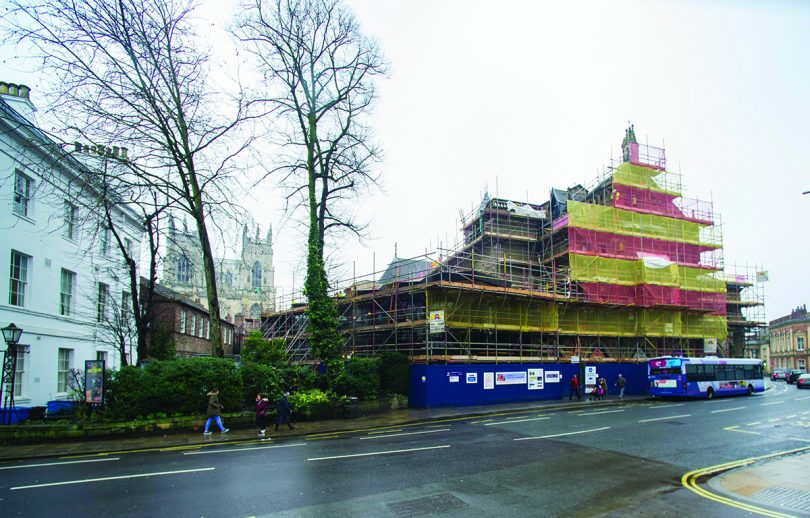 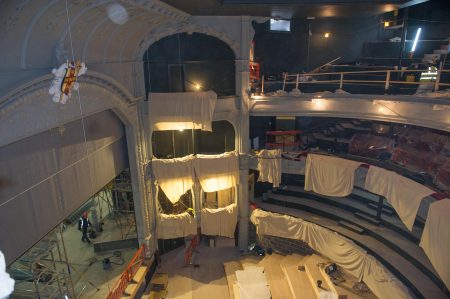 William Birch & Sons have been carrying out an extensive refurbishment of York Theatre Royal, the theatre’s biggest project since it was first built back in 1764 – and the first major refurbishment since 1967. This has proved to be a project with its own unique set of construction challenges.

There’s something very special about knowing that this extensive refurbishment is going to result in bringing years of pleasure to the future audiences and cast of the many shows, musicals and pantomimes the theatre puts on.  Indeed, it is clear how much enjoyment people have had in previous years, judging by the 1970s and 1980s memorabilia found beneath the various floors and behind the walls during the current refurbishment, like snuff boxes, old cigarette/cigar packs, posters, and even an old photograph that was reunited with its owner 60 years after it was lost when a plea was put out by the local paper. York Theatre Royal has been at the hub of York activity for many years and its role will be strengthened when it reopens in the spring of 2016.

In fact, a theatre at York has existed since 1744, albeit not quite in the location it is found today.  The current location was built on the remains of St Leonard’s Hospital, which had been one of the most important medieval hospitals in England.  It was initially thought (prior to the project commencement) that very little of the hospital foundations remained, but it soon became clear that some significant elements had lain beneath the current theatre for a very long time. 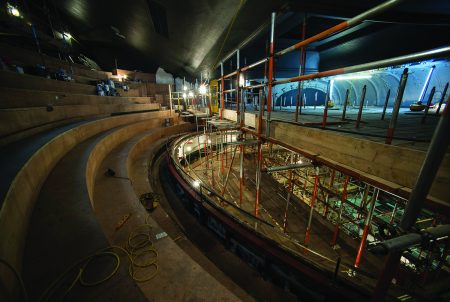 The Theatre Royal project includes works to a number of different areas around the Theatre building, but primarily the main auditorium and works to the front of house to improve leisure facilities for visitors. The existing front colonnade to the building is currently external, and it will be glazed to complement the iconic arches and brought within the building complex to create seating and café/bar areas. Once completed, theatre goers will see the biggest changes in these areas, although there are many more changes going on behind the scenes to turn the theatre into a modern and efficient facility, with a new and state-of-the-art stage, upgraded lighting and improved audio-visual equipment. New seating is also planned for several areas, along with improvements to the stalls to enhance performance viewing quality.

Robert Pell is Contracts Manager at William Birch & Sons and he commented: “York Theatre Royal is a fascinating building on many levels, built up like a patchwork over different time periods. Even the logistics of accessing the building have proved challenging, sited where it is in York’s centre and in such close proximity to its neighbours. We knew from the start of this project that there were a number of ‘unfounds’ that were likely to be revealed as we began peeling back the layers, and indeed the significant remains of St Leonard’s Hospital have been the biggest find here.”

York Archaeological Trust has been investigating and recording the finds beneath the theatre, and carefully retrieving and cleaning artefacts of interest.  A stone gateway has been revealed which is believed to be the original stage entrance for the theatre, and a stone-lined well discovered, along with a cobbled yard.

Ben Reeves is Chief Archaeologist on site from York Archaeological Trust and he said: “It is amazing that, considering all the alterations to the theatre since 1764, so much of the medieval hospital has survived under the stalls and elsewhere within the building.  The remains are an exciting and important discovery for both archaeologists and the public, offering an opportunity to investigate and understand more about one of the City’s most fascinating and little understood sites.” 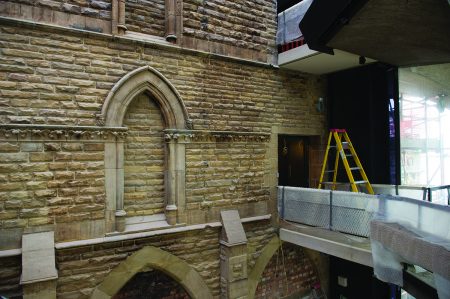 The media interest in the finds has been intense, and indeed there has also been strong interest from members of the local and national theatre-going public, which has needed careful management by the York Theatre Royal team in conjunction with William Birch & Sons. Many visitor tours have been conducted by the main contractor while reconstruction work has been ongoing; a challenge in itself when TV and radio stations have wanted audio commentaries without any background noise.  A documentary programme by the BBC was also produced about the project, and about moving the annual York pantomime to a 1000-seat auditorium at the nearby National Railway Museum.  On top of that, York has experienced some of the worst floods in living memory at the end of 2015 and the start of 2016, which have impacted on many people and on routes in and around York. Fortunately, the theatre excavations have not been too severely affected.

The existing stage at York Theatre Royal has been levelled to improve the versatility of the space, enabling the theatre in future to be able to programme a wider variety of productions, such as dance. This levelling has also improved the sight lines from the stalls.

The theatre’s basement has also been lowered by 600mm. This was to allow a removable mid-section of the stage with head room and also pop-up stages as needed.  The stage within the auditorium is linked to the orchestra pit, beneath which most of the recent archaeological finds were made, including columns and arches.

Work to the main upper theatre gallery has included a complete remodelling and reprofiling for better viewing angles, with significant structural and joinery work.  The dress circle has also been reprofiled to provide disabled access, and carpets have been replaced in the upper dress circle.  Gallery fronts to all three levels at the theatre have required remedial strengthening work and structural improvements, along with lighting bars and brackets. The back of the top two galleries now has new steel supports and specialist plastering to ensure it remains in keeping with the existing theatre, which has been time-consuming work for the William Birch team.  As Rob Pell explains, “There was no Christmas break for some of the specialist craftsmen within the team.  We’ve reprofiled the stalls, which will now meet the line of the first dress circle, and created a new tiered floor as opposed to the previous sloping floor.  It’s really beginning to take shape now.”

Currently in construction fit-out, the theatre’s main auditorium ceiling required some plasterwork repairs – which are now complete.  There are new bars to the ground and first floor, new toilets, and even a new passenger lift.  The lift will enable disabled access to the stalls and to the dress circle for the first time; previously, there was only disabled access to the stalls.

The new theatre foyer will be open plan and the glazed colonnade becomes part of this impressive foyer.

William Birch & Sons have also been busy with external work at the theatre, too, with new masonry, repair and replacement of defective stone where necessary, as well as a stone cleaning and reroofing programme.  Every roof slate has been replaced, two flat roofs replaced and the theatre’s rooflights are now electrically operated.

In a massive programme that began on 30 March 2015. York’s Theatre Royal will see one of the most significant and prestigious transformations in its history, and certainly the biggest project carried out so far, with a total redevelopment value of £5 million including significant Arts Council England support. A fund-raising programme is continuing to ensure this theatre with its fascinating foundations should continue to provide an exciting venue for many decades to come.

Liz Wilson is Chief Executive at York Theatre Royal.  She summed up: “York Theatre Royal contributes to the world class cultural offer in the city through ambitious theatre productions, support for innovative artists and companies and promoting a culture of achievement with a community of collaborators, whether artist or citizen.  This project will support this work in all its glorious diversity and will bring the flexibility essential to a truly sustainable organisation that will continue to grow and evolve.”

Founded in 1874 in York and still family-owned, William Birch & Sons Limited employs around 100 people, of which 10 are currently apprentices, and a staggering 56 per cent of its skilled workforce started as apprentices.  The company has supported joinery, bricklaying and plastering apprenticeships for many years, recently adding technical apprenticeships to its more traditional craft based tradesmen.  It is based in Osbaldwick, with additional offices in Leeds.