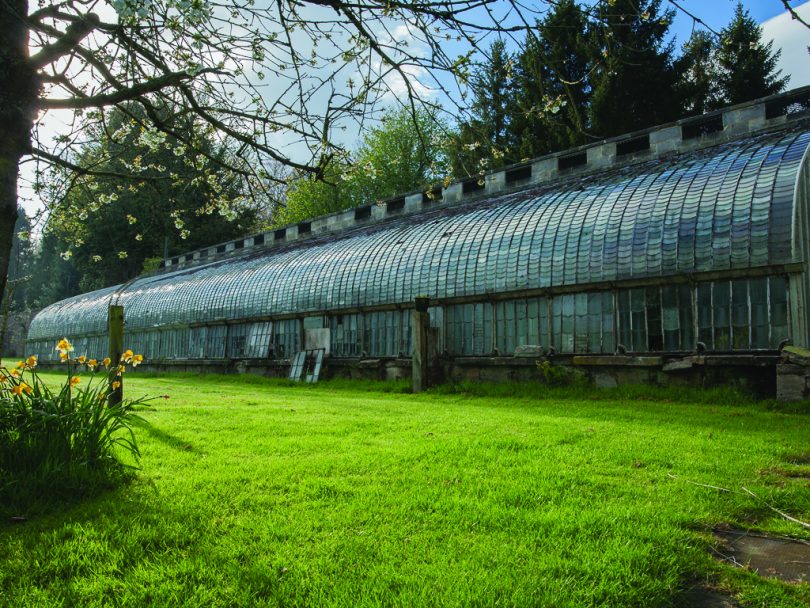 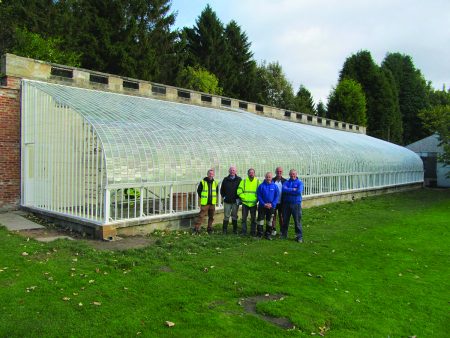 Shortlisted in the Building Conservation category of the RICS Awards 2016 North East,  is an outstanding project which has saved an endangered rare Grade II* listed early 19th Century greenhouse and attached potting shed at Felton Park in Felton, Northumberland.

The project was carried out for a private client. The scheme received funding from Historic England, the Heritage Lottery Fund (HLF), Country House Foundation and Northumberland County Council.

Project architects were Spence and Dower Architects, with Calibre Metalwork as specialist heritage metalwork/main contractors for the scheme.

The greenhouse and potting shed have long been on Historic England’s Heritage at Risk register. The greenhouse is one of about 20 surviving curvilinear metal and glass structures in England and one of only two in the North East.

Built around 1830, it is considered to be a particularly early and complete example of the ‘hot house’ format developed by John Claudius Loudon.

The greenhouse and potting shed sit astride an 18th Century garden wall. The greenhouse, which measures 30m by 6m in total, is in two halves, the west side having been built slightly later.

Robin Dower, partner at Spence and Dower Architects said: “The project was a great feat. Finding the right contractor was a challenge and we were particularly fortunate to find Calibre Metalwork. They were extremely helpful – particularly in assisting in a pilot project carried out prior to the main contract and geared to deciding what works were going to be necessary. I was able to learn a great deal from them and they did a very good job.

“There are very few glasshouses of this period left, as they were usually attached to private country houses and suffered a lack of maintenance due to the shortage of manpower during and after the First World War. In addition, like many country houses Felton Park was requisitioned by British forces during the Second World War.

“The house was damaged, resulting in all but one wing having to be demolished, and there was no-one to maintain the glasshouse which fell into disrepair.”

“The glasshouse superstructure comprises slender wrought iron curvilinear glazing bars fixed into the top of a cast iron frame running along the front of the structure, and incorporating glazed ventilation casements – with the whole structure resting on a low stone wall, and attached to a high brick wall to the rear. Behind the high wall is a brick built slate-roofed potting shed, which had access into the glasshouse. Each of these elements required restoration during the project.” 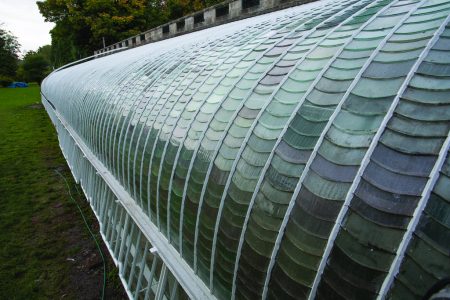 The stonework had been damaged by successive frosts over 180 years and considerable work was required in re-fitting and re-pointing the stone.

Robin Dower continued: “The iron work also required significant restoration with the initial temptation being to remove all of the glazing in order to clean the ironwork. However it was decided that removing the glazing might risk the ironwork becoming distorted since the glass seems to be keeping the bars in place.

“The structure incorporates over 9,000 panes of glass and every one was tested for damage. All undamaged panes were left in situ, with the broken panes being replaced by reeded glass replicas. What particularly impressed me was the seemingly effortless way in which the glazier formed all the new ‘fish scale’ shaped panes.”

The project also included masonry, glazing and roofing restoration work. The works included the stripping and re-slating of the potting shed roof which had leaked previously.

“The owners have now become very enthusiastic about the glasshouse and are using it to grow oranges, lemons, grapefruit and grapes, bringing it back into use,” said Robin Dower.

In addition to repairing the fabric, the project has enabled greatly increased public access to this important site. Visits, talks and local research now place the building in the wider context of early 19th century gardening tastes and ambitions, both locally and nationally.

Steve Gort of Calibre Metalwork said: “We were delighted to be appointed as principal contractor and given the task of refurbishing the glasshouse and potting shed. We are immensely proud to be encouraged by the architects at Spence and Dower to enter the Heritage section in this year’s Constructing Excellence North East (CENE) Awards, for which we are delighted to have been shortlisted down into the final four, with results to be announced at the awards ceremony.”

The restored glasshouse has been shortlisted for the Royal Institute of British Architects North East 2016 awards and was submitted for the prestigious Georgian Group/Savills Architectural Awards for 2015, where it received a commendation in the Garden and Garden Building Restoration section.