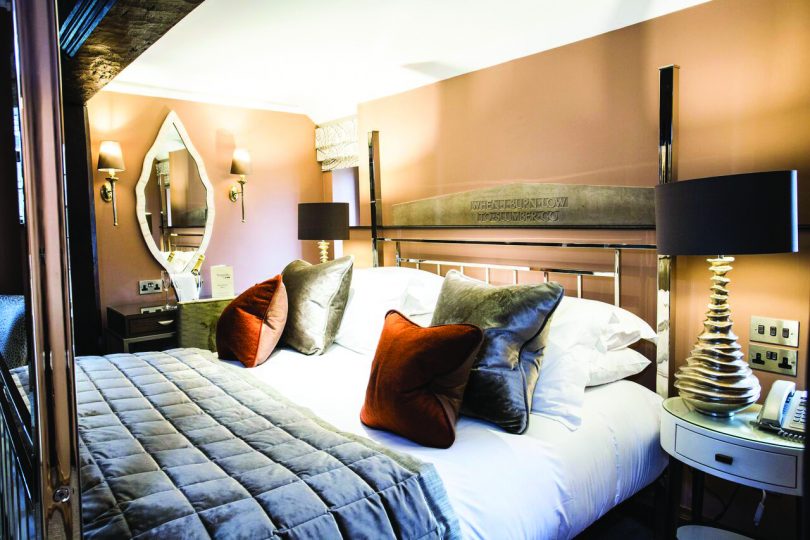 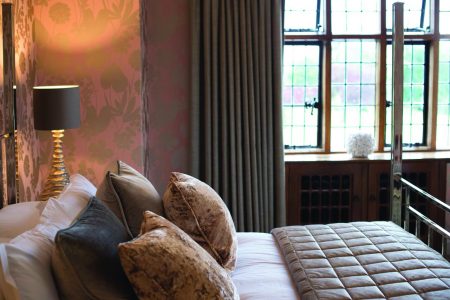 Hogarths Stone Manor Hotel in Kidderminster has recently completed a multimillion pound refurbishment project. The project has seen the hotel revamp its en-suite bedrooms, reception area, lounge, bar and restaurant. A new outdoor ceremony area has also been created in the grounds of the hotel.

Work was undertaken on the project by main contractors Zenith Contractors Ltd with the main architecture undertaken by Trevillion.

Speaking to Premier Hospitality magazine, Sarah Delasalle, Interior Designer at Trevillion said: “When our client bought the hotel in 2015 it was in need of some TLC as hardly any renovation work had been carried out on the building for nearly 30 years. Work began on site at the start of January 2016 and the project was completed over two phases – eight bedrooms and the public areas in phase one, which was handed over in March, and then the final handover of 39 bedrooms and the meeting rooms took place in May 2016.”

Following the refurbishment, the reception of the hotel now has a warm and welcoming feel and sense of arrival. Stone flooring has been used with individual reception desks for a personalised check-in experience with studded detail to petal motifs included. Bold artwork has also been used which reflects the inspiration and palette from the beautiful gardens.

In the restaurant area, the old banquette seating was stripped out and replaced with doors and full height windows which open out onto the gardens. To maximise this, Trevillion used back painted glass table tops to add to the reflections and to bring the outside in.

Sarah commented: “The main focus in the restaurant is the new bespoke three metre oval granite table which creates a wow factor for large parties and doubles as the breakfast servery.”

The wedding and meeting areas have been given a more neutral scheme with artwork bringing an emphasis of colour, creating a backdrop to allow guests to bring their personal tastes into the interior for their celebrations and occasions.

Throughout the public areas, Trevillion has delivered intimate spaces to cater for those wanting to enjoy a quiet afternoon tea and for large groups seeking a private space.

The bedrooms have been designed using the client’s brand colours – hues of aubergine and green and feature laminate to the case goods. The two suite rooms have a softer coral scheme with hits of bronze and a feature four poster bed, all of which have a constant reference to the gardens.

Sarah added: “The mock Tudor features of the building such as the dark timber wall and ceiling beams on the ground floor posed a challenge, especially as our brief was to create a fresh, bright and contemporary scheme. We wanted to incorporate them and make them the back drop for our design instead of them becoming the main focus. By painting the beams the same colour as the ceiling this provided an illusion of height.

“The hotel itself had been extended several times over the years and had become disjointed from area to area. By utilising one carpet design throughout the public areas we were able to give the hotel a much greater feeling of continuity and cohesion.”

Hogarths Stone Manor Hotel is a thriving award winning hotel, having earned four AA Stars, its first AA rosette and the Hotel restaurant of the Year prize in the Midlands category at the 2014 Food Awards England and Wales.

Sarah concluded: “We were delighted to be invited to work with the Hogarth group again on another property within their portfolio. As our client remembered family celebrations and outings at Stone Manor as a child it was really important to us that we made sure that Stone Manor had a welcoming family feel and sense of ease about it. This has been achieved providing a wide appeal delivering style, character and a comfortable country house feel.  It has been a pleasure to watch the scheme evolve from concept to completion and to see the hotel come together as a whole, delivering a complete guest experience.”