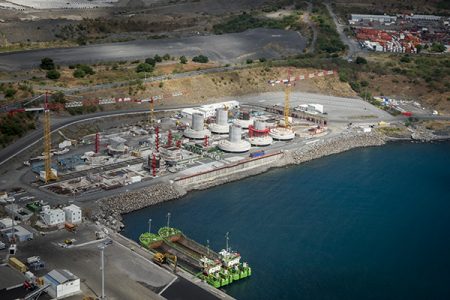 A scenic road, 13km long and widely known as the Route du Littoral, connects the two strategic cities, including for the economy cities on the island of La Reunion in the Indian Ocean – known as Saint Denis and La Possession. Situated at the base of steep volcanic cliffs, the road runs parallel with the coastline.

Presenting breath-taking views, Route du Littoral sees an estimated 80,000 travellers a day; however this means a big hassle and potential danger. Rocks falling from the cliffs provoke regular accidents on the road or block it. Similarly, during cyclonic swell the road often inclines resulting in the closure of several lines – which happens on average on 64 days a year and leads to serious traffic congestion. The effect on trade is dramatic, as 60% of the island’s freight is transported on the Route du Littoral.

In order to make transport and trade safer and more reliable, the public authority in charge (the Conseil Régional) decided to build a new coastal highway, a combination of viaducts and dikes – the construction process is currently underway. The exceptionally large and technically complex structure is a technical solution for the former transport and trade issues, involving onshore prefabrication.

The French consultant EGIS has designed the structures to be built. DHI, as a sub-consultant to EGIS is part of the team designing the road, carrying out physical hydraulic model tests and wave studies to reveal the safest and most cost-efficient solution. Construction works are due for completion by 2020.

Previously, DHI investigated the preliminary design of the road. These investigations included a wave hindcast study of cyclonic waves as well as physical model tests in a wave flume. The current physical model tests will take a closer look at five specific parts of the dikes and viaducts, and include both flume tests (2D tests) and tests in wave basins (3D tests). DHI will document the hydraulic stability of the marine structures and allow EGIS to further optimise their design.

In so doing, DHI’s model tests will assist the client in finding the right balance between the necessary investment and efficiency of the road structure. 2009 saw the construction costs estimated at 1.6 billion EUR. The benefits of the Nouvelle Route du Littoral however, should outbalance the investment, as it averts the loss of life through falling rocks and landslides.

The 5,400 metre offshore viaduct – France’s longest – will connect Saint Denis (the administrative capital of La Reunion) with La Grande Chaloupe. This is a major part of the offshore coastal highway, with two lanes dedicated to public and ‘soft’ modes of transport (bus/bicycle) and which is set to replace the existing coastal road between Saint Denis and La Possession, which is exposed to falling rocks and flooding by swells and tropical storms.

Developments on the viaduct are by means of a technical solution proposed by the consortium in which 95% of the structures will be prefabricated on land and then for the most part, installed by sea. 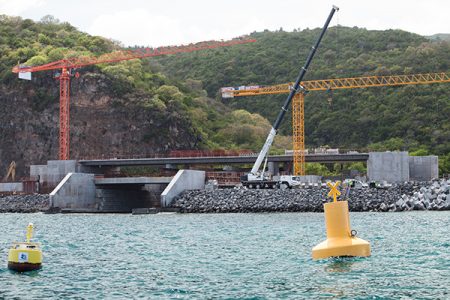 The work of the first phase of the interchange at Possession and the Grande Chaloupe viaduct started in 2014 and is due for completion this year. The great viaduct Saint-Denis will be finalised by the end of 2018.

Following the Route de la Nouvelle-France through Old Québec, Saint-Roch (the city’s first working class neighbourhood) and Limoilou, the architecture of the local buildings testify to the evolution of the city since the founding of the colony. Moving further from the downtown core, houses reflect the influence of French and English culture and the Québécois spirit of innovation.

Many heritage structures and sites can be found along the Route de la Nouvelle-France, including the colony’s first windmill (1651), first pilgrimage site – namely the shrine of Sainte-Anne-de-Beaupré (1658), ancenstral homes, root cellars and many other historical treasures.

Route de la Nouvelle-France has been integrated into the Route Verte provincial bike path network. It is also called Marie-Helene Premont Bike Trail. On foot, by bike or by car, people can follow the signs to the tourist route, enabling them to see some phenomenal views.