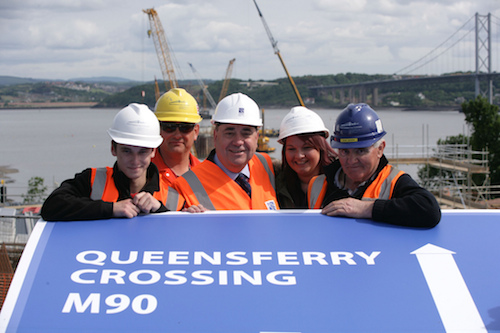 The Queensferry Crossing is due to open in May 2017 and is a hugely significant infrastructure project, which is currently taking shape in Scotland. The stunning globally unique bridge forms the centrepiece of a major upgrade to the important cross-Fourth transport corridor in the east of Scotland, representing a total Scottish investment of £1.325 to £1.35 billion.

Iconic, historic and dynamic, the spectacle of Scotland’s Forth Bridges is a wonder of the modern world. Towering over the turbulent waters of the Firth of Forth, the structures represent the pinnacle of design and engineering. And, with the beautiful new Queensferry Crossing under construction, a new chapter is being written for the site of the world-famous Forth Bridge and its elegant neighbour, the Forth Road Bridge.

Designed to co-exist with the Forth Road Bridge as the main crossing point for cross-Forth traffic, The Queensferry Crossing is being constructed alongside the existing Forth Road bridge and once complete will carry the M90 motorway across the Firth of Forth, between Lothian and Fife.

The project has been implemented in order to provide the local area with a more reliable crossing, which is more resistant to deterioration. A new bridge is being constructed as it was deemed a more viable solution than to repair the existing structure.

Once work is complete on the project, the new Queensferry Crossing will stretch 2.7km in length and will include three single column towers and approach viaducts. The road carried by the bridge will be designated as a motorway and will include two lanes of traffic in each direction. The structure will become the longest three-tower, cable stayed bridge in the world and also by far the longest to feature cables cross mid-span. This innovative design provides extra strength and stiffness, allowing the towers and the deck to be more slender and elegant.

In total the scheme is 13.7 miles long and includes major motorway upgrades to the north and south of the bridge and also the first ever use in Scotland of variable mandatory speed limits to smooth traffic congestion via an Intelligent Transport System. This also controls dedicated bus lanes within the motorway hard shoulders – another first in Scotland.

The structure will be a total of 207 meters above high tide, equivelant to approximately 48 London buses stacked on top of each other and 50 meters higher than the existing Forth Road Bridge. 150,000 tonnes of concrete will be poured to create the strucutre – nearly the same amount used for the entire London Olympic Park and Athletes Village.  The steel required for the bridge deck weighs a total of 35,000 tonnes, enough to make 23 Kelpies and there will be 23,000 miles of cabling used – laid out, this would very nearly stretch around the entire planet Earth.

It is estimated that the construction of the crossing will involve approximately 10 million man hours.

The bridge will be of modern design using the latest techniques and technology. Key features which enhance reliability include:

There have been three main contractors involved with the full scheme. Forth Crossing Bridge Constructors (FCBC), Northern Ireland’s John Graham (Dromore) and a joint venture between Irish contractors Sisk and Roadbridge has already completed an upgrade to the M9 South of the Bridge. The Specimen Design for the Queensferry Crossing was completed by the Jacobs Arup Joint Venture on behalf of Transport Scotland. The Final Design, on behalf of Forth Crossing Bridge Constructors, was undertaken by the Design Joint Venture comprising Grontmij, Giofford, Ramboll and Leonhardt Andra and partners.

To complete such a significant scheme, work on the bridge has been divided into three phases, with the project currently concentrating on the final phase, which focuses on demolition and junction upgrade works, along with the installation of new slip roads.

During the demolition works, road users were encouraged to avoid the area and to make use of all available live traffic updates from Traffic Scotland. Meanwhile, throughout the entirety of the construction programme all environmental impacts are being taken into account, from geology and air quality, through to noise and visual impacts.

In recent months, a milestone has been reached as the road now links to the north shore for the first time. The final segment of deck was put in place which means that the bridge’s north tower joins with the north approach viaduct into Fife. Once connected, a 300mm gap was levelled by counterbalancing the tower deck with a further deck section at the south end of the fan and attaching and tensioning the stay cables to the deck unit. Fine tuning of various temporary loads that the superstructure faced during construction was then undertaken with the gap set to be fully closed later in the year.

High complex work has since begun to ensure a smoooth ride for drivers who will use the crossing once it opens.

When work began on the project in 2006 it initially ran under the name of the Forth Replacement Road Crossing, however in June 2013 the name of the bridge was officially changed to the Queensferry Crossing. The new name was given as part of a ‘Name the Bridge’ contest initiated by Transport Scotland, after being whittled down from 7,600 submitted names.

Members of the public were invited to cast their votes against a shortlist of five potential names including Caledonia Bridge, Firth of Forth Crossing, Saltire Crossing, St Margaret’s Crossing and the chosen name, Queensferry Crossing. The new name was confirmed by Scotland’s First Minister Alex Salmond after receiving more than 35,000 votes – over a third of the entire votes.

The name Queensferry Crossing is shared by the communities on either bank of the Forth Estuary – North Queensferry and South Queensferry. The bridge is named after Queen (Saint) Margaret who established a ferry to carry pilgrims travelling to St Andrews and Dunfermline.

Queensferry Crossing was originally planned to open in December 2016 but numerous delays have meant that the offical opening has been pushed back to May 2017. It is understood that delays have been caused by adverse weather conditions and the brief closure of the site earlier in 2016. Since deck lifting operations commenced in September 2015, the downtime due to adverse weather, specifically wind, has been 40% compared to the antricipated 25%. Until recently FCBC belived that they could mitigate these effects, however the impact of the weather in April and May, with 13 days and 12 days lost to weather, put timescales back – deck lifting will now not finish until the autum of 2016. This means that final stage activities, such as road surfacing and wind barriers, have to be completed in the colder, wetter and more windy conditions usually experienced in autum and winter.

When the new crossing opens in May 2017, the Forth Road Bridge will become dedicated for public transport use, cycling and walking.

For more information about The Queensferry Crossing, or to keep up to date with the latest progress on the scheme, please visit: www.forth-bridges.co.uk/queensferry-crossing.