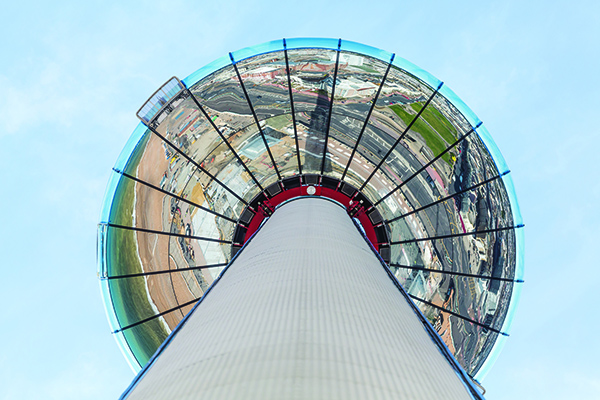 British Airways i360 – Spectacular tower is a global ‘first’ 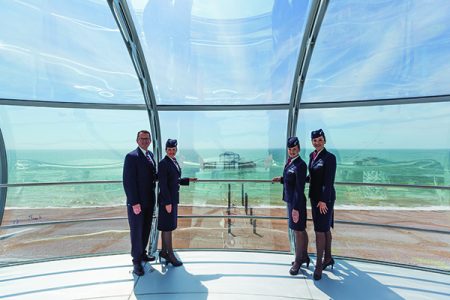 The tower, which opened in August 2016, includes a fully enclosed glass observation pod, which gently lifts groups of up to 200 passengers to a height of 138 metres, offering 360-degree views of up to 26-miles over Brighton and Hove, the South Downs, the South Coast and the English Channel.

Eleven years in the making from design to reality, British Airways i360 is the brainchild of architect-entrepreneurs David Marks and Julia Barfield of Marks Barfield Architects, best known as the practice that conceived and designed the world famous London Eye.

Main contractors for the project were steel manufacturer Hollandia, who manufactured the steel tower.

The aim of the project is to give people a new experience of Brighton and Hove, promote regeneration of the seafront, and to provide an attraction which reflects the public appeal and spirit of the original West Pier in the twenty-first century.

British Airways i360 is designed to operate even in windy conditions and has a series of state-of-the-art measures installed which ensure that the ride is always smooth and safe.

Construction commenced with driving over 2,000 interlocking concrete piles between 10 and 20m deep into the underlying chalk bedrock to provide a temporary support for the edges of the deep excavation for the foundation.

The foundations and substructure of the building and tower comprised the bored concrete piles forming a contiguous piled wall plugged with a mass concrete raft. Having established the final layout in early 2015, the next milestone was to excavate the foundations.

Long reach excavator specialists, WM Plant Hire, visited the project to identify a suitable machine and ensure the production output could be achieved. The 60 tonne long reach excavator played a crucial part on the excavation, reaching almost 10 metres deep into the chalk, below the tidal water level.

Huge amounts of shingle had to be shifted from the base of the new tower and their CAT 349 long reach excavator with 20m reach was able to move over 300 tonnes per hour – this high production rate coupled with their experienced operator proved a real asset to the project.

“The tower construction is truly a world beating and remarkable achievement. The foundation excavation using the large long reach excavator was a key milestone in the project and the successful completion is a credit to the team.”

An innovative construction method meant the tower was essentially built from the top down.

Starting with the 17th, or top can, a jacking tower was used to lift the completed section of the tower upwards, enabling new cans to be inserted below with the assistance of a specially designed skidding track. The final lift weighed 900 tonnes.

The construction of the tower on the 4,150 tonne reinforced mass concrete base started on

Using a 200 tonne crawler crane, with a lifting capacity of 600 tonnes and featuring a 96-metre-high latticed boom, the 60-metre-high temporary jacking tower and seven cans (comprising cans 1, 2, 3, 14, 15, 16, and 17), were stacked and bolted one on top of each other up to a height just exceeding that of the jacking tower. 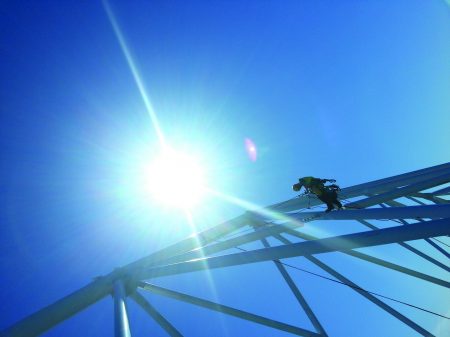 Four strand jacks attached to the collar, each with a capacity of 450 tonnes, gradually jacked up the top four cans within the jacking tower high enough so that the next can could slide underneath on a skidding track, before the tower was lowered and bolted down to the new can. This procedure was carried out 10 times, until the tower reached its planned height of 162 metres.

The viewing pod is 18 metres in diameter and weighs 94 tonnes, including its chassis (which itself weighs 20 tonnes).

The design of the pod is based on an oblate ellipsoid with a cylindrical core removed to allow the tower to pass through. The floor sectors of the pod are supported on 48 trusses which are bolted together and cantilevered off the chassis to support the floor.

A well-established company specialising in the interior fit-out of new and existing commercial buildings – CCI Gatwick work within the medical, education, leisure, catering and predominantly airport sectors and are also engaged in private residential projects.

CCI pride themselves on quality, practicality and a strong knowledge of the industry. They also have a good record for delivering projects within the given timescale and for working closely with clients. The company hold a reputation for encouraging and supporting safe working practice and are proud to be part of a safer working industry that continues to improve.

CCI have been based at Gatwick airport since 1996 and worked on refurbishment and extensions of both terminals, as well as working at all UK airports over the past years. The company are involved with projects ranging from £5K to £2.5million. They have worked with retailers including Lacoste, Musto, Harrods, Molskine, Starbucks, Top Shop, Hugo Boss and many more. CCI have also refurbished the operating theatres and associated areas at the Royal Sussex hospital in Brighton – the specialist cancer care unit, as well as the Intensive care unit within the Royal surrey Hospital in Guildford. Collectively, the company has also delivered 250 new student accommodation rooms as a development at Sussex university in Falmer (Brighton).

For the British Airways i360 project, CCI delivered the interiors and joinery and had input with design where required. James Nugent-Harvey of CCI Gatwick said:

“We enjoy involvement in new and innovative building projects and relish the opportunity to work alongside architects with fresh vision. The i360 is one such project.”

EDGE look after buildings such as the AMEX Stadium, Sussex Heights and Brighton Hospital as well as domestic Regency and Victorian Homes in Brighton and Sussex. Their reputation has gone from strength to strength in the South of England.

Edge Rope Access have been involved with the British Airways i360 project from the start. Their involvement has taken on many different maintenance and construction roles and allowed them to be the first to abseil the whole 162 meters of the iconic structure. They also assisted the first photographer to the top of the tower to get those first shots of the views of Brighton and Hove.  Their work doesn’t stop there; the company will also be involved in maintaining and cleaning parts of the tower in future months.

Premier Hospitality caught up with Tom Clegg of Edge Rope Access Ltd, who told us:

“It was important to be a part of this project because it was local – we pride ourselves in working in Brighton and Hove so this job was perfect for us, and we’ve been lucky enough to be involved with it and to work with such prestigious companies. We are really proud of it and proud of what has been achieved in our wonderful city.”

Nic Bailey Design was established more than 25 years ago, following 10 years at one of the UK’s leading architecture practices. A love of the sea led to researching, designing, building and racing multihull sailboats.

Nic Bailey’s Design first Trimaran design was successfully tested in a record breaking transatlantic race. Since then the company has created the world’s first sailing catamaran for a Paralympic yachtsman, which has also been sailed singlehandedly across the Atlantic.

Racing sailboats demand rigorous attention to structural integrity whilst keeping weight to a minimum for performance, criteria that are equally applicable to projects such as the London Eye and most recently the B.A. Brighton i360. Both of these projects were characterised by a very close working relationship between the lead architects, design collaborators, structural and environmental engineers, glass and steel fabricators across several countries.

Similarly both projects had to weather difficult political and financial climates before starting on site, which makes the satisfaction of seeing them finished and fully enjoyed by their visitors all the greater. All clients of N.B.D. can expect a closely focused working relationship based on mutual understanding and respect. The goal is to make a good idea the best it can be in physical form.

Inwood Developments Ltd specialise in engineered timber solutions for the Construction Industry. Since beginning operations in 1999, the company have gained a great amount of experience providing specialist solutions for a whole range of clients in different industries. This includes working on the Tree Top Walkway at the Royal Botanic Gardens, to an award winning Fishing Lodge in Hampshire and a specialist acoustic ceiling for Wells Cathedral Music Room. Their work took them further afield again to British Airways i360 – where they were contracted to replicate the listed Victorian Toll Booths which form the entrance to the attraction. Being leading timber engineers, experiencing working with laminated timber solutions and dissimilar materials (timber and cast iron) was important it Inwood Develompments Ltd.

“At Inwood we pride ourselves on the quality of our work, whether that’s the quality of design, manufacture or finish. This is evident by Inwood winning two major TRADA Awards (The Timber Research and Development Association) and a RIBA Award (Royal Institute of British Architects) in the last three years.”