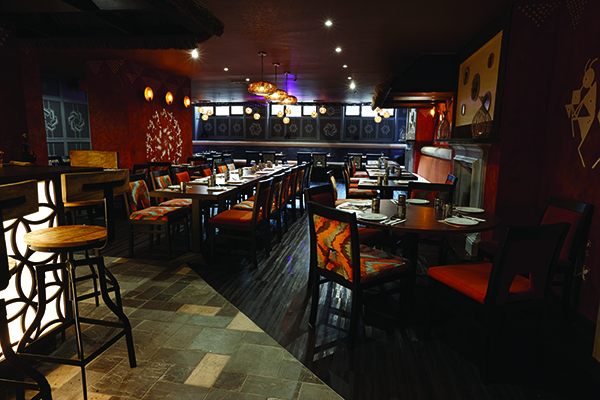 Sanskruti – A feast for the eyes – and the palate 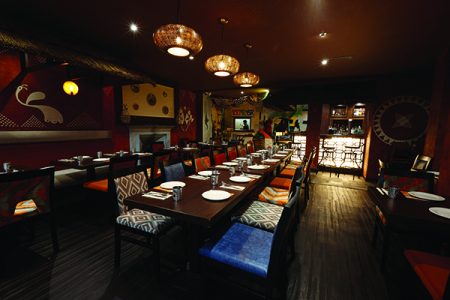 A triumph of imaginative and colourful design, the new Sanskruti restaurant has opened in Liverpool, offering delicious vegetarian dishes unheard of on the standard curry menu and sourced from the four corners of India.

Located on the corner of Ormond and Bixteth Street, the venue is owned by Jay Shokla, whose wife is the head chef.

The new restaurant, which follows on from the success of sister venue Sanskruti Manchester, features a stunning interior combining authentic Indian elements with contemporary styling, imaginative twists and ‘quirky’ original features that set it apart with a unique identity.

Interior designers for the new venue were Decor Fusion and main contractors were GT Shopfitting, who won praise for their work.

Paula Carey, head designer at Decor Fusion said: “The restaurant was within a basement space which had previously been occupied by another restaurant, but the interior, which was decorated in lime green and pink, required a complete strip out and re-design in keeping with the client’s requirements.

“We considered the client’s heritage, their food and the overall mood and feel that they wanted to create and then thought out of the box to deliver something distinctive to make them stand out. Because the windows looking into the basement space are low, we wanted to create something that passers by could glimpse and be tempted to explore further.”

The works included the installation of a complete new kitchen specially designed to prepare the Sanskruti menu, which includes many dishes which are grilled and cooked on the hob. A new bar was also installed.

The design of the interior, which is a large rectangular space, is visually divided into three sections on a theme of ‘dawn till dusk.’

“We included a lot of authentic detail relating to the Sanskruti heritage – such as wall-mounted Indian artwork and murals, together with tiny pieces of mirror to reflect the light and give a three dimensional effect.  Existing fireplaces in the space have been made to look as if they are old and used,” said Paula Carey.

On the left side of the space the colours include soft blues and greys reminiscent of morning, whilst the central section features an overhead thatched Indian style canopy to give the impression of outdoor dining, with the colour scheme changing to warmer shades including terracotta, oranges, browns and beiges, to give an impression of the sun’s midday heat. 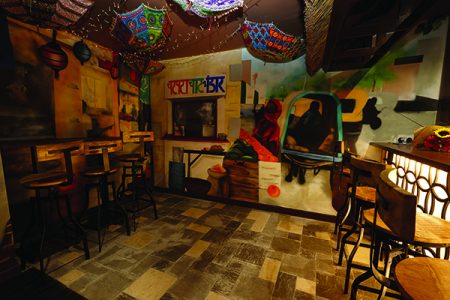 The bar area to the right of the space has been designed as an evening ‘street’ scene. This area incorporates high tables and seating and a drop down hatch through which the kitchen can be seen, and has been designed to give the impression of food being served from a street cart. Rustic tiles around the bar, together with upside down umbrellas and fairy lights on the ceiling, as well as 3D artwork add to the overall impression.

The reminder of the space features both banquette and moveable seating, decorative copper lighting and dark wood flooring.

The venue opened in August 2016 and is doing well. “GT Shopfitting did a very nice job, the clients are very happy with the design and the venue is doing well, with word really beginning to get around. When you taste the food, it is absolutely stunning. The only difficulty is in choosing from the wide selection on the menu,” said Paula Carey.

“Sanskruti” which means tradition or culture is derived from the word ‘Sanskrit’ which is believed to be world’s oldest language originating in India.

According to Sanskruti: “We believe nothing represents India more than its classical cuisine and vibrant culture, which we express in each of our dishes. We offer a wide variety of choices, many of which you are unlikely to find at any other restaurant in Liverpool.

“We use only the freshest ingredients in all of our dishes, offering a menu that traverses the Indian sub-continent: from the ‘Thalis’ of Gujarat to the ‘Dosas’ of South India and from the ‘Chaats’ of Mumbai to the rich, unforgettable taste of North Indian curries.”